The Aid From Women No One Counts 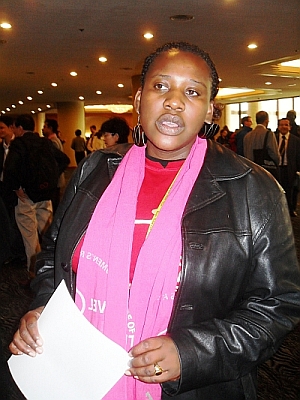 “In Africa, a majority of women spend a majority of their working hours doing chores that sustain life such as cooking, cleaning and fetching water while producing and caring for the human resource,” Richard Ssewakiryanga, executive director of the Uganda National NGO Forum, told IPS.

Women’s work is unacknowledged, unaccounted for and, therefore, unremunerated, said Ssewakiryanga, a member of the BetterAid Global Facilitation Group.

Development founded on equality between men and women is both a way of respecting human rights and a means to achieve the Millennium Development Goals (MDGs), established in 2000 by the United Nations towards improving the lives of people in developing countries.

“Unfortunately, a lack of integration of women’s empowerment and gender equality into poverty reduction strategies, political participation and sustainable development will make it difficult for many African countries to achieve MDGs, especially that on reducing extreme poverty and hunger,” explains Wilfred Subbo, a lecturer in the University of Nairobi.

This is mainly due to the fact that women and men experience poverty in very distinctive ways, Subbo said. Women may earn less money for the same work provided by men just because of their gender. Interestingly, when men take up work considered feminine, such as nursing, they are paid more.

At global fora, such as the Global Women’s Forum within the Busan Civil Society Forum, ahead of the Fourth High Level Forum on Aid Effectiveness starting here Tuesday, the issue of women’s empowerment and gender equality is at the core of discussions.

“Regarding Africa, it is common to hear politically correct calls towards improving maternal health, reducing HIV prevalence among women who continue to account for at least 60 percent of the disease burden and even a call for more women to access education as can be seen in the MDGs,” said Ssewakiryanga.

“But where is the financial commitment? Gender responsive budgeting needs to be part of aid effectiveness,” Ssewakiryanga said.

Financial commitment, which ensures that women are able to access education will keep them in school and reduce their fertility rate. Additionally, it improves their ability to access better paying jobs, hence moving away from casual labour where remuneration is poor.

This commitment has been driven by various stakeholders, particularly the U.N. Women, an entity which works for the empowerment of women who have popularised gender responsive budgeting as an important tool for governments in planning.

When the government of Morocco in North Africa increased the number of primary and secondary schools across the countryside the idea was to improve access to education, but it was not prepared for the reality on the ground when statistics revealed that 80 to 90 percent of girls do not go to school.

According to Morocco’s ministry for social development, family and solidarity, this situation had been a product of traditional models of building capacity through education where the focus was on how many children were going to school without assessing the gender disparity in the education system.

Fortunately, through gender responsive budgeting, which is a critical tool that identifies women’s needs and aligns them with national budgets, the government has begun moving from a gender-blind increment to women’s enrolment in education.

“The African story has many similarities, most of these countries have a ministry that is concerned with not just women, but women and gender issues,” says Tafadzwa Muropa, co-coordinator of the Gender and Economic Alternatives Trust.

“In Zimbabwe, in the southern part of Africa, the ministry of women affairs, gender and community development was established decades ago, yet we are still a long way before we can attain women empowerment and gender equality,” says Muropa.

There has been a lack of financial commitment by African governments towards interventions that can improve the condition of women, she says.

Muropa adds: “The U.N. Women is one of the donor organisations that have consistently been on the forefront of building the capacity of the civil society organisations to be able to push their governments into gender responsive budgeting.

This negative attitude towards a ministry that deals with the issues of women and children provoked the government to redesign it into the ministry of gender and children’s affairs.

Despite the promulgation of an unprecedented gender sensitive constitution, gender responsive budgeting is still limited to provision of free sanitary towels to school-going girls and improving cervical and breast cancer screening.

African governments, delegates agreed, need to invest in women through their national budgets and through transparent and accountable initiatives which ensure that women are both actors and beneficiaries in the development agenda.