UXBRIDGE, Canada, Nov 10 2011 (IPS) - Countries have chained themselves to a fossil fuel train that is headed straight off a cliff, warns the International Energy Agency (IEA). 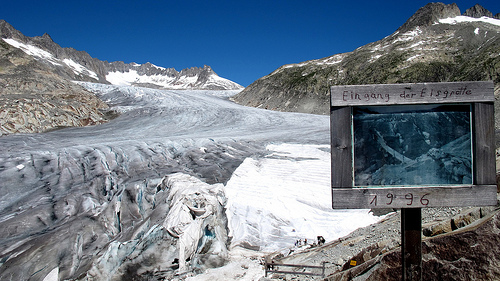 Without a bold change of policy direction, the world will lock itself into an insecure, inefficient and high-carbon energy system, the IEA said Wednesday in London on the release of the 2011 World Energy Outlook.

Sounding very much like Greenpeace, the conservative IEA called for urgent action by governments to massively shift from fossil fuels to renewable energy and boost energy efficiency. Without a major shift in priorities in the next five years, there will be enough fossil fuel infrastructure in place to guarantee a two-degree C rise in temperatures, it warned.

“We cannot continue to rely on insecure and environmentally unsustainable uses of energy,” van der Hoeven said in a release.

“Delaying action is a false economy,” the World Energy Outlook report emphasises. Every dollar of investment in cleaner technology before 2020 avoids the need to spend an additional 4.30 dollars after 2020 to compensate for the increased emissions, it said.

No climate scientist considers a two-degree C temperature increase “safe”. In fact, many experts, along with more than 100 countries, want overall global warming to be limited to less than 1.5 degrees C.

The IEA’s urgent recommendations come on the heels of a U.S. Department of Energy announcement last week that global carbon emissions jumped six percent in 2010, the biggest increase ever. That puts the world on the road to a worst case scenario of six degrees C of global warming by 2100.

The IEA is anything but radical or unconventional. Created in 1974 by the Organisation for Economic Co-operation and Development (OECD) after the 1973 oil crisis, its focus was providing reliable and scientific information on the global oil supply. The Paris-based IEA now provides information and research on all forms of energy. In 2007, it awoke to the role energy plays in the climate change crisis.

“IEA has been driven by political agendas to keep a prominent role of nuclear power and CO2- capturing coal power plants in its scenarios, despite their obvious failure to deliver against false expectations,” he said.

The IEA World Energy Outlook is a projection of world energy demands from 2010 to 2035 and offers scenarios on how government and industry can meet those demands.

The first main scenario is a “New Policy Scenario” that assumes current government commitments to limit carbon emissions are met, combined with a 33-percent increase in global energy demand. Nearly all of that increase in energy will be from non-OECD countries.

The “New Policy” scenario is by no means a worst case scenario, but it still results in global temperature increase of 3.5 degrees C by 2100. Doing nothing brings us to a cataclysmic six degrees C, it acknowledges.

The other IEA scenario, called the “450 Scenario”, has the goal of keeping global temperature increases to a maximum of two degrees C. It calls for the same levels of renewable energy infrastructure as the Greenpeace basic “Energy [R]evolution” report projection, Teske told IPS.

“The IEA is still moving far too slow,” Teske said. It continues to underplay the role of solar, and the idea that carbon capture and storage (CCS) can adequately reduce emissions from coal is nonsense, he said.

Most CCS pilot projects have been shuttered due to high costs and it is almost impossible to pump carbon underground in Europe.

“It is illegal to do it in Germany,” he noted.

However, the IEA continues to foster the perception that there is still a major role for the fossil fuel sector in meeting the world’s energy needs for many decades to come. That indirectly assures the financial industry that continued investments in existing and new fossil fuel infrastructure are a good bet, Teske said.

The European Union and countries like China are shifting quickly to renewable energy sources. Wind and solar now account for 11.4 percent of China’s electricity, and that figure will be 20 percent by 2020, Liu Qiang, a researcher at the Energy Research Institute of the National Development Reform Commission in China, told IPS previously.

Other detailed energy studies have found that 100-percent renewable energy for the entire planet is doable by 2050. The cost is about two to three percent of global GDP (gross domestic product) from now until 2035, and then the costs decline and begin to generate a return, said Niklas Hoehne of Ecofys, an energy consulting company based in the Netherlands.

Ecofys published a technical study in 2010 called “The Energy Report” that demonstrates how the world could reach 100 percent renewable energy by 2050.

“If you ask me one single policy item which could help us to get there, I would say (eliminating) the fossil fuel subsidies in major non-OECD countries,” said Fatih Birol, IEA chief economist.

The World Energy Outlook has previously called on governments to end their annual 409-billion-dollar subsidies handout to the fossil fuel industry. However, no governments have substantially reduced those subsidies, demonstrating one of the major challenges of getting off the fossil fuel train.

“As each year passes without clear signals to drive investment in clean energy, the ‘lock-in’ of high-carbon infrastructure is making it harder and more expensive to meet our energy security and climate goals,” concluded Birol.