WASHINGTON, Nov 2 2011 (IPS) - Amid growing tensions in the Middle East, including speculation about a possible Israeli attack on Iran, a key U.S. Congressional committee Wednesday approved two bills that would impose sweeping new economic and diplomatic sanctions against Tehran. 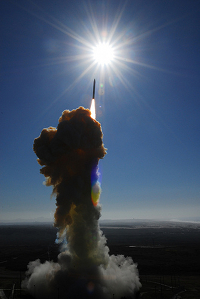 Israel test-fired a long-range ballistic missile, similar to this one, on Nov. 2. Credit: U.S. Missile Defense Agency/CC BY 2.0

The legislation, which includes sanctions against Iran’s Central Bank and strict curbs on official diplomatic contacts between Washington and Tehran, was approved unanimously by voice vote of the Foreign Affairs Committee of the House of Representatives.

The Committee chairperson and major sponsor of the legislation, Florida Republican Rep. Ileana Ros-Lehtinen, said she hoped the whole House and the Senate would act quickly on the two bills so that their enactment would “hand the Iranian regime a nice holiday present”, presumably a reference to the Christmas holidays.

But lobbyists on Capitol Hill predicted that the Democratic-led Senate would be unlikely to act until after the New Year and that, barring any major new crisis between Tehran and Washington, the legislation’s more radical provisions would eventually be watered down.

Still, the fact that such draconian legislation is making headway in Congress is likely to further stoke rising tensions in the region, particularly in the wake of U.S. accusations last month that “elements” of Iran’s government plotted to assassinate the Saudi ambassador here and simmering press speculation that the government of Israeli Prime Minister Binyamin Netanyahu is actively considering an attack on Tehran’s nuclear facilities.

Indeed, Israel’s test-firing Wednesday of a long-range ballistic missile – the first such test in more than three years – appeared designed to heighten the speculation. The fact that the test was overseen by Defence Minister Ehud Barak, who, along with Netanyahu, is reported to favour an attack, did nothing to dispel that notion, despite denials by the government.

According to some observers here, the war talk in Jerusalem may be intended primarily to encourage lawmakers here to support the strongest possible sanctions legislation, which Netanyahu has repeatedly called for over the last several years.

“My guess is that this sudden campaign on the part of the Israelis is intended to scare the U.S. and the Europeans into a very strong diplomatic and economic response when the IAEA (International Atomic Energy Agency) report providing additional information on Iran’s weaponisation activities comes out next week,” said Barry Blechman, a nuclear proliferation expert at the Stimson Center here.

“The bluster on military strikes tends to coincide with periods in which new sanctions are considered,” noted Trita Parsi, president of the National Iranian American Council, which opposed the legislation approved by the Foreign Affairs Committee.

“The Israelis push this on the U.S. and the EU (European Union) by arguing that, absent new strong sanctions, Israel will be ‘forced’ to do strikes, and the U.S. then uses that argument to push sanctions on other states in and outside of the (U.N. Security Council). We’ve seen this pattern several times before,” said Parsi, author of an award-winning 2007 book, “Treacherous Alliance”, on the history of secret dealings between the U.S., Israel and Iran since 1979.

If that indeed was Israel’s intent, it seems to have succeeded in the House Committee where Democrats joined Republicans in expressing the need to punish Tehran.

The first bill, the Iran, North Korea and Syria Nonproliferation Reform and Modernization Act, would impose penalties against any individual or company – foreign as well as domestic – that has facilitated the transfer of equipment that could be used in Iran’s nuclear programme. It also would bar access to the U.S. of any vessels that have visited ports of any of the three countries in the last two years.

Among other provisions, it would sharply reduce the president’s authority to waive existing sanctions against any individual, company or country doing business with Iran; expand existing sanctions against companies that sell Iran refined petroleum to include any barter transactions; and impose sanctions against any individual, company or country that conducts a transaction with the Islamic Revolutionary Guard Corps (IRGC), which is believed to control as much as 40 percent of the Iran’s national economy.

One provision would eliminate the president’s authority to waive, for humanitarian reasons, sanctions against companies that sell spare parts or repair services to Iran’s civilian aircraft industry, which has suffered more than 1,000 deaths in plane crashes over the past decade, in major part due to faulty or worn-out equipment.

A second provision would ban any contact between any person employed by the U.S. government and any Iranian official or agent unless the president certifies to Congress at least 15 days in advance that a failure to make such a contact “would pose an unusual and extraordinary threat to the vital national security interests of the United States”.

“If enacted, this legislation …would prevent any exploration of ways to resolve disagreement over that Iranian nuclear program that we are supposedly so intensely concerned about,” wrote Paul Pillar, the U.S. intelligence community’s top Near East analyst from 2000 to 2005, on his blog on the nationalinterest.org website.

“…And it would prevent any diplomacy to keep U.S.-Iranian incidents or crises …from spinning out of control, unless the crisis conveniently stretched out beyond the fifteen-day notification period,” he added, noting that the nuclear stand-off between the U.S. and the Soviet Union during the Oct 1962 Cuban missile crisis lasted 13 days.

“It is impossible to imagine any purpose being served by such a provision other than enabling politicians to express once again how much they hate Iran and how implacable they are willing to be toward Iran,” noted Pillar, who now teaches at Georgetown University.

A third provision would require the president to determine within 30 days of the bill’s enactment whether Iran’s central bank is supporting the country’s alleged biological, chemical, nuclear, missile, or advanced conventional weapons programmes, supporting the IRGC, or aiding international terrorism.

If such a determination were made, the president would then be required to ban any foreign bank that does significant business with Iran’s central bank from engaging in economic activity in the U.S.

Even Washington’s European allies are known to have serious reservations about such a far-reaching step, which, administration officials have quietly warned, would almost certainly be challenged by Russia, China, and other major emerging countries, as well as provoke a nationalist response in Iran that would strengthen more hard-line factions.

“Today’s actions by the House Foreign Affairs Committee to legislate even more draconian, extraterritorial and unilateral sanctions on Iran …fly in the face of facts on the ground, the demonstrable failure of previous sanctions to achieve their stated purpose, and the basic rules of diplomacy among nations,” said Bill Reinsch, president of the National Foreign Trade Council, a business association representing U.S. and foreign multinational corporations here.

“The Committee’s approach would foreclose any constructive engagement by the administration and put the United States on a forced march to counter-productive confrontation,” he added.