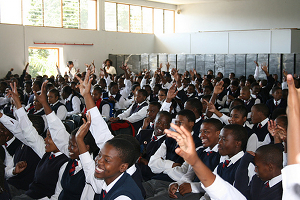 If the U.S. government does not change its position, Africa and war-torn regions are likely to be most affected by the UNESCO funding cuts. Credit: Mantoe Phakathi/IPS

The U.S. move came after a vote by UNESCO’s member states to grant Palestine full membership in the organisation a week ago.

“The withholding of U.S. dues and other financial contributions – required by U.S. law – will weaken UNESCO’s effectiveness and undermine its ability to build free and open societies,” the agency’s director- general Irina Bokova said.

“U.S. funding helps UNESCO to develop and sustain free and competitive media in Iraq, Tunisia and Egypt,” she stated. “In Afghanistan, U.S. support is helping UNESCO to teach thousands of police officers to read and write.”

Bokova said that UNESCO literacy programmes in other areas of conflict “give people the critical thinking skills and confidence they need to fight violent extremism.” She added that UNESCO was also training journalists to cover elections objectively “to sustain the democratic spirit of the Arab Spring.”

The United States said it would withhold U.S. dues amounting to some 60 million dollars that it had been scheduled o pay before the end of this year, because U.S. law bans contributions to the U.N. or any of its specialised agencies that grants Palestine membership as a state.

Bokova appealed to the “U.S. administration, Congress and the American people to find a way forward and continue support for UNESCO in these turbulent times.”

The Palestine issue has created turbulence at the 36th session of the General Conference – one of UNESCO’s two decision-making bodies – that began Oct. 25 and ends this Thursday.

Delegates to the conference saw unprecedented media attention and heightened security as Palestine pursued its bid to become a full member of the agency, despite pressure from the United States and some other countries for a “no” vote.

Last week, in a roll call of member states, 107 countries voted in favour, with 14 against and 52 abstentions. A surprise “yes” vote came from France, while Africa’s overwhelming support was summed up by Sudan’s response: “Yes. Now. Yes.”

Wide approval also came from the Asian and Latin American member states, along with expected support from China, India and the Arab nations, including the new Libyan administration.

The outcome was greeted with loud and prolonged applause by many of those present. Numerous countries explained their way of voting with monologues that seemed largely self-serving against the backdrop of their own domestic problems.

The United States said that Palestine’s membership was “premature” without a solution for lasting peace. Some of the other states that voted against or abstained said they did so because the U.N. Security Council was already considering a request by Palestine to be recognised as a state.

That appeal, made Sep. 23 by the president of the Palestinian Authority, Mahmoud Abbas, might now be boosted by the UNESCO acceptance. But the United States has a veto vote in the Security Council which it has indicated it will use.

If the U.S. government does not change its position, Africa and war-torn regions are likely to be most affected by the funding cuts. UNESCO, for instance, supports mobile schools in countries such as Kenya, reaching nomadic populations, and it has tried to promote gender equality in education in countries that discriminate against women.

Bokova, who has made the education of girls and women a personal priority since she became director- general two years ago, said after the vote that it was the “responsibility of all member states to make sure that UNESCO does not suffer unduly.”

“I am thinking of those thousands of girls and women in Afghanistan, and Africa and around the world who have learned to read and write with the help of UNESCO,” she said.

Some Palestinian delegates said they hoped the United States would change its stance. The U.S. is the biggest financial contributor to UNESCO, accounting for 22 percent of the budget, or about 80 million dollars in dues and other funding annually. It’s followed by Japan, which abstained in the membership vote. Each member state has one vote, regardless of its size or contribution to the budget.

Palestine’s foreign minister Riyad al-Malki, who gave an impassioned address to the General Conference ahead of the vote, told journalists afterwards that his delegation was worried about the funding issue.

But he said that UNESCO had managed to continue in the past, when the United States withdrew from the organisation between 1984 and 2003. Al-Malki also said that the vote had nothing to do with the request to the U.N. for recognition of statehood.

“We’re talking about very specific areas – education, science and culture – and we wish to play our role fully here,” he told journalists, adding that Palestine had been trying to become a member of UNESCO for 22 years, while the U.N. request was made only recently.

Supporters of Palestine expressed pleasure at the vote’s outcome but said they too were concerned about the impact on UNESCO.

Malta’s ambassador to UNESCO, Dr. Ray Bondin, said that the U.S. law was initially about the Palestine Liberation Organisation and should not be applied to Palestinians today.

“This is a nation. This is Palestine. They have a right to be there like all of us,” he told IPS. “What right do we have to tell them no? President Abbas has gone a very long way towards trying to calm the waters in the area and to bring peace. It’s not easy for people who’ve suffered for so many years.”

Bondin said that despite any consequences, Palestine “must be recognised for what they are – a separate nation – and be allowed to negotiate as a nation.”

He said that UNESCO was about culture and heritage and not about political matters. “This (vote) is correct for UNESCO,” Bondin said. “This is a step that will be recognised in history as very important.”

Similar to many African states, Gambia’s delegate Bojang Sukai said Palestine’s membership was overdue, although Africa may experience penalties as a result.

“It’s a way forward and I think UNESCO should be congratulated for providing a platform for the recognition of Palestine,” she said. “It’s about time for the Palestinian people to be empowered and given the opportunity to play their role on the world stage.”