U.S.: Occupy Movement Pushes Back in Coordinated Day of Action 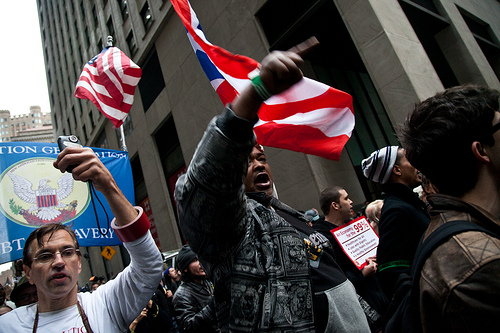 The headcount at Manhattan's Foley Square and surrounding streets was upwards of 10,000. Credit: Lauren DeCicca/CC BY 2.0

WASHINGTON, Nov 17 2011 (IPS) - Tens of thousands of people in hundreds of cities across the country flooded streets, public squares and university campuses in the largest nationwide action since the first group of occupiers set up its encampment in New York City exactly two months ago Thursday.

The day of action came partly in response to several mayoral decisions – from New York City to Portland, Oregon, to Oakland, California – to “shut down” and “clear out” various encampments of the occupy movement.

Thursday’s wave of protests came on the heels of numerous reports of police brutality, including the New York City Police Department (NYPD)’s use of a long range acoustic device (LRAD), or sound cannon, against occupy Wall Street protestors in lower Manhattan Thursday.

In numerous cities from coast to coast, the police have been cracking down on peaceful protestors, prompting hundreds to march with signs picturing riot police under the words, “to understand who is looking for a riot – see who came dressed for a riot”.

In Philadelphia, home to the world’s biggest prison population, protestors today carried signs proclaiming, “We are the 98 percent – one percent of us are in prison.”

Earlier on Thursday the encampment and other protestors marched through the streets of Center City to the Market Street Bridge, intending to occupy the bridge so that city officials and the “one percent” of the country’s wealthiest would experience what thousands of people in Philadelphia face every day – broken roads, rotting bridges and decrepit overpasses.

An organiser for Occupy Philadelphia, which has suffered many setbacks, infighting and a storm of police violence, told IPS, “The people of colour (POC) group of occupy Philly have led an aggressive campaign confronting Philadelphia City Council against the city’s curfew laws which are (hounding) and incarcerating youth of colour,” adding that a slew of other actions was in the works.

Among a host of other demands, many among the Occupy Philadelphia movement are demanding “education not incarceration” of youth, particularly for low-income young people of colour.

Jessica, another member of Occupy Philly, told reporters Thursday that “media coverage at the local level has been overwhelmingly negative in the past two weeks,” despite the daily distribution of press releases and media packages, and urged the independent media to accurately depict the picture on the ground as scores of organisers struggle to provide food and shelter, hold General Assemblies, ensure public cleanliness and safety and connect with other occupations around the country.

Meanwhile, just before dawn on Thursday morning, university police, accompanied by police from about five other jurisdictions, raided the Occupy California camp on the University of California campus.

They removed some 20 tents; 38 of the 40 occupiers chose to leave rather than face arrest.

Students from Occupy California joined Occupy San Francisco for a march through San Francisco’s financial district, targeting a member of the regents of the University of California, who also sits on Bank of America’s board of directors.

A group of demonstrators occupied the bank for several hours, resulting in 95 arrests. A day before, police dismantled some 15 tents just outside the Occupy San Francisco site. Occupiers at the site have met with the mayor and are responding to requests for better sanitation and other health-related improvements, according to a recent press release from Occupy San Francisco.

The Occupy Oakland General Assembly decided to occupy an empty lot near Oscar Grant Plaza after their original site was dismantled. On Saturday, they plan to occupy this space as part of a labour-led march.

Another encampment at a park about a half-mile from the original site has been occupied by many of those who had been occupying Oscar Grant Plaza. Police released all Occupy Oakland protesters arrested Monday morning, except one person who reportedly has been taken into custody by immigration officials.

Earlier this afternoon, the two encampments of Occupy D.C’s Freedom Plaza and McPherson Square slumbered in the calm before the storm, but planned to march along the Francis Scott Key Bridge connecting Georgetown with Northern Virginia.

A member of Occupy Chicago told a conference call for alternative media Thursday that the Mid-Western movement was a composite of diverse groups and a broad spectrum of concerns, including Occupy the Hood, and were engaged in a “wide variety of daily programming, teach-ins, rallies and marches to show “Mayor 1% (Rahm) Emmanuel that police brutality will not stand.”

But it was New York City, the birthplace of the occupy movement, that drew the largest crowds Thursday. Numerous live streams and tweets fed the world real-time accounts of the largest march in two months.

Mayor Bloomberg’s attempt to dismantle the encampment earlier this week only served as fuel for the movement, bringing thousands down to Wall Street Thursday in an effort to paralyse the financial district and surround the stock exchange.

By 6:30pm, the headcount at Foley Square and surrounding streets was upwards of 10,000. Videos of the crowd streaming towards the square captured the degree of police surveillance around a crowd that chanted repeatedly, “This is what non-violence looks like” – a convoy of over 50 unmarked police vehicles halted the line of protestors, while fully armed riot police crawled alongside the march from lower Manhattan all the way to Foley Square.

“Many people have criticised the movement for its lack of leadership and absence of concrete demands, but Nov. 17 is a day of celebration and organised, dignified rage,” a member of Occupy Wall Street told IPS.

Already over 1,000 cities have held or continue to hold protests. Even compared to the rapid-fire actions of February 2003, which generated protests in 600 cities on the eve of the U.S. invasion of Iraq, the occupy movement has grown at an astounding rate.

John Cavanagh, former director of the Washington-based Institute for Policy Studies, told reporters Wednesday, “Inequality is as obscene as racism, sexism and homophobia and is destroying our economy. We in the U.S. know how to reverse this because we’ve done it before and we must do it again.”

Addressing an assembly at the People’s University in Washington Square Park Wednesday, the internationally acclaimed author Arundhati Roy told the occupiers, “What you have achieved since 17 September, when the Occupy movement began in the United States, is to introduce a new imagination, a new political language into the heart of empire; you have reintroduced the right to dream into a system that tried to turn everybody into zombies mesmerised into equating mindless consumerism with happiness and fulfillment.”

“As a writer, let me tell you, this is an immense achievement. I cannot thank you enough,” she added.

*Judith Scherr contributed to this report from Oakland, California.