At the Nexus of Agrofuels, Land Grabs and Hunger – Part 2 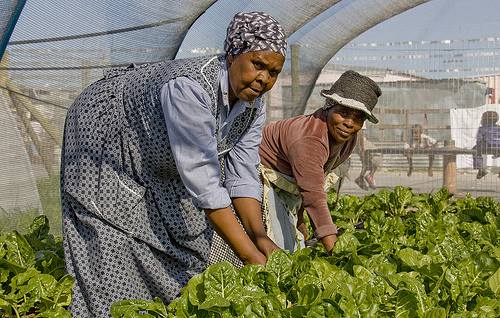 Philippi residents grow organic produce for sale to upmarket restaurants in Cape Town as well as for their own table. Credit: Kristin Palitza/IPS

WASHINGTON, Dec 7 2011 (IPS) - The forests in Africa absorb over 1.2 billion tonnes of carbon annually. With these diverse and natural forests, grasslands and prairie lands disappearing under investment schemes and the development of monoculture plantations for supposed “green” energy alternatives like agrofuels, not much else remains to absorb the shocks of hunger and climate change.

“Whether they are for energy or for exports on global markets, monocropping schemes are really testing the limits of the ecosystems,” Olivier De Schutter, the U.N.’s special rapporteur on the right to food, told IPS. “They are thirsty in water, fail to regenerate the soils and often result in an overuse of pesticides because the natural defences of nature (thanks to the diversity of plants) are missing.”

“Raising food production 70 percent by 2050 is a figure habitually wheeled out,” he added.

“Fertiliser and pesticide-driven yield increases, coupled with the ploughing up of rainforests and other remaining carbon sinks, could just about squeeze the extra tonnage of food out of the earth before the self-sustaining capacities of ecosystems are fully saturated.”

Any approach of this nature is a race against time that will eventually be lost, and through which we will only accelerate the onset of climate change and its potential to devastate harvests,” he said.

In a report to the U.N. Human Rights Council back in 2010, De Schutter presented comprehensive data on the need for agroecology: traditional practices that enhance soil productivity and use beneficial trees, plants, animals and insects to ward off pests rather than relying on fertiliser.

“To date, agroecological projects have shown an average crop yield increase of 80 percent in 57 developing countries, with an average increase of 116 percent for all African projects,” De Schutter said. “Recent projects conducted in 20 African countries demonstrated a doubling of crop yields over a period of three to 10 years.”

“The tragedy of rushing headlong into a second ‘green revolution’, where industrial solutions are sought on a global scale, is that other solutions are literally right within our grasp,” he told IPS.

Very little capital would be required to promote agroecological practices, but the land grab in Africa, fueled by the rush for carbon reducing alternatives, has been coupled with blanket tax holidays for the multinationals buying up the continents’ land, effectively robbing many impoverished states of desperately needed domestic revenues that could be invested in local development schemes, critics say.

For example, the U.S.-based Oakland Institute found that the government of Mozambique is offering generous fiscal incentives to a firm called EmVest Asset Management, which is on the verge of swallowing 2,000 hectares of the country’s land for crop and livestock production.

The company’s exemption from income tax obligations between 2010 and 2015 represents a loss of public revenue amounting to a million dollars.

In a similar project, the company AgriSol negotiated tax breaks with the government of Tanzania for income earned on a 325,000 hectare plot, for which the agro-giant will likely net an annual profit of 275 million dollars. This sum surpasses the Tanzanian ministry of agriculture’s total yearly budget.

Henry Saragih, the general coordinator of the international peasants’ network La Via Campesina, which represents 200 million peasants and farmers worldwide, told IPS, “If we look back to the past, we see that one of the primary objectives of colonisation was to find and absorb from the colony all the resources needed by the coloniser. Oil, gas and mining came later. It was first land and food that was stolen.”

“Not just in Africa, but also in Indonesia, Malaysia, Honduras and numerous other countries the peasantry and indigenous and local communities are fighting to take back their land and territory,” he added.

Comparing the cost of land in Africa with its developed counterparts paints a picture of colonial acquisition. While the U.S. leases its land for 16,000 dollars per hectare for just one year, Ethiopia leased 10,000 hectares of land to the Saudi Star for free over a 60- year period, while Mali leased 100,000 hectares for free over a similar time period.

“Our research found that actors like the World Bank Group (WBG) and the U.S. Agency for International Development (USAID) not only push governments to privatise land but also work to change local legal systems of land tenure,” Frederic Mousseau, the policy director of the Oakland Institute, told IPS.

In numerous African countries, WBG officials work closely with national governments to quietly overturn the few flimsy laws that peasants and farmers had hitherto held as the only protection of their basic land rights.

Back in 2007, Susan Hume, the country manager for Mozambique, urged the government to reconsider its property rights, speed up VAT refunds for private firms and adopt a “guillotine” on land licenses, adding, “The World Bank would be pleased to assist the government in this process, through Technical Assistance and with help from the Foreign Investment Advisory Service.”

“By publishing this research on the relationship between the land grab, climate change, energy policies and investment practices, we’re trying to break the “silo” approach to development that looks at each issue independently of the other,” Mousseau told IPS.

“We feel it’s important to challenge the development paradigm that is ‘marketing’ and privatising land and we hope this research promotes the return to communally owned land,” he said.

Activists echoing these sentiments have teamed up with grassroots networks and coalitions in Durban to draw together these ideas under the banner of ecosocialism, a nascent global movement that is agitating for economic transformation with earth rights as a central guiding principle.

Joel Kovel, co-founder of the U.S.-based Ecosocialist Horizons, told a convergence of hundreds of peasants and farm workers in Durban last week that capitalism began with the enclosure of the commons.

“Examples like the Occupy Wall Street movement in the U.S. is people’s attempt to reclaim these commons and reassert control over the means of production,” Kovel told IPS. “Capitalism cannot be reformed, nor can it be voted out of power. It can only be defeated by the creation and proliferation of autonomous zones of eco- socialist transformation and production, which have earth rights at their centre.”

“This is what we need to build now. This is what we’re building in the U.S. and South Africa, while the U.N. gambles away our collective future,” he added.

“People on the streets of South Africa are calling the U.N. talks ‘genocidal’,” Quincy Saul, author of “Reflections of Crisis: The Great Depression in the 21st Century”, told IPS.

Quoting Archbishop Desmond Tutu, Saul added, “By delaying a binding agreement on global warming to 2020, the U.N. is effectively condemning 100 million Africans to death by the end of the century.”

“To the majority of people on this continent, the U.N. is no different from Wall Street: it is the one percent,” he said.

*This is the second of a two-part series on biofuels, industrialised agriculture and hunger.