BANGLADESH: Lighting up on Solar Power 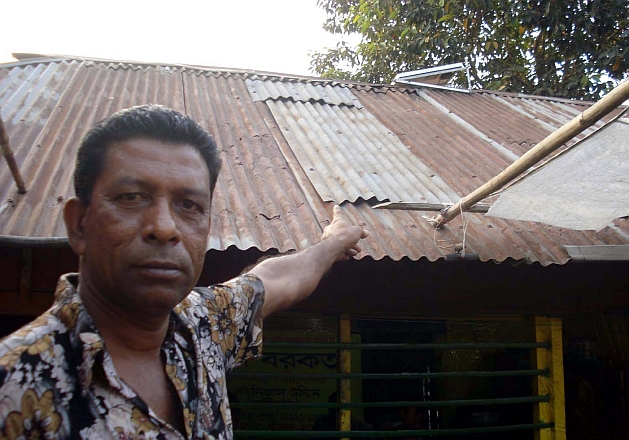 DHAKA, Dec 28 2011 (IPS) - The sun never shone brighter on rural Bangladesh with low power solar systems transforming the lives of tens of millions of marginalised rural people who are unconnected to the national grid.

Nizamuddin Sheikh, 52, who runs a small eatery in Foilerhat market in Bagerhat district, thinks that the Bangladeshi Taka 1,900 (24 dollars) he paid for a 20 watt solar set, that includes solar panels, battery, regulator and a set of compact fluorescent lamps (CFL) and LED lights, is the best investment he ever made.

“Before I bought the set from GS (Grameen Shakthi, a sister concern of Grameen Bank) my restaurant was kept open only during the daytime, but now I have extended my business well into the evenings,” Nizamuddin told IPS. “My income has doubled.”

Nizamuddin has to repay the rest of the cost of the solar home system (SHS) over the next 36 months at five dollars per month, which, he says, is no burden.

“Once we demonstrate the benefits of SHS, people respond with tremendous interest,” said Habibur Rahman, GS regional manager in Bagerhat. “And then we offer easy and affordable monthly installment facilities.”

There are various packages on offer suited to different income groups of people in the rural areas. The very poor can own an SHS, paying as low as ten percent of the total cost with the rest payable in 36 equal installments.

Typically, people from the poorer sections opt for an SHS set that costs 124 dollars and capable of generating about 10 watts of electricity to light a five watt CFL for about three hours.

Better off people buy more powerful systems, paying 35 percent of the total cost of the SHS in advance and the balance over a 12-month period. Costs vary with energy output, with the most expensive model costing 925 dollars and providing 135 watts of uninterrupted power for four hours.

Acting managing director of GS, Abser Kamal, told IPS, “SHS units are in demand due to many advantages, but especially because it is far cheaper than conventional fuels like kerosene and diesel and has no maintenance expenses.”

“In the villages solar power provides extended working hours for students, shopkeepers and housewives. Now they can do things like conveniently charge mobile phones – which have already been changing lives,” Kamal said.

“Without solar power many villagers would probably have had to wait years to get electricity from the national grid,” he said. “Solar is transforming their lives – this is quick social and economical development.”

Only 41 percent of Bangladesh’s 142 million people have access to electricity from the sluggish national grid.

GS, a pioneer in promoting ‘green energy’, started out in 1996 as a lone player and today is the largest distributor of SHS – over 700,000 units out of a total of about 1.1 million in the country – contributing to the daily generation of about 60 Mw of solar power.

So successful was the initial programme of promoting SHS that the private sector sold 50,000 sets in about five years – two years ahead of the target of 2008.

In 2008, the government set a target of five percent of total energy from renewable sources and 10 percent by 2020.

Current power generation from some 81 power plants amounts to 6,700 Mw, with 95 percent of it coming from burning fossil fuels like coal, furnace oil, gas and diesel. Hydroelectric power accounts for another 3.3 percent

Bangladesh’s energy minister Muhammad Enamul Huq told IPS, “We want to promote solar system in every corner of the country and so we are giving huge incentives to the private sector to make solar affordable.”

Government incentives for companies setting up solar plants include a 15-year tax holiday and exemption from paying import duty on equipment.

Foreign investors get exemptions on royalties, technical knowhow, technical assistance fees and facilities for their repatriation of profits. Foreigners working in solar energy projects need pay no income tax for the first three years of their stay in this country.

Last year the government also made it mandatory for all newly constructed domestic and commercial buildings to have solar systems installed on rooftops.

“Today we are helping to change the lives of 7,000 rural people every day through solar technology,” said Islam Sharif, chief of the state-owned financier, Infrastructure Development Company Limited (IDCOL), which funds 90 percent of Bangladesh’s 1.1 million SHS – mostly in partnership with GS, but also with other companies and NGOs.

Speaking to IPS, Sharif said, “Through our 29 partners we are now helping to add 24 Mw of solar power in Bangladesh every year.”

M. A. Gofran, a leading Bangladeshi expert on renewable energy told IPS: “In ten years from now we want to celebrate the 50 years of independence of the nation by seeing all our villages using renewable energy.”