WASHINGTON, Dec 28 2011 (IPS) - Veteran observers of U.S.-Iran relations know better than to be optimistic about the chances for reconciliation between the two countries. It has long been the pattern – indeed the curse – that when one side was ready to engage, the other was not. 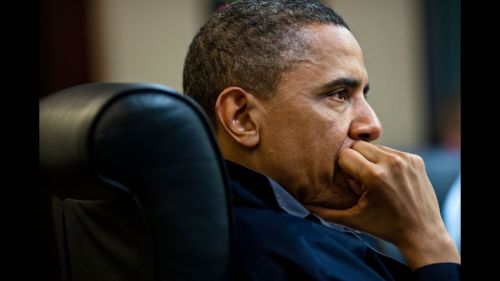 Negotiations might have continued if not for other pressures on Obama, Parsi writes. Credit: Official White House Photo by Pete Souza

But even the most jaundiced of Iran experts succumbed to a smidgeon of hope in 2008 that the election of Barack Hussein Obama would shatter a three-decade-old stalemate.

As of this writing, however, the curse holds. The United States and Iran remain on a collision course. Relations are, if anything, worse than they were under the George W. Bush administration; the world appears to be faced with a lose-lose situation: an Iran with nuclear weapons, or a new Middle East war with devastating consequences for the region and the world economy.

According to Trita Parsi, author of a new book on U.S. diplomacy toward Iran, Obama – the man with the Muslim middle name and a last name that means “He is with us” in Farsi – tried hard but not hard or long enough. Iran, meanwhile, bungled a genuine offer of engagement.

Parsi has done a great service by writing the first book on how the Obama administration and Iran missed yet another opportunity for reconciliation. In “A Single Role of the Dice: Obama’s Diplomacy with Iran”, Parsi explains what went wrong on both sides as well the events and third parties that helped insure that diplomacy would be given only a minimal chance to succeed.

Parsi is well qualified to analyse the sad course of U.S.-Iran relations. He is already the author of an acclaimed 2007 book – “Treacherous Alliance: The Secret Dealings of Iran, Israel and the United States” – that examined Israel’s changing view of the Islamic Republic and influence over U.S. policy.

His new book will appeal to specialists and the general public. While his main arguments are familiar to those who follow the issues closely, there is new detail about the formation of Obama’s policy, Israeli intervention in U.S. decision-making, as well as abortive efforts by Turkey and Brazil to resurrect a confidence-building measure that turned out to be Obama’s sole diplomatic gambit.

The fraud-tainted Iranian presidential elections of 2009 were a major factor in reducing maneuvering room in both Tehran and Washington. Parsi describes how “Iran’s decision-making process, which was already taxing and slow, reached a state of near-paralysis” after the June vote.

Domestic opposition to Iranian President Mahmoud Ahmadinejad from both his left and his right led Supreme Leader Ayatollah Ali Khamenei to rescind support in the fall of 2009 for a U.S.-proposed confidence-building measure that would have sent out large quantities of Iran’s partially enriched uranium in return for fuel for a Tehran reactor that makes medical isotopes.

Parsi, citing a leaked State Department cable, reveals that Israeli Prime Minister Benjamin Netanyahu, who took office shortly after Obama, told a U.S. Congressional delegation led by Sen. Jon Kyl in April 2009 that engagement with Iran should be tried for only four to 12 weeks “with the explicit objective of putting an end to the Iranian nuclear program – a near impossible task.”

Meanwhile, the U.S. Congress – actively lobbied by the American Israel Public Affairs Committee – began pushing for new sanctions before Obama had had a chance to make a serious overture to Tehran.

Netanyahu also sought to leverage Obama’s main priority in the Middle East – resolving the Israeli-Palestinian dispute – to cut short U.S. engagement with Iran. As Parsi writes, “the Netanyahu government declared that it would not move on peace talks with the Palestinians until it first saw progress in America’s efforts to stop Iran’s nuclear program and limited Tehran’s rising influence in the region.”

As of this writing, there has been no progress on the Arab-Israeli front and Iran’s nuclear programme continues.

Iran’s harsh crackdown on pro-democracy demonstrators after the 2009 presidential elections led many who had previously supported engagement to embrace sanctions. France, under President Nicolas Sarkozy, was particularly hawkish.

In September 2009, after the U.S., France and Britain revealed that Iran had been secretly building a uranium enrichment site in a mountain near Qom, Sarkozy declared that if there was not an “in- depth change by the Iranian leaders” by December, tough new sanctions should be imposed, Parsi writes.

Obama had already promised Netanyahu that the end of December would be the deadline for progress; once Iran began to retreat and haggle over the fuel swap proposal, Obama endorsed a series of ever more punitive sanctions. In response, Iran has hardened its position.

Among the major contributions of Parsi’s book is an entire chapter devoted to the efforts by Turkey and Brazil to resurrect the fuel swap, which culminated in the so-called Tehran Declaration of May 17, 2010.

Parsi quotes at length from an Apr. 20, 2010 letter from Obama to Brazilian President Luiz Inacio Lula da Silva that guided Lula’s efforts along with those of Turkish Prime Minister Recep Tayyip Erdogan. The letter repeated U.S. demands for Iran to send out 1,200 kilogrammes of low-enriched uranium (LEU) and said that the United States would accept Turkey holding the material in “escrow” until fuel for the Tehran reactor could be delivered to Iran a year later.

But when Iran agreed to the deal a month later, the Obama administration was both surprised and annoyed. Within the administration, Parsi discloses, then deputy assistant secretary of State John Limbert, a former hostage in Iran, led a minority that advocated exploring the agreement.

“The argument for patience did not have any takers at the top,” Parsi writes.

Iran had by then accumulated a larger stockpile of LEU and the United States had just succeeded in getting Chinese and Russian buy-in for a tough new sanctions resolution. According to Parsi, Obama was afraid that if he did not go forward, he would be seen as indecisive and weak. The vote at the U.N. Security Council proceeded but Turkey and Brazil voted “no”. The U.S. followed up with more sanctions of its own.

Two subsequent meetings of Iran and the so-called P 5 + 1 – the five permanent members of the U.N. Security Council plus Germany – failed to narrow differences; they were characterised by empty posturing by the Iranians, who also refused to talk bilaterally with the United States.

As Obama’s first term comes to an end, Iran is feeling the pain of sanctions but continuing to enrich uranium to ever higher percentages of the isotope needed for nuclear weapons. U.S. influence in the region as a whole is on the wane as a result of political upheaval in the Arab world. Iran is also losing clout as Arabs search for new models of governance and Iran is tainted by its support of Syria’s brutal dictatorship.

Hawks in Washington and Jerusalem are calling for a U.S. attack on Iran this year, minimising the consequences and the misery wrought by U.S. regime change in Iraq and the ambivalent results of the war in Afghanistan.

Tehran, meanwhile, is consumed by bitter political rivalry within the conservative elite who are competing for the diminishing spoils of the state and blaming each other for their country’s predicament. Faced with a possible European oil embargo, Iran is threatening to close the Strait of Hormuz, choking off world oil supplies and possibly triggering a conflict with the United States.

Parsi criticises the Obama administration for essentially giving up on diplomacy after its initial proposal failed, conflating a confidence-building measure with “the endgame” of preventing Iran from building nuclear weapons.

The United States, he asserts, should also have sought to engage Iran on a broader agenda, including issues like Afghanistan where the two sides might more easily find common ground. But he acknowledges that Iran failed, too, and says that its leaders are likely to realise in hindsight that they blew a major opportunity to escape from growing international isolation.

Parsi predicts that the stalemate will persist “for some time” no matter who wins U.S. presidential elections in 2012. One can only hope that war can be avoided, giving time for more creative and flexible policies to emerge in Washington, Jerusalem and Tehran.