PORT OF SPAIN, Trinidad, Dec 8 2011 (IPS) - Even the rains seemed to have joined forces against Cuban President Raul Castro. 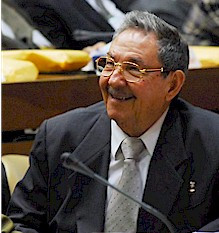 As his Cubana jet landed at the Piarco International Airport at the start of his official visit coinciding with the fourth Cuban-Caribbean Community (CARICOM) summit, the heavens burst open, forcing Castro and local dignitaries, including President George Maxwell Richards and Prime Minister Kamla Persad Bissessar, to seek shelter.

But Castro, the 78-year-old general, took it in stride, insisting on inspecting the guard of honour mounted by the local army. As he made his way to the capital, however, his mind may have been on the latest attempt by his old foe in the north to prevent him from meeting with regional leaders for their summit held every three years.

The Hilton Trinidad hotel had been named as the venue, but that became impossible after the hotel’s general manager Ali Khan read a statement from Hilton Worldwide, indicating that it is subject to U.S. law, which restricts certain activities as a result of the trade embargo with Cuba.

“The U.S./Cuban assets control regulations administered by the Office of Foreign Assets Control (OFAC) at the U.S. Department of the Treasury generally prohibits U.S.-based companies from providing any services that benefit the Cuban government unless specifically licensed. Violations are subject to significant civil and criminal penalties.

“While we have worked with the appropriate governmental agencies in the U.S. and Trinidad and Tobago to secure a licence, we have been informed that one will not be granted,” the statement read.

Acting public affairs officer Alexander McLaren at the U.S. embassy told the local media that to his understanding, the licence is pending and the only reason the Hilton did not get it is because they applied late.

He said the application was dated Nov. 23 and the Office of Foreign Assets Control – a department of the U.S. Treasury – received the application on Nov. 28 and as a result hosting the Cubans at the hotel “will likely take time to resolve”.

Foreign Affairs Minister Suruj Rambachan said, “The U.S., I suppose, are within their rights to carry out what they have done in terms of the Helms-Burton law, having their tentacles stretching out here in Trinidad and Tobago as well as the Caribbean.”

The union representing workers at the hotel was even more critical, pointing out that the “hotel is owned 100 percent by nationals of Trinidad and Tobago”

General Secretary of the Communications Workers Union (CWU) John Julian told reporters that the facility had recently undergone a multi-million-dollar rehabilitation and “Hilton International did not put any money in it.

“For it to come now and say that you need to get permission we find that to be insultive to the people of Trinidad and Tobago and CARICOM,” he said.

The Trinidad Express newspaper in an editorial Thursday said it regarded the U.S. move as a “slap in the face” for the host country.

“That the Hilton Trinidad, owned by the State, was effectively prohibited by dictate under U.S. law from holding a conference to be attended by Cuban President Raul Castro feels like a slap in the face of Trinidad and Tobago and a contemptuous overriding of national sovereignty,” it said.

But as the summit got underway here on Thursday, Castro must have been heartened by the renewed call from the CARICOM leaders for Washington to end its decades-old trade and economic embargo against the only Communist state in the Caribbean.

CARICOM Chairman and St. Kitts and Nevis Prime Minister Dr. Denzil Douglas said that the regional grouping was using the occasion to reiterate its call for “the United States to heed the overwhelming call of the members of the United Nations to lift with immediate effect the unjust economic, commercial and financial embargo imposed against the Republic of Cuba”.

CARICOM Secretary General Irwin La Rocque said that CARICOM has maintained its unwavering support for Cuba in various international fora, adding “to us in CARICOM, this action demonstrates our belief in the concept one of Caribbean indivisible”.

Washington imposed the embargo on Havana Cuba in October 1960 after Cuba nationalised the properties of United States citizens and corporations soon after Fidel Castro came to power.

Castro told the ceremony that Havana would also “never forget” the support of the Caribbean in seeking to end the embargo “imposed against our noble people by the United States government more than five decades ago.

He said it is an embargo that “remains essentially unchanged” and that the measures outlined by the Barack Obama administration “have not gone beyond a partial relaxation of the restrictions limiting remittances and travel to the island of Cuban citizens living in the United States.

“The expectations of the so-called 2009 Summit of the Americas held in this city have failed to rise above the rhetoric, even less now when we are in a year where elections will be held.”

But he said that Latin America and the Caribbean were moving ahead towards “new, better forms of integration convinced that our unity in the defence of the rights of peoples in this region that this is inherent to the process agenda of the forefathers of our independence.”

He said the establishment of the Community of Latin American and Caribbean States (CELAC), which was launched in Venezuela last weekend, “shows that we are advancing on the right track”.

Persad Bissessar said that the establishment of CELAC to augment the other organisations promoting integration within Latin America offers “tremendous opportunities for renewed cooperation among developing countries of the hemisphere, especially at a time when traditional markets and sources of investment in the north are experiencing severe challenges.

“We owe it to ourselves and succeeding generations to harness the abundance of human and natural resources, coupled with the technological advances being achieved by countries like Brazil to ensure that these resources are used in a sustainable manner to achieve the economic development of our countries and meet the Millennium Development Goals (MDGs),” she added.