DURBAN, South Africa, Dec 6 2011 (IPS) - The goal of a comprehensive and binding agreement may be beyond the reach of the 17th United Nations climate change negotiations, says the organisation’s secretary-general Ban Ki-moon. 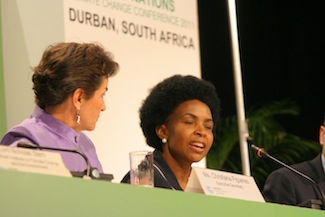 Ban was speaking at the official opening of the high-level talks on climate change in Durban, South Africa, on Tuesday.

He cautioned delegates not to set their hopes too high. “We must be realistic about expectations for a break through in Durban,” Ban said. The reasons for more cautious expectations were well known, he added, such as the global financial crisis, which has led to fiscal austerity with countries prioritising national budgets before international needs.

“But none of these uncertainties should prevent us from making real progress here in Durban,” Ban urged, noting that serious proposals and persistence were needed to proceed. “It’s like riding a bicycle. As long as you move forward you keep your momentum,” he explained.

“The future of our planet is at stake,” Ban warned. “Time is not on our side. We are reaching the point of no return and must walk away from the abyss.”

South African President Jacob Zuma stressed that climate change was a global challenge that required worldwide solutions. He said it was critical to find common ground to reach an agreement.

“Different positions still prevail on different points,” he concluded after more than a week of often staggering negotiations, reminding delegates “we all agreed that the earth is in danger and that we must do something about it.”

“We need to show the world that parties are willing to solve problems in a practical manner and forego national interests, at times, for the interests of humanity, no matter how difficult this may be,” Zuma added. He demanded that delegations rebuild trust in each other.

The South African president said that the 17th Conference of Parties is still a decisive moment for the multilateral system, which has evolved over many years under the United Nations Framework Convention on Climate Change (UNFCCC) and the Kyoto Protocol.

“The first period of the Kyoto Protocol is about to come to an end. The question left unanswered is the second commitment period. It is clear that if this question is not resolved, the outcome on other matters will become extremely difficult,” Zuma said.

Industrialised nations needed to adopt a second period of the Kyoto Protocol, while developing countries needed to agree on voluntary pledges. “All parties will have to collectively do more, with common but differentiated responsibility,” explained Zuma.

With twelve heads of states and 130 ministers having arrived at the summit on Tuesday, the last three days of the climate change summit are expected to bring about important, far-reaching political decisions. “For the first week, negotiators have been hard at work, but the ministers will have to take leadership,” said Maite Nkoana-Mashabane, South Africa’s Minister of International Relations and Cooperation and the summit’s chair.

She noted that it was important for political leaders to consider the memorandums written by thousands of concerned citizens, which were handed to the conference leadership throughout the summit: “They expect leadership from us. We have a responsibility not to disappoint them.”

Christiana Figueres, the executive secretary of the UNFCCC, said “good progress” had been achieved on a number of issues, which included headway on financial support to developing countries, particularly regarding adaptation projects, the Green Climate Fund and deforestation. She was also confident that the Durban conference would fully operationalise the Cancun agreements before it ended on Dec 9.

However, Figueres stressed that a number of issues still needed progress and further guidance on a ministerial level. “The time has come to address the thorny political issues before us, such as long-term funding, a second Kyoto Protocol and the framework under the Convention,” she said.

From today on, it was up to the government ministers to develop solutions to the issues at hand. “They need to ensure there is clarity on contours of a second Kyoto Protocol and that gaps are ruled out. We also need clarity on how to avoid an ambition gap and on how funds will be scaled up from now until 2020.”

Connie Hedegaard, commissioner for climate action at the European Commission who represented the European Union (EU) spoke about the need for a new, comprehensive, legally binding international framework. “Only then can we bring the actions to the scale we need, with the speed we need,” she noted. “We would like the D in Durban to be a D for decisions and a D for delivery.”

Hedegaard acknowledged that not all developing countries were ready to commit to legally binding agreements immediately. The EU had therefore made the “significant offer” of a roadmap, which suggests emerging economies come on board by 2020 at the latest.

“All major economies need to commit, of course respecting common but differentiated responsibilities. If they will not commit to an agreement in the foreseeable future, they take on an unbearable responsibility,” she warned.

Speaking on behalf of the African Union, Ethiopian Prime Minister Meles Zenawi urged the EU not to abandon the Kyoto Protocol, no matter what commitments other countries were prepared to make: “The Kyoto Protocol is too important to be sacrificed for tactical advantages on negotiating table.”

Another “top priority” should be ensuring that the agreements reached at the previous climate talks in Cancun, Mexico, will be implemented, Zenawi added, because, for the African continent, funding for climate change mitigation and adaptation programmes were of “utmost importance”. “We are deeply disappointed that fast-track funding promised to us in Copenhagen has largely failed to materialise,” he complained.

Argentina’s Vice-minister of Foreign Affairs Alberto Pedro D’Alotto agreed with Zenawi, while speaking on behalf of the Group of 77 plus China, a bloc of 131 developing countries. He said he was seriously concerned about the “key lack of financial resources” made available to developing countries.

Nauru’s President Sprent Dabwido, who spoke on behalf of the small pacific island states, brought home the urgency of tangible decisions being made at this year’s summit. “For us, climate change is a matter of life and death,” he said. “Unless action is taken, a large part of my region could be rendered uninhabitable within the lifetime of my grandchildren. The time for small incremental steps ended long ago. Great strides must be made.”

The high-level talks will be concluded on Dec 9.