BERLIN, Dec 8 2011 (IPS) - According to official figures, the European Union member countries have successfully reduced their emissions of greenhouse gases (GHG), especially of carbon dioxide (CO2), by more than 15 percent since 1990, thus more than fulfilling their commitments under the Kyoto protocol. 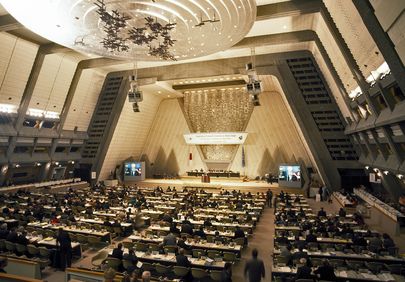 However, these figures only consider the emissions from industrial and other domestic economic activities, ignoring considerations such as the EU’s consumption of imports from pollution-heavy, rising economies like the People’s Republic of China, South Africa, India, and Brazil.

If international trade and local consumption of imported goods were accounted for, the CO2 emissions in Germany and France would have increased by more than 20 percent during the last 20 years, according to two new studies.

Similar estimations are true for all the major industrialised countries.

In order to calculate the real impact of ‘carbon leakage’ – increased emissions of CO2 in one country as a direct result of decreased emissions in another – scientists are now suggesting using a country’s ‘carbon footprint’ as the most reliable indicator.

“The carbon footprint as a basis for a country’s climate policy obligations includes all emissions for which the consumers in that country are responsible,” Gabriel Felbermayr, professor of economics at the university of Munich and author of a recent study on carbon footprints for the Leibniz Institute for Economic Research (IFO, in German), told IPS.

“If a country engages in international trade, then its carbon footprint (changes according) to the ‘CO2 content’ of its trade,” Felbermayr told IPS.

The ‘CO2 content of a good’ measures total emissions resulting from the production of a commodity. It takes account not only of the direct emissions generated in each sector but also emissions in upstream stages of production.

The Kyoto protocol established that industrialised countries should reduce GHG emissions by more than five percent from their 1990 levels.

Officially, Germany has complied with this stipulation, cutting GHG emissions by 21 percent since 1990. France also claims to have reduced emissions by almost 11 percent over the last two decades.

But Felbermayr and other scientists evaluating the impact of consumption of imported goods in both countries call such figures “fallacious.”

“Industrialised countries document CO2 savings but in reality emissions have only been shifted abroad, leaving total world emissions about the same,” Felbermayr, whose study analysed the CO2 emissions and carbon footprints of 40 countries from 2005-2007, explained.

“Up to now, climate agreements – particularly the Kyoto protocol – measured a country’s contribution to global climate change by its CO2 emissions,” Felbermayr added.

However, any reductions recorded under this system of measurement were likely illusory.

“From 2002 to 2007 France reported stagnant or slightly decreasing CO2 emissions. In contrast, its per capita footprint increased continuously over the same period.”

According to traditional evaluations of CO2 emissions, China is now considered the world’s worst polluter, just ahead of the U.S. But using the carbon footprint indicator, Felbermayr concludes that the U.S. continues to be the largest carbon emitter.

The Eco2climat of France estimates a 25 percent increase in GHG emissions between 1990 and 2010, instead of the 10.3 percent reduction touted by the French government.

“Our indicator estimates the actual emissions which correspond to the standard of living in France,” Jean-Marc Jancovici, director and co-founder of Carbone 4, told IPS.

“Official figures suggest that France is on the right track to reducing emissions without putting any constraint upon our consumption,” Jancovici added. “We at Carbone 4 have proved that such a claim is wrong.”

Felbermayr estimates that in Germany, the discrepancy between footprint and emissions has also grown steadily.

Such growth corresponds to emissions caused by increasing industrial production in strong emerging economies, especially China and South Africa. According to Felbermayr’s study, China exports more than 27 percent of its emissions, followed by South Africa (20.7 percent) and the Czech Republic (19.4)

By the same token, the largest net importers of emissions are Switzerland (58.4 percent), Sweden (36 percent), Norway (33 percent), the Netherlands (32 percent) and France (26 percent).

The two studies echo warnings issued repeatedly by the Organisation of Economic Cooperation and Development (OECD), first in 2005 and then again in 2009.

At the time of publication this study revealed, “Consumption-based CO2 emissions of (the 30 most industrialised) countries were, on average, about 16 percent higher in 2005 than conventional measures of production-based emissions suggest.”

By 2009, the situation had worsened, and the OECD insisted that the “relocation process (of industrial activities) and increased ‘carbon trade’ appear to be contrary to the GHG reductions envisioned in international agreements.”

But these warnings went unheard, leading scientists like Felbermayr now to call for using carbon footprints, rather than national estimates of GHG emissions, as an indicator for international reduction agreements.

“To prevent carbon leakage, a future climate agreement should be oriented on the carbon footprint instead of domestic emissions,” he said.

“The carbon footprint can be very precisely targeted by the state levying a consumer tax on the CO2 content of a good,” he said.

In addition, “the use of the carbon footprint could also increase the willingness of China and India to participate in international climate change agreements,” such as the agreement currently being discussed in Durban, South Africa.