DURBAN, South Africa, Dec 5 2011 (IPS) - Talata Nsor, a 54-year-old woman from Bolgatanga community in Northern Ghana, has been weaving the cultural Bolga baskets, which are named after her community, her entire life. 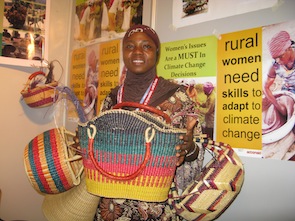 It has been a successful enterprise for her, and she has even managed to put her children through school with proceeds from her sales.

However, she is concerned that soon her community may no longer be able to continue making the baskets, which are famous in the entire West African region, with a market in Europe and America.

This is because the raw material used to make the baskets, commonly known as elephant grass or Veta vera as it is known scientifically, is becoming extinct due to what Nsor refers to as changing climatic conditions.

“Just 10 years ago, I would walk to any nearby wetland area within Northern Ghana and harvest the grass free of charge. But today, I have to walk very far, or travel to Kumasi, about 400 kilometres away, in order to buy the raw material,” said Nsor.

The elephant grass can only grow in wetlands. But according to experts from the area, people are converting wetlands into agricultural land as a means of coping with the lack of rain and rising food insecurity.

“People prefer turning wetlands into horticultural zones because rain-fed agriculture is failing. Rain patterns are no-longer reliable, and people need to farm in places where they are assured of water for irrigation,” said Nafisatu Yussif, Programme Officer at ABANTU, an organisation that engages policies from a gender perspective in Africa.

She is one of the many women representing their communities from all over the world who have made their way to the ongoing United Nations climate change negotiations in Durban, South Africa, in order to have their voices heard.

“We are hosting different women from different walks of life,” said Samantha Hargreaves of ActionAid International, one of the conveners of the Rural Women’s Assembly running alongside the 17th Conference of Parties.

“More than 500 women in this forum are sharing experiences from different countries, suggesting the way forward, and showcasing their best practices. The outcome of the assembly will be presented to the African Group of Negotiators as a common position of women from the world’s poor countries,” said Hargreaves.

However, according to the assembly’s participants, women from poor countries have predicaments that are almost similar. 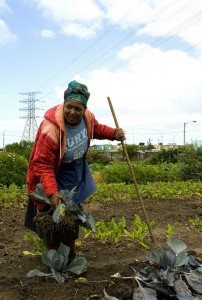 Rural women are feeling the effects of climate change in their agricultural yields. Credit Kristin Palitza/IPS

“In my country, women toil on the farms, but when it comes to harvesting, the men take the responsibility of collecting the money. I have just learnt that the situation is the same in Africa and other Asian countries,” said María Estela Jocón González, who is representing rural women from three rural regions in Guatemala.

The western, southern and northern regions of Guatemala are areas prone to floods, a situation which has worsened in the recent past, González said.

“When the floods come, the water wells get soaked up with dirty flooding water. Yet according to our culture, it is the sole responsibility of a woman to ensure that the family has enough safe water for drinking and other domestic uses,” she told IPS.

She is calling for the international community meeting in Durban to ensure systems are put in place to keep in check the increasing floods.

“I want to hear of commitments for countries to reduce emissions of gasses that cause global warming. It is good to think about development, but development without a sound environment is useless,” she said.

While there is flooding in Guatemala, southern Senegal is experiencing a lack of rainfall. Faty Khody from Kaulak, a rural community found in the southern part of Senegal, told IPS that rainfall in the area has dropped from an average of 900 millimetres in 2001, to between 300 and 400 millimetres currently.

“We used to grow vegetables and sell them in the local market. But currently, this is not possible unless it is done through irrigation,” said Khody, who works as a promotional officer for Interpench, a community-based organisation that brings together over 7,700 women from rural Senegal.

“The rain patterns have changed, droughts have become extreme, and when it rains, it results in floods, which often cause suffering to the rural people, especially women and children.”

With support from the non-governmental organisation Horizon 3000, Interpench has started a project called “One woman, one fruit tree” as a way of adapting to climate change.

“We say one tree because it is the first step. The seedling for the one tree is given out free of charge, and it is named after whoever plants it as a reminder. However, it is supposed to be a motivation for women to participate largely in not only the planting of trees, but planting fruit-producing trees,” Khody said.

“We are hoping that the deliberations at COP 17 will come up with ideas that will support such women- driven climate change adaptation initiatives,” said Hargreaves.

However, she insists that for such projects to succeed, they must be built on indigenous knowledge systems.

“The African Group of Negotiators must not succumb to the pressure from the developed countries at COP 17,” she said.

Similar views were shares by Elizabeth Kakukuru, the Programme Officer for the Gender Unit at the Southern African Development Community.

“Most negotiations have always been done in boardrooms without involving the person on the ground. Yet the recommendations made are supposed to be implemented by a woman who lives in a rural area. Time has come for the affected parties to be involved directly in such important negotiations,” she said.

With regards to the use of technology transfer for climate change adaptation, Kakukuru observed that all projects must be appropriate, and should be developed in consultation with indigenous communities.