CAIRO, Dec 17 2011 (IPS) - Activists across the Middle East are reporting a mysterious toxin, possibly a banned nerve agent, in the thick clouds of tear gas used by security forces to suppress anti-government protests in recent months. 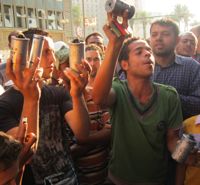 “I felt weak and dizzy for several days, and my hands wouldn’t stop shaking,” recalls Mahmoud Hassan, an Egyptian marketing executive who was hospitalised last month after inhaling tear gas during a protest against military rule in Cairo. The gas used against protesters was many times stronger than that used by security forces during the 18-day uprising that toppled Egyptian dictator Hosni Mubarak in February, he insists.

“This wasn’t tear gas, it was something else,” says Hassan. “It burned the skin and lungs, and we all fell to the ground shaking uncontrollably.”

A similar gas is suspected of causing the deaths of at least eight civilians in Bahrain since February. In Yemen, doctors reported that anti-government protesters exposed to what appeared to be tear gas arrived at field hospitals paralysed, unconscious, or in convulsions. Routine treatments for tear gas exposure had no effect.

“We are seeing symptoms in the patient’s nerves, not in their respiratory systems. I’m 90 percent sure it’s nerve gas and not tear gas that was used,” Dr. Sami Zaid, a physician at the Science and Technology Hospital in Sanaa, said in March.

Conventional tear gas is a white powder composed of ortho-chlorobenzylidene-malononitrile, commonly known as CS. The chemical was developed for crowd control in the 1950s, proving a more powerful irritant but less toxic than the chloroacetophenone (CN) series it has largely replaced.

It is unclear whether the numerous reports of a toxic incapacitating gas involve one chemical compound or manufacturer, or many. But the observed symptoms, whether in Cairo or Sanaa, are remarkably similar: a severe burning sensation on the skin and in the lungs, nausea, paralysis, convulsions, and in some cases, death.

“We think the CTS canisters are causing the strange symptoms (reported in Egypt),” says Sherif Azer of the Egyptian Organisation for Human Rights (EOHR). “But we also found some canisters with no markings at all.”

In contrast, most of the canisters recovered in Bahrain bear the markings of U.S. firm NonLethal Technologies. Federal Laboratories, CTS, Chemring, and French security firm SAE Alsetex also supplied tear gas to the Gulf Arab state in recent years. CTS is a leading supplier of riot control agents to the Yemeni government.

Rights activists investigating claims of a toxic tear gas are exploring several theories. One of the first to emerge was that the substance used against protesters across the region was dibenzoxazepine (CR), a form of tear gas up to ten times more powerful than CS as a lachrymator. The riot control agent produces similar effects to CS, but also induces intense pain on exposed skin and membranes, which becomes more painful when flushed with water.

The highly persistent form of tear gas has been used by Israeli forces to suppress demonstrations in the Palestinian Territories. It was also used by the American military to flush out enemy combatants, but shelved from civilian use due to its carcinogenic properties.

While there are accounts of people seeing used tear gas canisters with CR markings in Egypt and Bahrain, journalists and rights activists investigating the issue have been unable to verify their claims.

“We’ve only seen canisters marked CS, although we cannot rule out that some canisters were mislabeled or tampered with to increase their potency,” says Azer.

Another commonly heard accusation is that security forces are using expired tear gas.

CS gas has a shelf life of three to five years, but activists in Bahrain and Egypt have published photos of used canisters with production dates more than ten years old. They argue that over time the chemical components in CS break down, forming dangerous byproducts.

One concern is a buildup of malononitrile in the expired canisters. When heated, the acidic powder degrades into highly toxic hydrogen cyanide gas – the same gas used with lethal effect in Nazi Germany.

According to medical sources, symptoms of cyanide poisoning include weakness, nausea, and difficulty in breathing. Higher concentrations can lead to a loss of consciousness followed by convulsions, muscle twitching and apnea. Less than a gram of cyanide is fatal to humans.

Dr. Ramez Moustafa, a neurologist at Ain Shams University in Cairo, noted many of these symptoms during his visits to field hospitals in Tahrir Square last month.

“My colleagues and I saw cases where the tear gas caused people to have convulsions and involuntary movements,” Moustafa told IPS. “Even in high concentrations, regular tear gas does not (affect the) nervous system. There were reports that some people died of seizures.”

Experts, however, dispute the possibility of lethal chemicals forming spontaneously in aging or improperly stored tear gas canisters. They argue that like medicine, CS loses its efficacy over time.

“Tear gases usually lose effectiveness and sometimes (do) not even ignite to start the smoking process when they are expired,” says Kamran Loghman, former president of Zarc International, a California-based manufacturer of non-lethal chemical sprays. “They do not turn into another chemical.”

More likely, he suggests, the observed symptoms are the result of overexposure. Since the Arab Spring, security forces have stepped up the use of tear gas to counter protesters’ growing tolerance to the chemical irritant – whether due to repeated exposure or physical means such as gas masks and goggles. Videos show riot police saturating demonstrations with tear gas, often in confined spaces.

The larger doses of tear gas could push an individual’s exposure well beyond the “intolerable concentration” (IC), the mount required to incapacitate them. While the margin between the concentration giving intolerable effect and that which may cause serious injury is high, studies have shown that with prolonged or intense exposure the human body metabolises CS gas into deadly cyanide.

Lab testing has so far proven inconclusive. Egyptian health ministry officials declared that the spent tear gas canisters it tested contained no deadly toxins. Independent analysis allegedly found the tear gas used in Cairo contained a mixture of 2.5 percent bromine cyanide and arsenic – though this could not be verified.

Further testing is under way.