EL SALVADOR: Women Demand to Be Included in Climate Solutions

SAN SALVADOR, Dec 22 2011 (IPS) - Some 100 rural women in El Salvador demanded that the government halt mining and hydroelectric projects that are harming their communities and establish specific programmes with a gender perspective for combating climate change. 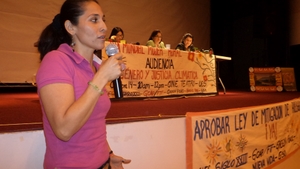 They did not have to stop and ponder in order to describe the impact of climate change on the lives of their families and communities at a public hearing, because they are still dealing with the ravages of a tropical storm that devastated most of Central America.

“Our maize and bean crops were ruined, and when El Espino lagoon burst its banks, the area was flooded and our rabbits drowned,” said Irma Solórzano, from the western department (province) of Ahuachapán.

The Gender and Climate Justice tribunal hearing and a number of related activities took place in San Salvador Dec. 13-18 as part of the international “The World We Want” campaign, launched by the Global Call to Action on Poverty (GCAP) and Greenpeace, among other organisations.

A score of rural women testified how climate change is destroying their harvests and damaging infrastructure in their communities.

Furthermore, at the Gender and Climate Justice hearing they described how the impact of climate change is an especially heavy burden for women, who face increasing stress from their responsibilities for providing meals and water for their families.

“When staple foods are scarce, it’s up to women to look out for where they can be bought most cheaply, because we are basically the heads of our households,” Vidalina Morales, a 43-year-old mother of five, told IPS.

The organisers also held a day of environmental awareness-raising for children. Some children made cardboard clocks to send world leaders the message that time is running out, and urgent action is needed on climate mitigation and adaptation.

The activities concluded Sunday Dec. 18 at a square in central San Salvador, with an event called “A Bicentennial Without Hunger, A Bicentennial Without Poverty,” also aimed at public understanding of how climate change affects everyone’s lives and increases poverty and hunger in rural areas.

“The people in organised civil society are the ones who make the difference,” Marta Benavides, the Salvadoran global co-chair of GCAP, told IPS.

The hearing and other activities were originally planned for October, but had to be postponed due to storms that left 43 people dead, flooded 10 percent of the country and damaged 40 percent of the road network.

The Economic Commission for Latin America and the Caribbean (ECLAC) estimated the cost of rebuilding damaged productive infrastructure in the region at 4.2 billion dollars.

The gravity of the situation prompted the Central American presidents at a Dec. 16 summit in San Salvador to call on international aid agencies to provide funds to begin reconstruction.

But rural women do not only have to cope with climate change, Morales told the panel of four women judges presiding the hearing.

The livelihoods, habitat and health of people in their communities are also affected by productive initiatives fostered by successive governments that, in the long run, have a negative impact on their lives, she said.

Morales specifically referred to the El Dorado gold and silver mine in the central province of Cabañas, 65 km northeast of the capital city, operated since 2002 by Pacific Rim El Salvador, that has affected nearby communities like Santa Marta, her home village.

The wells have dried up and the rivers are contaminated with cyanide and heavy metals as a result of exploratory drilling by the mine company, she said. “When water is scarce, we women have to walk further to fetch it,” she told IPS.

Work at the mine, operated by a subsidiary of the Pacific Rim Mining Corp of Canada, has been suspended since 2008, when the government of rightwing president Antonio Saca (2004-2009) refused El Dorado a mining permit.

Pacific Rim is suing the Salvadoran state for 100 million dollars at the World Bank’s Washington-based International Centre for Settlement of Investment Disputes.

The El Chaparral dam, being built in the eastern province of San Miguel at a cost of 65 million dollars, has also encountered strong opposition from environmental groups and local communities because of the effects it will have on the environment and local people’s way of life.

Meanwhile Ivette Aguilar, an expert on climate change and one of the judges at the hearing, said that governments should not use the vagaries of changing climate as an excuse to promote public policies that are harmful for the population, especially in rural areas.

According to United Nations statistics, 40 percent of El Salvador’s 6.1 million people live on less than two dollars a day, including most of the 22.7 percent of the population who make a living from farming.

Salvadorans have access to an average of 1,700 cubic metres per person per year, which is the threshold for the definition of water shortage.

The declaration adopted at the end of the hearing recommended, among other things, that the human right to water be approved, as proposed in a water bill introduced in Congress in 2006.

It also exhorted the government of centre-left President Mauricio Funes to make food and nutritional sovereignty a central strategy in its agricultural policy, which should also promote sustainable farming practices.

In addition, the women at the hearing demanded that a gender perspective be included in a “food and nutritional security policy”, and that the right to food be enshrined in the constitution.

GCAP’s Benavides told IPS that the conclusions in the declaration, as well as the testimonies of the women who participated in the hearing, will be disseminated at international forums where the situation of women and their relationship to the environment is addressed.

“We want to find out what impact we can have on governments and bodies like the World Social Forum and the Group of 20 (major industrialised and emerging economies),” she said.