GUATEMALA CITY, Dec 2 2011 (IPS) - Millions of documents from the Guatemalan national police archive, shedding light on torture, forced disappearances and murders committed during the1960-1996 counterinsurgency war in this country, are now available on-line thanks to a collaboration with the University of Texas at Austin. 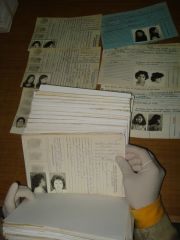 The archives are being painstakingly restored and organised. Credit: Danilo Valladares/IPS

The Politics of Memory conference held Friday Dec. 2 at the University of Texas unveiled a digital archive hosted by the university, holding 12 million of the roughly 80 million pages of national police documents discovered by chance in 2005.

The on-line digital repository from the Historical Archive of the National Police of Guatemala (AHPN) will be available to the public “with no requisite whatsoever,” Alberto Fuentes, one of the experts working at the AHPN, told IPS.

“Essentially, it contains two things: documents on cases involving crimes and violence in the country, as well as records of social control and surveillance, especially of opposition politicians,” Fuentes explained.

“We have found more than 900,000 personal dossiers containing names, photographs and fingerprints of individuals, as well as notes about their political activities,” he said.

In July 2005, the Procuraduría de los Derechos Humanos – the office of Guatemala’s human rights ombudsman – found the abandoned documents by accident in an abandoned munitions depot on the north side of Guatemala City. The messy bundles of records were stacked floor to ceiling in dozens of rooms infested by rats, bats and cockroaches, and many of the files were in an advanced state of decay.

The administrative police records, which date from 1882 to 1997, document the repressive role played by the police during the 36-year armed conflict between leftist insurgents and government forces, which left a death toll of 250,000.

That total included at least 45,000 people who were seized by the security forces and forcibly disappeared, their bodies buried in unmarked graves in cemeteries or in secret graves, often in military bases, according to the Historical Clarification Commission.

The U.N.-mandated truth commission found that the army was responsible for more than 90 percent of the killings in the civil war, most of whose victims were rural Maya Indians.

The records that came to light in 2005 document the role played by the National Police during – and before – the conflict. The AHPN began to salvage and digitise the archives in 2006. The documents are held under tight security.

So far, 13 million documents have been cleaned, classified and digitised.

Documents from the archive have served as evidence in several trials against members of the military prosecuted for human rights abuses committed during the war.

“In just one single case, the disappearance of Fernando García, a trade unionist and student leader, the archive provided the court with 667 documents,” Fuentes said.

García disappeared on Feb. 18, 1984. But it was not until 26 years later that two of those responsible for his death, both former policemen, were sentenced to 40 years in prison on charges of forced disappearance.

Fuentes said the AHPN also provided documents that contributed to this year’s arrest of retired general Héctor López, accused of the crime of genocide in connection with the deaths of more than 300 people between 1978 and 1985, and the arrest of former police chief Héctor Bol for the disappearance of García.

“The documents in the archive are being used as proof to enable the justice system to issue arrest warrants and bring people to trial,” Fuentes said.

Justice is essential to bringing about reconciliation in this impoverished Central American nation.

Ada Melgar, whose father was assassinated during the armed conflict, told IPS that “once it has been clearly demonstrated that army officers and the high command played a role in the thousands of massacres and murders in the country, we will be able to feel a measure of peace.”

The massacres included the wholesale destruction of around 440 indigenous villages in the country, as part of a scorched earth counterinsurgency policy applied in the late 1970s and early 1980s.

“We have filed a case against the state, because we are sure that my father’s death was planned by the security forces,” said the daughter of Hugo Rolando Melgar, a law professor at the University of San Carlos who was machine-gunned on Mar. 24, 1980.

Ada Melgar, who works in the police archive, believes the institution has “very valuable documents that can prove the existence of lists of names of people held in police custody that coincide with many men and women who were captured and disappeared.”

Forensic experts have also found answers in the archive.

“The first photos we saw there were from post-mortem records of several bodies that had not been identified. But there were even references in the records to the fingerprints that they took from the bodies,” José Suasnabar, assistant director of the non-governmental Guatemalan Forensic Anthropology Foundation (FAFG), told IPS.

The AHPN “has become a primary source of information” for the search for people who were disappeared during the armed conflict, he said.

Suasnabar said they had found abundant information in the archive that will help them identify bodies buried in unmarked graves in the cemetery in Escuintla, in the south of the country.

Aura Elena Farfán with the Guatemalan Association of Families of the Detained and Disappeared(FAMDEGUA) told IPS that the police archive “has been tremendously important, because documents about our family members have been found, and it is helping bring the cases to trial.”

“Our concern now is that everyone who in one way or another has come under scrutiny for the repression during the war wants the archive to disappear,” she said.

But 12 million pages are now publicly accessible online, thanks to the collaboration between the AHPN and three institutions at the University of Texas in Austin: the Bernard and Audre Rapoport Center for Human Rights and Justice, the Teresa Lozano Long Institute of Latin American Studies (LLILAS), and the University of Texas Libraries, which is home to the Nettie Lee Benson Latin American Collection.

According to the Politics of Memory conference, the aim of the project is to make the unique historical records “a living archive in service of Guatemala’s historical memory…(bringing) to researchers, human rights activists, and prosecutors around the world an archive that has already begun to help rewrite the history of state repression in Guatemala.”

“By bringing this archive online, LLILAS-Benson is helping to make it possible for people around the globe – from those searching for disappeared friends and family, to those studying institutions of surveillance and state repression, to those exploring the legacy of U.S. involvement in Guatemala – to undertake research using these materials.”