Iran Hedges Its Bets on Syria 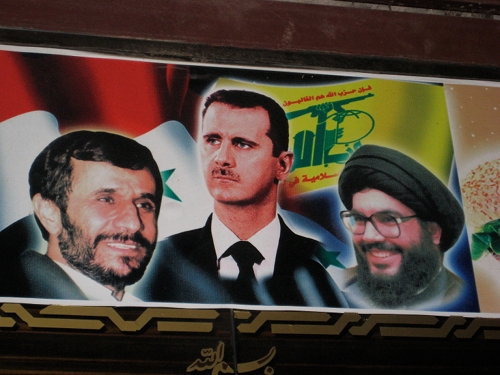 WASHINGTON, Dec 15 2011 (IPS) - Iran is courting the opposition to Syrian President Bashar al- Assad, seeking to maintain a crucial alliance in the event that Assad falls.

So far, Iranian officials have met at least twice with members of the National Coordinating Committee (NCC). The Damascus-based group opposes foreign intervention in Syria and advocates reform to resolve the nine-month-old crisis.

According to Randa Slim, an expert on Syria and Arab democracy movements who is affiliated with the New America Foundation and the Middle East Institute, Iran has also reached out to members of the Syrian National Council (SNC), the main opposition group based outside Syria, through Tunisian Islamic leader Rachid al Ghannouchi.

The uprising against the Assad regime is a serious crisis for Iran, as Syria has been the only Arab country allied with Iran since the latter’s Islamic revolution of 1979.

Syria is also the conduit through which Iran supplies its main Arab partner, the Lebanese Shiite group, Hezbollah, and a key member of a so-called “axis of resistance” that opposes Arab-Israeli peace negotiations and condones the use of force against Israel.

Mona Yacoubian, an expert on Lebanon and Syria at the Stimson Centre in Washington, told a panel discussion Wednesday at the Atlantic Council that Syria plays “an important bridging role not just geographically but ideologically” as the only Arab country in the axis.

Meanwhile Hamas, a Palestinian Sunni Islamic movement headquartered in Damascus, has chosen to distance itself from the Assad government rather than be seen as supporting a regime that is brutally cracking down on fellow Islamic activists.

Without Hamas and Assad, the “resistance front” could shrink to two Shiite Muslim entities: Iran and Hezbollah. Both would lose their pan-Islamic cover as champions of Arab rights.

In trying to salvage its relationship with Syria, Iran has been playing a multifaceted game – reaching out to the opposition and on occasion, criticising Assad, while simultaneously providing the regime with money, weapons and expertise in monitoring computers and cell phones.

An Iranian official, who spoke to IPS on condition of anonymity, said Iran was also encouraging Shiite religious pilgrims from Iran and Iraq to visit Damascus, site of a major Shiite shrine, to make up for the precipitous drop in European tourism to Syria.

Still, doubts are rising about whether Assad can survive a conflict that has grown increasingly bloody and sectarian.

Already the death roll stands at more than 5,000, according to the United Nations, and incidents of massacres of Sunnis by the ruling Alawites, an offshoot of Shiism, and vice versa are mounting.

Although there have been no major defections by Syrian army officers, most of whom are members of the Alawite minority, rank and file soldiers are deserting and joining the so-called Free Syria Army, based across the border in Turkey.

On Thursday, Human Rights Watch reported that former Syrian soldiers have identified 74 commanders and officials who gave orders to shoot to kill unarmed demonstrators or ordered, authorised or condoned torture and unlawful arrests.

Human Rights Watch has urged the U.N. Security Council to impose sanctions on those implicated and to refer Syria to the International Criminal Court.

There has been talk of trying to preserve the regime while convincing Assad and his family to seek exile abroad. Still, it is likely that a post-Assad regime will put some distance between Damascus and Tehran.

Burhan Ghalioun, a Paris-based professor who leads the SNC, told the Wall Street Journal recently that “there will be no special relationship with Iran” if his organisation takes power.

In an interview with CNN Dec. 6, Ghalioun said, “I hope that the Iranians realise the importance of not compromising the Syrian- Iranian relationship by defending a regime whose own people clearly reject it and has become a regime of torture to its own people.”

He added that Syrians, who haVE supported Hezbollah in the past, “are surprised that Hezbollah did not return the favour and support the Syrian people’s struggle for freedom”.

The possibility of regime change

Murhaf Jouejati, a Washington-based member of the SNC, told IPS that a successor government to Assad would “shift back to the Arab mainstream” that supports a negotiated solution of Israel’s disputes with the Palestinians, Lebanon and Syria and better relations with the U.S.

Jouejati accused Iran of trying “to give legitimacy to the NCC and to prop it up on behalf of the Syrian government”. He said this effort would fail because the NCC has not attracted support from protestors within Syria.

Iran’s manoeuvring comes when the country itself is increasingly isolated, facing mounting economic and other sanctions over its nuclear program.

U.S. President Barack Obama is poised to sign into law a bill that could forbid foreign financial institutions conducting business with Iran’s Central Bank from dealings with U.S. banks.

Experts on the region say that Assad’s time in office is limited and that the regime could collapse rather suddenly, as economic sanctions undermine support for the government within the business community and ordinary Syrians recoil from the regime’s brutality.

Frederic Hof, an expert on Syria who is currently advising the State Department, called the Syrian regime “the equivalent of [a] dead man walking” in testimony before Congress Wednesday. But he said he could not predict how long it would remain.

It is possible that the situation will get much worse, with Iran and other interested parties such as Saudi Arabia and Turkey supporting different armed factions and sectarian groups.

“At the end of the day, it’s about regional hegemony,” Aram Nerguizian, an expert on the militaries of the Levant, told the Atlantic Council Wednesday. Syria, he said, is likely to become “an arena for proxy competition”, feeding a conflict similar to the civil wars that have previously convulsed Iraq and Lebanon.