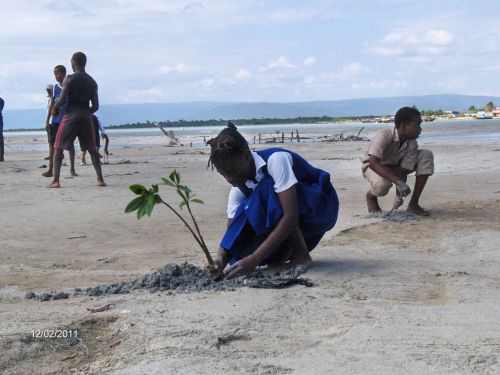 KINGSTON, Dec 9 2011 (IPS) - As increasingly extreme and erratic weather driven by the earth’s changing climate exacts a heavy toll on Jamaica’s population, economy and infrastructure, a consensus has emerged among scientists and policy makers here that adaptation measures must include hazard mitigation.

Despite an array of projects, there is no single unit to coordinate the country’s policy initiatives. But under a document dubbed the second national communication on climate change, agencies are now working more closely together to forge sustainable solutions, and acknowledge the critical involvement of local communities.

Over at the Forestry Department, conservator and chief executive officer Marilyn Headley outlined several initiatives aimed at enhancing efforts to cope with the effects of climate change.

“Half the people tend to forget that without forest cover, you can’t mitigate against climate change,” Headley told IPS, pointing to the importance of forests on the steep hillsides that makes up much of this northern Caribbean isle.

Since the project started in February this year, Headley said, the Forestry Department has begun the rehabilitation of 300 hectares of degraded watersheds; assessment of the additional 2,600 hectares of forest to be given protected status; as well as the production of 300,000 timber and fruit tree seedlings to be used in a replanting programme.

Plans are also in place for the installation of river training structures and for equipping and training local communities to prevent and control wild fires.

Also underway is an assessment of forest land use cover change to determine the rate of deforestation on the island. One drawback, Headley rued, is that only a third of Jamaica’s 336,000 hectares of remaining forests are controlled by government.

More worrying, some say, is that agriculture – the sector which has been most impacted by extremes of rain and drought – is yet to benefit from strategies to mitigate the impacts of climate change.

Entire agricultural sub-sectors are in decline. In 2008, banana exports ceased due to the damage caused by years of consecutive storms. Farmers were too broke to bounce back, and it is the same story in the coffee industry.

At the same time, the second national communication on climate change, which guides climate change policy, identifies agriculture as “one of the key economic sectors in Jamaica”. The document warns that changes in temperature, rainfall and atmospheric carbon dioxide are likely to affect production.

Jamaica’s vulnerability to the impacts of climate change can only be exacerbated by its inability to finance maintenance and repairs to its infrastructure and lack of knowledge in communities. It is why community engagement and awareness have been central pillars in the adaptation works now being undertaken, Headley said.

But despite a high level of knowledge among Jamaicans, a staggering 73 percent have no insurance on their homes, a Knowledge and Attitude Survey undertaken by the Meteorological Service found.

Both the Forestry Department and the National Environment and Planning Authority (NEPA) – the agency responsible for environmental protection – have formed community-based groups that they say are critical to the success of the mitigation process.

This includes programmes to encourage community-level management, and to find and fund alternate “livelihood activities” for those who live off the resources, NEPA’s director of Policy and Planning Anthony McKenzie told IPS.

Come next January, the Forestry Department will add three Local Forest Management Committees to the eight already in existence.

“These communities will become legal entities for primarily management and protection of the forest,” Headley said.

The consequences of Jamaica’s lack of preparedness were dramatically illustrated earlier this year, when one day before the start of the 2011 hurricane season the road network buckled under eight days of heavy rains. Already seriously damaged by more than 12 extreme weather events in five years, bridges and roadways collapsed, threatening lives, homes and marooning communities.

Drains overgrown by weeds and made useless by debris, and the walls of the gullies – built to carry water from the interior – broke up from decades of neglect, resulting in widespread flooding, property damage and loss of income.

An assessment of 900 communities by the Jamaican authorities at the start of 2011 found that 310 were highly vulnerable to natural disasters, Ronald Jackson, the island’s disaster response chief, said in June.

Jackson, who heads the Office of Disaster Preparedness and Emergency Management (ODPEM), blamed “poor development practises” which, he said had retarded development by continuously shifting resources to the provision of relief and reconstruction.

“We can no longer use the very limited resources to chase the purchase of relief supplies for the large number of persons who reside in vulnerable conditions. We need to look at reducing the number of people in the country who are vulnerable,” he said.

Technocrats say that preparation for climate change here means fortifying communities against natural disasters, formulating strategies, and educating citizens on how to deal with the effects of these events.

International organisations have funded a range of initiatives to help local communities better prepare themselves. At the national level, there are efforts to “mainstream” climate change into government policies.

Forestry and coastal protection are two of the areas being funded by a European Union grant to increase resilience and reduce natural hazard risks in vulnerable areas.

The 4.13-million-euro project will, among other things fund institutional strengthening for climate change adaptation and risk reduction projects across eight agencies and ministries.

Already in its first year, the 30-month project is being managed by the United Nations Environment Programme (UNEP) and the Planning Institute of Jamaica (PIOJ).

Among the government agencies, NEPA is charged with shoring up the island’s natural coastal protection systems and protecting biodiversity, while the Forestry Department, which manages the state- controlled forest areas, will rehabilitate watersheds and bolster the management and protection of forests.

To carry out its mandate, NEPA is overhauling its processes to include policies that highlight climate change issues, McKenzie told IPS.

Some examples include replanting sea grass beds and mangrove forests, reducing pollution, and ensuring that its guidelines promote sustainable use of the natural environment.

In Portland Cottage, a fishing village on Jamaica’s south coast, NEPA has worked with the Caribbean Coastal Area Management Foundation to plant more than 3,000 mangrove seedlings along the coast, to fortify the community’s coastal defense.

According to reports, in 2004, thousands of lives were saved because the mangroves prevented storm surges associated with Hurricane Ivan from destroying homes in that community.

NEPA and Panos Caribbean are also collaborating on climate change through education in the communities of Portland Cottage and Mocho “to lessen the gap” between policy and the transmission of information, Panos’s regional director of media, Indi Maclymont Lafayette, told IPS.