DURBAN, South Africa, Dec 8 2011 (IPS) - The last hours of the 17th United Nations climate change summit in Durban have begun. Since the arrival of almost 150 ministers and heads of state on Tuesday, negotiations have moved to the political level. They are expected to debate the way forward until late Friday night, or even Saturday morning. 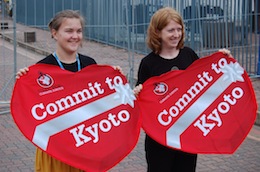 Almost nobody believes that a second, comprehensive commitment period of the Kyoto Protocol is still possible. Credit: Zukiswa Zimela/IPS

Hopes for a breakthrough, or at least tangible results, are slim. Almost nobody believes that a second, comprehensive commitment period of the Kyoto Protocol, the only international legally binding instrument to reduce greenhouse gas emissions, which includes all major emitters, is still possible.

For this to happen, emerging economies like China, India, Korea, Mexico and South Africa would have to come on board, as well as the United States, a country which has not even ratified the first period of the protocol. Other major emitters, like Canada, Russia and Japan have already proclaimed their disinterest in a second commitment period.

Earlier this week, negotiations briefly looked somewhat promising, when China’s head negotiator Xie Zhenhua announced his country was open to internationally, legally binding agreements. But his statement soon turned out to be part of a strategic game. But Zhenhua did not say that China was willing to “be part of” those binding agreements as well.

Many climate experts believe the U.S. has played a particularly strong role in slowing down the progress of the negotiations.

“The Obama administration has apparently come to Durban not to be constructive, but to hold other countries back. Their excuses for inaction ebb and flow like the tide. Once one excuse is removed, another emerges,” lamented World Wide Fund for Nature spokesperson Caroline Behringer.

Even U.N. secretary general Ban Ki-moon dampened expectations during the opening of the high-level segment of the summit on Tuesday. A comprehensive, legally binding agreement “could be out of reach”, he said.

While negotiators try to come to a decision, the atmosphere in the corridors of the Durban conference centre, where the summit is taking place, remains tense. Ministers and heads of delegations have retreated to conference rooms to further debate the contents of the 131-page document, the basis for all negotiations. Outside of the closed doors, delegates talk with lowered voices. Until the official announcement of the end-result, everyone is holding their cards close to their chests.

The possibility of concluding with a roadmap for an agreement to negotiate emission reductions from 2015 that will include major emitters and emerging economies, also stands on shaky ground. Under the agreement, all major carbon emitters would agree to internationally legally binding reductions by 2020 at the latest.

“What we are seeing is a lack of political will by some major emitters to reach an outcome in Durban that is fair and ambitious and that saves the lives and livelihoods of millions of poor and vulnerable people who are affected by climate change today,” says Tonya Rawe, senior policy advocate of global humanitarian organisation CARE.

“Some parties are already talking about delaying decisions on a legally binding agreement until 2020. This is a disaster as it can create an entire decade of zero progress,” he added.

Delegates fear that only a non-binding declaration will be reached, through which countries will vaguely declare their willingness to agree to binding reduction goals at some point in the future.

So far, only the European Union (EU) and some other European countries, like Switzerland, have vouched to continue pushing for commitments from major carbon emitters that are currently not part of the Kyoto agreement over the remaining hours of the summit.

“All major economies need to commit, of course respecting common but differentiated responsibilities. If they will not commit to an agreement in the foreseeable future, they take on an unbearable responsibility,” warned Connie Hedegaard, commissioner for climate action at the European Commission who spoke on behalf of the EU.

The negotiations do not only revolve around an extension of the terms of the Kyoto Protocol. Another important subject is the adoption of the Green Climate Fund (GCF) through which financial support for climate change mitigation and adaptation efforts will be channelled to developing countries. By 2020, 100 billion dollars should be mobilised annually from public and private funds.

But the discussions around the GCF, too, have been staggering, after several countries, including the U.S., Bolivia, Saudi Arabia and Venezuela announced they were dissatisfied with the draft document and would like to re-open the text for amendments.

In addition, the global financial crisis has slowed down progress on the fund: rich countries, that are supposed to partially finance the GCF, are hesitant to make budgetary commitments. As it looks, the fund is likely to be signed off in Durban, if at all, but as an “empty shell”, without tangible plans on how it will be financed.

“We don’t have any more time to lose to safe those who are most threatened by climate change,” urged Mizanur Rahman Bijoy, a researcher with the Network on Climate Change in Bangladesh. “But instead of taking action, governments are mainly concerned about their national economies. That way, no important and necessary decisions will be made.”