KATHMANDU, Dec 7 2011 (IPS) - Sonikumari Jha puts on her green camouflage fatigues, deftly laces up her boots and is ready to step out and announce her decision to embrace a new life. Her four-year-old son, who has been watching the same rote for years, is puzzled by an important omission. “Mama, you have forgotten your gun,” he calls out. 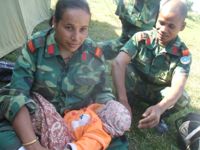 “No darling, mama won’t have to carry a gun any more from today,” the 26-year-old says with a smile.

Eight years ago, Sonikumari joined the Maoist guerrillas, who were waging an underground war to abolish monarchy in Nepal and promulgate a constitution of, by and for the people.

Today, the section commander in the 2nd Division of the People’s Liberation Army (PLA) has decided to say farewell to arms five years after the insurgency ended.

Hundreds of Maoist women warriors, who had joined the PLA attracted by its promise of equality and justice during the 10-year war fought from 1996, are now bidding adieu to warfare for the sake of their children, like Sonikumari.

“After our People’s War ended in 2006, the combatants lived in cantonments hoping they would be inducted into the national army,” says Yam Bahadur Adhikari, commander of the 1st Division of the PLA.

“It took almost five years for things to move. During that long interval, it was natural that many of them would marry and have kids. Now that the government has finally started addressing the lot of the PLA, most of the mothers, who have young children, are opting for voluntary retirement instead of joining the army.”

When the Maoists signed the peace accord in 2006, it was decided that the PLA, comprising over 19,500 combatants, would be merged with the Nepal Army. However, after opposition from both the army and major political parties, it was decided that only up to 6,500 guerrilla fighters would be recruited.

The rest have two options: voluntary retirement with cash compensation or rehabilitation, which includes education since many dropped out of school to join the guerrillas, vocational training and assistance in setting up micro business.

In November, a Special Committee fanned out across the seven major cantonments to ask the PLA fighters what they would like to do.

According to Lt-Gen Balananda Sharma, coordinator of the committee, over 60 percent of the combatants want to join the army. The rest are seeking voluntary retirement, with only six plumping for rehabilitation.

But of the 3,526 women combatants, most of the married ones, especially those with young children, are seeking voluntary retirement.

Besides the necessity of looking after the children as well as fears that they might fail the physical fitness test, many of the women, married to fellow PLA combatants, are opting to return to civilian life so that their husbands stand a better chance of joining the army.

Muna Limbu, the daughter of a poor farmer in Ilam, eastern Nepal’s tea garden district, joined the PLA as a ninth grader. Three years ago, the 26-year-old married fellow PLA soldier Bimal Limbu and the couple now have an 11-month-old daughter.

As Bimal wants to be in the army, Muna has decided to take voluntary retirement though the decision leaves her unhappy.

“My dream was not fulfilled,” she says and her face darkens. “I joined the Maoists to see the birth of a people’s republic where there would be no oppression and injustice. I sacrificed the best years of my life and now, have been told by the party to make a sacrifice once more for peace and the new constitution.”

Though the Maoists agreed to disband the PLA within six months of the peace accord and help to write a new constitution by 2010, neither materialised.

Now, with the Supreme Court ordering the government to complete the new constitution by May 2012 or face fresh elections, the Maoists, who now head the government, have finally started the process of discharging the PLA.

The combatants are not happy with the options offered; still they have to make a choice under pressure from the party.

Though unmarried women warriors are free to pursue their dream to join the army, there are some noted exceptions.

Kamala Sharma, who received a bullet in her left knee during the civil war is now severely disabled. Kamala, in her twenties, wants to join the army but doesn’t stand a chance due to the physical fitness criteria.

Though the government has announced education, marital status and age concessions for PLA fighters wanting to join the army, dozens of disabled warriors – including those suffering from untreated war injuries, amputees and the visually impaired – are agonised over their future.

Adhikari says there are 19 disabled women in his division alone. Their number will be higher when all the seven main cantonments and 21 satellite camps are taken into consideration.

“It’s an injustice as well as humiliation for the disabled women combatants,” Adhikari says. “They are being forced to seek voluntary retirement. But if they do that, the money they will get will be spent on treatment and there will be nothing left to ensure their future.

“Also, in our society, women have to work harder than men. The disabled combatants can manage in the cantonments because their comrades look after them. But how will they survive when they go back to their village homes?”

The PLA is urging the party and government to come up with other options for women combatants; the Special Committee too has made similar recommendations.

“Those with young children can be given leave while the disabled can get non-combatant jobs in state departments,” Adhikari says. Otherwise, he warns the consequences could be grave.

“These are people who received combat training and know how to make explosives and plan ambushes,” he says. “If ignored, frustration and hopelessness could drive them into crime. Then the cycle of violence will never end in Nepal.”