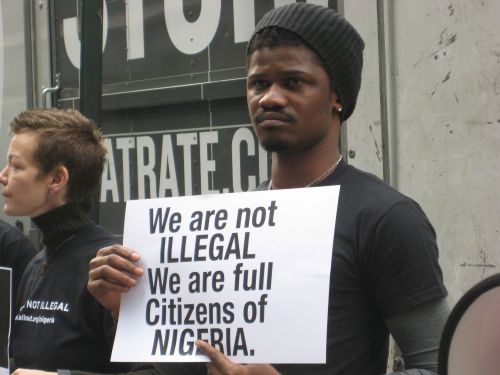 UNITED NATIONS, Dec 7 2011 (IPS) - “The prospect of arriving home… being arrested at the airport – that’s kind of scary,” said Osazeme O., a dual citizen of Nigeria and the UK, in a wry understatement.

She was standing outside the Nigerian mission to the United Nations, on the sidewalk beside busy Second Avenue, where a small group gathered Monday to demonstrate.

Osazeme was referring to the Nov. 29 passage of a bill in the Nigerian Senate criminalising same-sex marriage, broadly defined in a country that has already banned homosexuality.

Yet the Same Sex Marriage (Prohibition) Bill, which must pass the House of Representatives and be signed by the president before becoming law, would diminish the rights of gay, lesbian, bisexual, and transgendered Nigerians even further, as banning same-sex marriages and civil unions is just the tip of the iceberg.

“Any person who registers, operates or participates in gay clubs, societies and organisation, or directly or indirectly make public show of same sex amorous relationship in Nigeria” is liable to be imprisoned for 10 years, the bill says.

The same term is applicable to people and organisations that “witness, abet and aids the solemnisation of a same sex marriage or civil union, or supports the registration, operation and sustenance of gay clubs, societies (and) organisations” and those who “directly or indirectly make public show of same sex amorous relationship”.

“What on earth is an indirect public display of affection?” wondered Akwaeke, a Nigerian student and writer, in an interview with IPS.

“Basically if you were holding hands with a friend of yours of the same sex you could be arrested,” she said. “So there’s a lot of loopholes there that are going to be used to persecute a lot of people. People aren’t talking about that because everyone thinks it’s about marriage. It’s not.”

Not, it’s not, agrees Osazeme. “This isn’t really just about queer rights. This is about rights for everybody.”

“I think this law is really about distraction,” she told IPS. She called it “typical of the way Nigerians use deflection in our politics”, elaborating that for most Nigerians, “our concerns are about the daily hustle and grind of living in Nigeria, like, ‘Will I have light when I get home? Will I have running water?’ Things like that.”

“It’s a distraction. There are so many other things our government could be doing right now,” Osazeme said. “If we open this gate to this kind of discrimination, what next?”

The bill also has the potential to pose serious health risks by criminalising organisations that are associated with or work with or on behalf of members of the LGBTI community. Such organisations do much of the legwork in caring for those with sexually transmitted infections, such as HIV/AIDS.

The organisations that handle AIDS, or rape, Osazeme said, “are now under attack. And in my opinion, if the government cannot step in and provide those same services, then they need to sit down.”

“We’re putting our population at dire risk,” she added.

Human rights organisations have labelled the law as dangerous, reprehensible and even downright ridiculous.

The justifications for this bill from Nigerian lawmakers range from cultural to religious to the simply absurd.

“Should we allow for indiscriminate same-sex marriage, very soon the population of this world would diminish,” Senator Ahmed Lawan, who supports the bill, told the BBC. “In fact, we are protecting civilization in its entirety.”

Scott Edwards, advocacy director for Africa at Amnesty International, suggests that the bill is “a way of making political gain”, calling it “a reprehensible bill that would appear to be designed to simply single out Nigerians because of their perceived or actual identity” simply because it’s easy.

The bill “wouldn’t just have implications for marriage” but for any relationships, real or perceived, between same sex couples, or for any NGOs or individuals who interact with those individuals, Edwards tells IPS.

It “introduces very vague notions of the organisations of gay rights”, Dittrich told IPS. “This is going to be a tool by the government to silence opposition and other civil society organisations.”

Furthermore, he added, “in Nigeria, politicians use the LGBT community as a scapegoat while they should address issues like poverty or corruption.”

The question of intervention

Whether or not outside governments can step in or exert pressure on Nigeria not to pass the bill into law is tricky, and highly sensitive.

UK Prime Minister David Cameron has suggested that aid to countries that refuse to recognise gay rights might be cut, saying that “British aid should have more strings attached in terms of… ‘Do you persecute people for their sexuality?'”

Nigerian lawmakers responded defiantly, with one, David Mark, saying countries who threaten to cut aid should just keep it, according to the BBC. Other African governments accused Cameron of undermining their sovereignty.

Similarly, on Tuesday, the U.S. government announced it would attempt to use U.S. foreign aid to support gay and lesbian rights.

But Dittrich says that using financial and economic threats to punish countries criminalising homosexuality are not as effective as other options, as African NGOs have said that doing so only stiffens the opposition to the LGBT community, which is seen as the cause of economic threats such as aid cuts.

Rather, sending funds to support LGBT organisations would be “a wiser approach”, said Dittrich, by giving them more power and a stronger voice.

“African countries can react badly to external pressure” they perceive to be attempting to influence their ways, said Chris Cooper, one of Monday’s demonstrators. “You can do more harm than good.”

But no matter how outside governments choose to act or how Nigeria chooses to respond, he pointed out a fundamental truth about this latest bill by Nigeria’s government: “The people they are really hurting (are) themselves.”