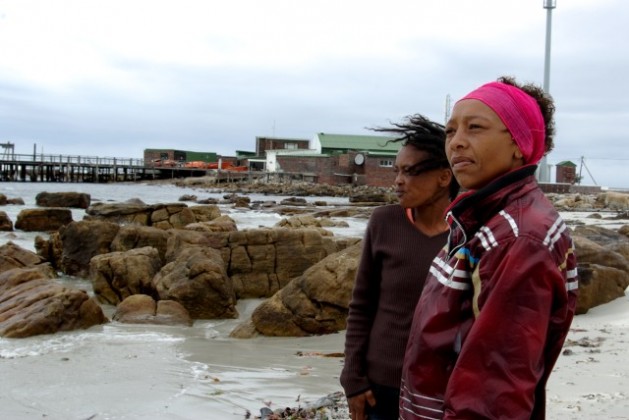 Rita Francke and another fisherwoman at the jetty, in front of the old crayfish factory at Witsands. Credit: Lee Middleton/IPS

OCEAN VIEW, South Africa, Dec 12 2011 (IPS) - Having observed changes in the sea and the life cycles of the rock lobsters that their livelihoods depend on, a group of fisherwomen from the Western Cape, South Africa are calling on government to adjust fishing seasons to adapt to what they claim are climate change-related alterations.

About 40 kilometres south of Cape Town, the fishing community of Ocean View is mostly made up of “coloured” families forcibly removed from the Cape peninsula’s picturesque seaside villages under the apartheid regime in the late 1960s. Most continued to eke out a living through fishing, and until recently, almost all the fishers here were men.

Sahra Luyt is an exception. With her husband, she began fishing West Coast rock lobster (locally called “crayfish”) nearly 20 years ago for a company. Eventually Luyt went her own way.

“I felt women were being dictated to in fishing, so I started the association and ladies joined,” Luyt recalled of her 1999 decision to found the South African Fisherwomen’s Association (SAFWA).

SAFWA now counts some 70 members, most hailing from the peninsula’s poorest townships, and many of whom say they have encountered difficulties with men resentful of the women’s presence on the sea.

“Before it was very difficult, but now it’s not that bad – we’ve proven ourselves,” Luyt said.

With their own single outboard-motor boats and ring nets, the women participate in the near-shore commercial rock lobster fishery, bringing in around 600 to 800 kilogrammes of lobster each season, normally from November to June. A live rock lobster can fetch 14 to 20 dollars/kg. Though gender dynamics have improved, the women now face other troubles.

“Previously where we’d find a lot of fish, we don’t find many. Also I’ve been to sea these days when you go out on a nice normal sea day and all of a sudden the weather is standing up and you have to rush back home,” said Luyt of the changes she has observed. 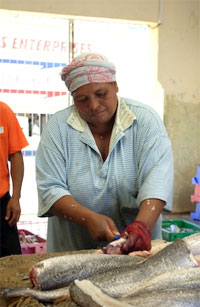 Women have typically only been employed in the fishing industry in the processing work. Here a woman fillets fresh hake at a rate of 15 seconds per fish. Credit: Lee Middleton/IPS

The fisherwomen also cited changing water temperatures, more severe tides, and changes in the life cycle of the rock lobster.

“Over the last few years, the crayfish quality has shifted from November when it used to be good. Now we find they’re still molting, or softening their shells to grow, and they’re also in berry, which means the female is still carrying eggs,” Luyt explained. “I’d say those things are climate change.”

SAFWA has called on the South African Marine Resource Management (MRM) to adjust the fishing season to correspond with the changes they say they have observed, and possibly to lengthen it due to the unpredictable conditions they say are a result of climate change.

But fisheries scientists respond that seasons and policy are based on science-based evidence, and so far, the links between fish stocks and climate change are not sufficiently clear. SAFWA can appeal the decision but are yet to do so.

“There have clearly been ecological changes that have driven differences we’re seeing, and they may be linked to climate change, but we can’t prove it,” said Chief Director of MRM, Dr. Johann Augustyn.

Though reports like a 2009 international study led by Edward Allison have made significant progress in linking the impacts of climate change to fisheries around the world – and thus providing some guidance for predictive management changes in those places – data for Africa is sorely lacking.

Tabeth Chiuta, regional director at the World Fish Center, a non-profit research organisation, agreed the science simply is not there yet.

“In Africa, we don’t have enough science to make practical changes. Most of the reaction we are seeing in Africa is based on these global assessments, which have not zeroed in to the specific location like that of these small-scale fisherwomen. Is that change which they are seeing due to climate change? It could be due to overfishing. For Africa the science is not there, and it needs to be generated,” said Chiuta.

But the fisherwomen, like so many Africans who rely on fishing for their livelihoods, do not have time for the science to catch up. According to Chiuta, 10 million African families are involved in small-scale fisheries and fish for livelihoods, and 15 percent of the working population on the continent is employed in fisheries.

MRM head of research, Kim Prochazka, recognised the urgency of the situation. “Faced with this huge amount of uncertainty there’s no small-scale specific directed interventions you can do. But it’s going to take us far too long to get to that understanding. We’ve got to do something now. So you have to take a pragmatic approach that puts you in the best position to cope with whatever changes may come at you,” said Prochazka.

According to Prochazka, this means taking a pro-active approach to rebuilding fish stocks to more resilient levels, managing fisheries on an ecosystem wide level rather than for isolated fish stocks, and developing aquaculture technology in order to prevent a food security catastrophe.

Chiuta agreed that these interventions were the best options fisheries management had in the face of uncertainty. She added that building the knowledge base, improving monitoring, developing capacity to implement adaptation and mitigation strategies, and working on policy and institutional reforms were also all critical around the continent.

Meanwhile, West Coast rock lobster stocks are the lowest they have ever been, with no clear sign of improving. MRM estimates the population at only 3.5 percent of what it was before people started harvesting them on a large scale.

Rita Francke is a single mother supporting three children. When Sahra Luyt appeared and taught her to fish, she had not had regular employment for years, and constantly worried about feeding her family. Asked what she would do if the rock lobster fishery moves or collapses, Francke joked, “I’d move!” Then, more sober, she reflected, “I don’t know what I’d do. I’d have to find a job, cleaning houses or something. I don’t know.”