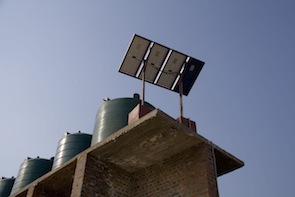 Fair Trade in Tourism South Africa (FTTSA) has developed a green rating system for the tourism industry that certifies tourist accommodation, activities and attractions in South Africa against standard environmental criteria. It also considers fair trade labour, socio-economic and management practices as part of the assessment.

Tourists can also book entire tour packages that have a minimised carbon travel footprint – a first such offering in the world. “We hope the model will be adopted internationally,” says FTTSA certification manager Lisa Scriven, who helped to develop the concept, which was launched in November.

The green rating system promotes responsible tourism, including environmental management, low energy and water use, waste avoidance, recycling and green procurement, building design and construction, the minimal use of chemicals as well as a focus on biodiversity and gardens.

To be certified as environmentally friendly, a tourism business will undergo an assessment by a FTTSA team as well as by an independent review panel made up of South Africa’s top tourism experts.

Scriven says that there are 14 sections of standards and criteria, each with several sub- sections, according to what type of business is assessed. The FTTSA team will measure on-site investments in the environment such as solar geysers and off- site projects such as involvement in local schools. They make an in-kind as well as a financial assessment and compare it to the company’s turnover; to see what percentage they invest in the environment.

FTTSA also cooperates with the South African Department of Environmental Affairs and Tourism (DEAT) and the Tourism Grading Council. Every two years, the business’ credentials will be re-assessed to make sure it still fulfils all requirements.

“It’s about tourism that respects the environment and positively affects the economic and social development of local communities,” explains Scriven. Sustainable tourism has become a trend, she says: “I don’t think many people see sustainability as an option anymore. It has become an expectation.”

One of the FTTSA certified tour operators is Ocean Blue Adventures in Plettenberg Bay in South Africa’s Eastern Cape. It offers conservation-oriented whale and dolphin marine eco-tours and has set up the Orca Foundation, which finances conservation in tourism, poor communities around Plettenberg Bay and schools. Visitors are also asked to plant trees to offset the carbon footprint of their travel.

“Nobody was protecting our bay, the reef, the whales and dolphins who come to breed here. We realised we had to do something ourselves to keep it sustainable,” says Ocean Blue assistant general manager Natasha Lilford.

According to Lilford, more and more travellers inquire about fair trade and environmental criteria before they book accommodation or a tour. “People want to give back. They want to spend their money at a place where it goes to a good cause and they can see a difference.”

Through the certification scheme, South Africa wants to boost its share of the global tourism market, which in 2008 stood at just 1.3 percent, according to DEAT statistics. For the state, the tourism sector is an important income earner. It contributed 354 billion dollars, or 7.9 percent, to South Africa’s GDP in 2010, up from 2.7 percent the year before.

“Responsible tourism is about creating better places for people to live in, and better places to visit. South Africa’s natural environment is one of its greatest tourism resources, and therefore the tourism industry needs to be actively involved in conserving and protecting it,” he added.

The FTTSA certification scheme wants to do exactly that, says Scriven. It promotes a more mindful approach to tourism that aims to sustain and improve land, water and air by lessening travellers’ impact on the environment. “Tourists are beginning to show a more responsible attitude towards their travel plans,” she notes.

Almost 70 hotels, bed and breakfasts, activities and tour companies have been FTTSA certified so far. It is only a start, as there are more than 40,000 places to stay in the country. “It’s just a small drop in the bucket,” admits Scriven. “We still have a long way to go, but we are on the right track.”

Perhaps one reason for the slow uptake has been the global economic crisis, which has reduced tourism numbers and forced tourism businesses to tighten their belts since 2008. Because in order to achieve a level of environmental friendliness that will get them certified, travel establishments have to make an initial investment: they have to change light bulbs, install solar water heaters, plant indigenous gardens, insulate windows, buy less toxic paints and so on.

“It is an investment, but in the long term, they will save money due to reduced running costs. They will eventually also gain preferential market access,” believes Scriven. “The environment and the economy have become inseparable.”

This holds true for another FTTSA certified business, the Bartholomeus Klip Farmhouse, a small hotel on a working wheat and sheep farm with an adjoining nature reserve in Wellington, an hour’s drive north of Cape Town. Apart from funding and managing the nature reserve, a national heritage site, the hotel management has turned the guesthouses and cottages into “green” buildings.

“We only use water from mountain springs, have installed solar geysers and bio-toilet systems, recycle and buy all food locally,” says manager Lesley Gillett. “In the long-term, it’s worth your while. We’re starting to see a return on our initial investment.”

If more and more tourism businesses follow this example, South Africa might soon become a global frontrunner in “green” tourism.