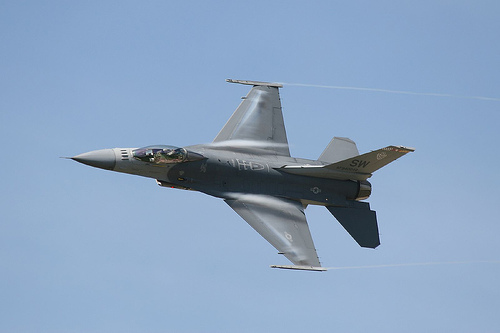 NEW YORK, Dec 14 2011 (IPS) - As the United States withdraws the last of its 50,000 troops after a nearly nine-year military occupation of Iraq, visiting Iraqi President Nuri al-Maliki had one final request: billions of dollars worth of U.S. weapons for his ragtag armed forces.

A longstanding Soviet and later Russian ally, Iraq under former president Saddam Hussein never had an ongoing military relationship with the United States.

Now, Iraq is gradually abandoning its huge arsenal of primarily Russian and French equipment in favour of U.S. arms.

At a White House meeting Monday, al-Maliki was assured a second batch of 18 sophisticated F-16 fighter planes to help rebuild the country’s dilapidated air force, whose helicopters and missiles the U.S. destroyed during its long-drawn-out war beginning March 2003.

The Iraqis have already indicated that their military needs will include a total of 96 F-16 fighter jets in four separate orders.

The Iraqi president told the administration of U.S. President Barack Obama that his country will depend on the U.S. not only for new weapons systems but also for training under the U.S. International Military Education and Training (IMET) Programme.

Early during the rebuilding stage of the Iraqi Security Forces (ISF), he said, the U.S. outfitted Iraqi troops with secondhand Soviet-legacy small arms and donated equipment from former Warsaw Pact nations, as the average Iraqi soldier in Hussein’s military was familiar with these arms.

But from 2005 onwards, he pointed out, the goal became equipping the Iraqi military with more and more U.S. armaments via the Pentagon’s government-to-government Foreign Military Sales (FMS) channel.

The DoD said the arms package would make Iraq “a more valuable partner in an important area of the world, as well as supporting Iraq’s legitimate needs”.

The United States also has a hidden agenda in beefing up the Iraqi armed forces against neighbouring Iran, which already has strong political influence on al-Maliki’s government.

Under Saddam Hussein, the air force, the army and the navy were equipped primarily with Russian and French weapons systems, including Aerospatiale and Mi-17 helicopters, and T-55 and T-72 battle tanks.

The total strength of the ISF has declined from about 900,000 troops under the Saddam Hussein regime to the current 250,000.

Armed with rising oil revenues, the Iraqi government is now in the process of rebuilding all three services: the army, the air force and the navy.

According to the latest figures from the Congressional Research Service, Iraq’s total arms purchases from 2002 to 2005 amounted to about 8.1 billion dollars.

The United States was the primary supplier accounting for about 5.2 billion dollars in arms.

These funds were used to purchase equipment, build infrastructure, conduct training and sustain the ISF, the Iraqi border guards, police forces and the intelligence services.

Between 2005 and 2011, the Pentagon allocated around 20.6 billion dollars towards the ISFF, he said.

As the Iraqi state institutions began to take form and the central government under al-Maliki grew in confidence (and state coffers began receiving healthy intakes of energy revenues) more and more Iraqi orders were placed via FMS, with some 16 billion dollars worth of requests for various equipment, facilities construction and services placed in 2008 alone.

Darling said reports in the Iraqi media have stated that further such orders from the U.S. could reach up to 26 billion dollars, with 13 billion dollars in FMS requests projected by 2013.

The first such stage was meant for filling out the ranks with manpower, the second for ordering equipment and the third for absorbing the equipment and discerning where any capabilities gaps remain.

“Going forward, we project Iraq to be one of the largest military markets in the Middle East, behind Saudi Arabia and alongside Israel, Iran and the UAE,” Darling predicted.

Iraqi defence ambitions remain broad and while much of the navy reconstruction is nearing completion, much work remains to be done in the IQAF (Iraqi Air Force) and land forces, he added.