The Oil That Comes in from the Cold

CARACAS, Dec 30 2011 (IPS) - Thanks to soaring oil prices and new technology, oil producers in the hot sands of Arabia, the torrid Niger delta or the humid plains of the Orinoco are facing new competition from rivals in the frozen North. 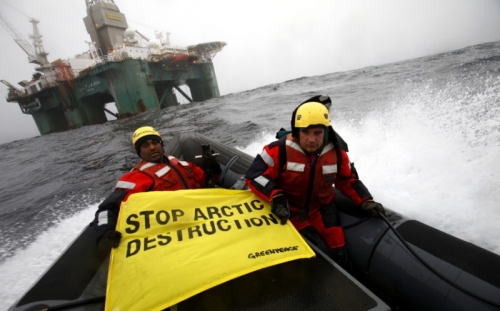 The Anglo-Dutch Shell group was given the green light by the U.S. environmental agency to drill for oil off the coast of the northern edge of Alaska from July 2012, a project in which the company has already invested 3.5 billion dollars.

Meanwhile U.S. oil giant Exxon signed an agreement with Rosneft, Russia’s largest oil producer, to invest 3.2 billion dollars in exploring for oil and gas under the Kara sea, in northwest Russia. Another alliance, between BP (British) and TNK (Russian), is regretting its failure to win this opportunity.

The Danish island of Greenland has also called for bids for offshore oil exploration, and Exxon and the U.S.-based Chevron have been quick to express interest.

The alliances woven between Exxon and Rosneft, BP and TNK, or Total and Novatek long after the Cold War can only be explained, according to Mijares, by the fact that "global capitalism is…based on the control, production and burning of fuels, mainly oil.

"The current scenario reminds scholars of the situation in northern Italy during the Renaissance. There were gigantic powers, like the Holy Roman Empire, France, Spain, and the Papacy, and small powers such as Verona, Venice, Florence or Milan. It was a very unbalanced multipolar system," the international relations expert said.

In those circumstances, "alliances did not guarantee anything, the pledged word was not worth much, and what mattered was to try to be very strong, because today's ally might be tomorrow's enemy, and vice versa. The world nowadays is going through a similar phase," he said.

"Instead of a family like the Medici, we have oil companies, private entities that are capable of competing with states and that create a dynamic interaction between cooperation and conflict, such that political and economic actors can cooperate in one sector or geographic area, while in another they are in all-out conflict. This situation will not be unusual in the first half of the 21st century," said Mijares.


Canada, for its part, has Arctic oil deposits to add to the tar sands in its western provinces, putting it among the countries with the world’s largest oil reserves. It also has the advantage of proximity to the largest market in the world, the U.S.

Between 13 and 20 percent of the undiscovered oil on the planet is under the Arctic ocean, according to the United States Geological Survey (USGS), most of it at accessible depths, which increases the likely profits if demand increases as expected and prices remain at or above 100 dollars a barrel.

“Economic growth in China and India, and above all OPEC policies, have paved the way for producers like Russia to exploit more of their reserves and compete with oil from tropical regions,” Víctor Mijares, a professor of international relations at Simón Bolívar University in Caracas, told IPS.

The Organisation of the Petroleum Exporting Countries (OPEC), made up of Algeria, Angola, Ecuador, Iran, Iraq, Kuwait, Libya, Nigeria, Qatar, Saudi Arabia, United Arab Emirates and Venezuela, produces about 30 billion of the 88 billion barrels a day of crude consumed worldwide, and supports the price of oil by cutting down on production when the market is over-supplied.

Exploring for oil under the Arctic ocean boosts the commitment of the global energy industry and the world economy to fossil fuels; reflects the strategies of traditional and emerging powers; and demonstrates the persistence of environmental risks associated with the oil and gas industry.

Contradicting those who hold that oil supply is declining inexorably, Leonardo Maugeri, a top executive at Italian energy company ENI and author of the 2006 book “The Age of Oil: The Mythology, History, and Future of the World’s Most Controversial Resource”, proposed that the present level of proven crude reserves might expand substantially due to new finds and technologies that allow higher recovery from oil deposits.

Proven crude oil reserves stand today at 1.5 trillion barrels, enough to supply the world for 40 or 50 years, but it is estimated that barely one-third of the reserves can be recovered. However, according to Maugeri, technological advances will mean more than 50 percent of the known oil will be recoverable by 2030.

As new reserves are discovered every year, Maugeri estimates that there will be over four trillion barrels of recoverable oil by 2030, “more than enough” for the entire 21st century.

Brazil, for instance, could add 50 to 80 billion barrels to its 14 billion barrels of proven reserves, as a result of confirmed oil findings in the deep presalt layer in the Atlantic ocean.

The Arctic is a prime example: crude and gas were virtually impossible to extract because of the harsh conditions, but with the melting of polar ice accelerated by climate change, high energy prices and new technology, its energy resources have become more attractive.

The polar region may contain the equivalent of 400 billion barrels of oil, or 10 times the volume of all the crude extracted so far from the North Sea.

“The truth is, there is a lot of interest in continuing to extract crude, and that’s why the situation is not favourable for alternative energies, because oil is still abundant, convenient and cheap – even at current prices, it’s an affordable form of energy for most societies,” said Mijares.

The progressive melting of the Arctic icecap is also opening new shipping routes, handy for transporting the oil. “Russia is avid to relaunch itself as a great world power through the control of reserves, routes and supplies, while it makes the most of the technology provided by the West,” said the Central University of Venezuela’s Ramírez.

Mijares said that “in the era of the former Soviet Union, Russia displayed its power through its nuclear weapons and the Red Army…but now it depends on its energy capacity as the lever to maintain its place as a very important global actor.”

As for the United States, it is probably delighted with the diversification of fossil fuel sources, which reduces its dependence on Middle East oil, so that it can exert greater pressure on the domestic policies of oil-rich countries like Saudi Arabia.

The experts who spoke to IPS also remarked on the emergence of Canada as an energy power and, therefore, as a global player. It has withdrawn from the Kyoto Protocol on climate change, “and is increasing its military spending in order to stand up to the presence of new rivals in the Arctic.”

Meanwhile, further environmental effects are awaited. Scientists like Peter Wadhams of the Scott Polar Research Institute at the University of Cambridge, U.K., have warned how difficult, if not impossible, it would be to deal with a catastrophic oil spill in the Arctic like the one that occurred in the Gulf of Mexico in 2010.

“If there is serious oil spill under ice in the Arctic…it will be very much harder to deal with than a major spill in open water,” Wadhams told the British newspaper The Independent. “The oil is caught underneath the ice, so you can’t get at it immediately to clean it up or burn it off. You don’t know exactly where it is, and then it gets encapsulated in the new ice which grows underneath, so you then have a kind of oil sandwich inside the pack ice.

“And that’s being transported around the Arctic and isn’t released until spring, when it may be several hundred or even a thousand miles from the source of the spill…Once it is released in springtime, it’s very toxic, because the encapsulation in the ice preserves the oil from weathering…Not great for the environment. In fact, I think the appropriate word would be ‘terrible’.”