UNITED NATIONS, Dec 15 2011 (IPS) - In its first-ever official report on the rights of lesbian, gay, bisexual and transgender (LGBT) people, the United Nations confirms there is widespread discrimination based on sexual orientation or gender identity in “all regions” of the world. 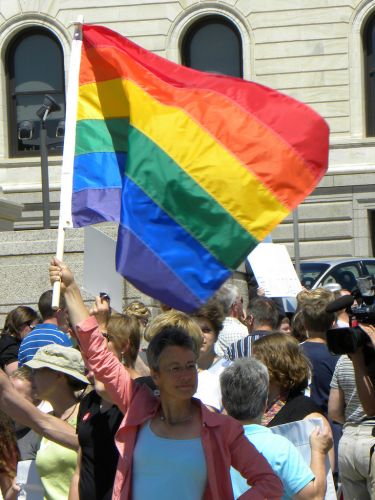 In many cases, asserts the 25-page report released Thursday, “even the perception of homosexuality or transgender identity puts people at risk”.

“Violations include – but are not limited to – killings, rape and physical attacks, torture, arbitrary detention, the denial of rights to assembly, expression and information, and discrimination in employment, health and education.”

The application of international human rights law is guided by principles of universality and non-discrimination enshrined in Article One of the Universal Declaration of Human Rights (UDHR), which states that “all human beings are born free and equal in dignity and rights”.

And so, says the report, all people, including LGBTs, “are entitled to enjoy the protections provided for by international human rights law”.

Authored by the U.N. High Commissioner for Human Rights, Navi Pillay, the report was requested by the Geneva-based Human Rights Council in a resolution, proposed by South Africa and adopted in June this year.

The HRC will discuss the report – and any follow-up action – at its next session in March 2012.

The report is titled “Discriminatory Laws and Practices and Acts of Violence against Individuals based on their Sexual Orientation and Gender Identity”.

Nearly two decades ago, the U.N. Human Rights Committee affirmed that under international human rights law, all states had an obligation to abolish criminal sanctions for homosexuality and stop discriminating based on someone’s sexuality, Charles Radcliffe, chief of the global issues section at the Office of the U.N. High Commissioner for Human Rights (OHCHR), told IPS. In that time, more than 30 countries have decriminalised same-sex sexual relations between consenting adults.

“We’ve seen an historic shift in recent years as more and more countries recognise that LGBT people are at risk and are entitled to adequate protection, particularly when it comes to acts of violence, hate crimes, but also discrimination more generally,” Radcliffe said.

Some 54 countries have enacted laws protecting people from discrimination in the area of employment, while some have amended their constitutions to provide comprehensive protection from discrimination on grounds of sexual orientation and gender identity, Radcliffe noted.

“All of this is coinciding with an ongoing shift in popular attitudes in many countries, in favour of greater tolerance and respect for LGBT people, and a shift too in voting patterns at the United Nations, as an increasing number of states are prepared to join voice in expressing concern at human rights violations against LGBT people,” said Radcliffe.

It is notable, he added, that when the Human Rights Council passed its first resolution on the matter in June this year, the resolution had support from member states in every region of the world.

According to the non-governmental organisation Human Rights Watch, discrimination is still prevalent in countries where, for example, same-sex marriage has been legalised, although to a greater extent in some countries than others.

The first same-sex marriages took place in the Netherlands on April 1, 2001.

Several states in the U.S. have also recognized same-sex marriages.

The new U.N. report also details some of the more positive developments in recent years.

Many member states have instituted training programmes for law enforcement officials to sensitise them to bias-motivated violence against LGBT persons and help them recognise, register and respond to reports of such crimes.

In some countries, including Spain and Honduras, special prosecutors have been appointed to investigate and bring cases to trial.

In South Africa, a national task team on “homophobic and transphobic” hate crimes has been established following consultations with the LGTB community, according to the report.

Some U.N. member states, including Brazil, Ecuador, Germany, the Netherlands and Uruguay, have used the “Yogyakarta Principles” (adopted at a conference in Indonesia in 2006) to help guide policy responses to incidents of violence and discrimination.

While not legally binding, the principles provide guidance to states on LGBT-related human rights issues and legal standards.

In Brazil, the government has supported a public education campaign with the slogan “Brazil Without Homophobia”. In Ireland, an anti-homophobia video shown in schools has been watched by half a million people online, and in the U.S., gay-straight alliances or clubs have been established in over 4,000 high schools, according to the report.

Asked if the OHCHR plans to do a follow-up on the report, Radcliffe told IPS the U.N. human rights office has been working to address homophobic violence and discrimination for some time and will continue to do so.

The High Commissioner, Navi Pillay, speaks out regularly, both publicly and privately, directly taking up her concerns with the governments concerned, he added.

“This report is significant in that it is the first ever official U.N. report on the issue requested by the Human Rights Council or any other U.N. inter-governmental body”.

On the basis of the findings in the report – and the clear pattern of violations it exposes – member states will need to decide what follow up action they want to take, both at an international and national level, Radcliffe noted.