WASHINGTON, Dec 15 2011 (IPS) - When the United States formally ended its eight-and-a-half year military adventure in Iraq on Thursday with a flag-lowering ceremony presided over by Defence Secretary Leon Panetta Baghdad, hardly anyone here seemed to notice, let alone mark the occasion in a special manner. 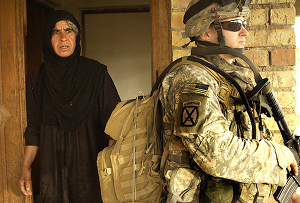 The highly controversial U.S. war in Iraq officially ended on Thursday. Above, a U.S. soldier and Iraqi woman in Al Thobat, Iraq, in 2007. Credit: U.S. Army/ CC by 2.0

The surprising lack of interest could be explained by the distractions of the holiday season, the Republican presidential race or the health of the global and U.S. economies.

It could also be due to the fact that people are all too aware that, even as the last 4,000 U.S. combat troops in Iraq head for home over the next week to ten days, Washington still has more than 90,000 troops engaged in Afghanistan.

That situation, in the public mind, is not all that different than Iraq, particularly because former President George W. Bush depicted them both as part of the “global war on terror”, or, as some of his more extreme neo-conservative cheerleaders described it in their typically apocalyptic hyperbole, “World War IV.”

Or perhaps people here would just as soon forget as a bad dream what the former head of the National Security Agency, the late Lt. Gen. William Odom, called back in 2005 – just two and a half years after the U.S. invasion – “the greatest strategic disaster in United States history”.

The reversal of public opinion

Within days of the March 20, 2003 launch of Washington’s “shock and awe” military campaign, some 70 percent of the public told pollsters they supported the war and thought it was “the right thing to do” against about 25 percent who said the U.S. should have stayed out.

Eight and a half years later, those numbers are virtually reversed: in a poll conducted last month by CNN, 68 percent of respondents said they oppose the U.S. war in Iraq, while only 29 percent said they favour it.

In a CBS New poll also conducted last month, 67 percent of respondents assessed the Iraq war as “not worth the loss of American lives and other costs” incurred. Only 24 percent, including a plurality of Republicans, disagreed – eloquent testimony indeed to the deep disillusionment most citizens feel about a war whose costs its initiators utterly failed to anticipate, let alone prepare for.

On the U.S. side of the ledger, the costs have been staggering: nearly 4,500 soldiers killed, with tens of thousands more wounded, in many ways including severe brain injuries and post-traumatic stress disorders (PTSDs) that haunt and disable their victims for the rest of their lives.

The war’s official price tag of approximately one trillion dollars over the eight years ignores the far greater indirect costs.

Joseph Stiglitz, winner of the Nobel Prize for Economics, has estimated total costs of the Iraq war on the U.S. economy, including the costs of health care for veterans, at more than three trillion dollars, a significant amount given the difficult economic straits in which this country finds itself.

In addition, the U.S. suffered an immeasurable loss in international credibility. The stated justifications for going to war – Saddam Hussein’s ties to Al Qaeda, weapons of mass destruction, a rapidly developing nuclear weapons programme – proved utterly unfounded, while the mightiest, highest-tech war machine in history failed to suppress a variety of rag-tag insurgencies.

Of course, material U.S. losses pale when compared to those of the Iraqis – estimated at well over 100,000 dead, and countless others, including hundreds of thousands of children, injured or traumatised by their experiences.

Nor can the social costs also be ignored: the United Nations has estimated the number of people who have fled their homes since the invasion at nearly five million, roughly equally divided between internally displaced persons (IDPs) within Iraq and refugees who have fled to neighbouring countries, including much of Iraq’s previously thriving Christian community, or beyond.

Moreover, the still-smouldering embers of sectarian violence between the Shi’a-led government forces and militias and their Sunni rivals, as well as unresolved tensions between the Kurdish population in the north and Arabs over territorial claims in and around Kirkuk have not just reconfigured the country’s demography and politics. They also remain largely unresolved and therefore potential sources of major future conflict, even civil war.

The “surge” of an additional 33,000 U.S. troops into Iraq in 2007 and 2008 and the adoption of a counter-insurgency (COIN) strategy helped pull the Sunni-Shi’a conflict back from the brink of all-out civil war.

But it also fell far short of its political goal of bringing about the “national reconciliation” between all of the contending parties that the Surge’s neo-conservative and COIN champions had defined as its strategic goal.

What the remarkably few stories that have reviewed the situation in Iraq during this farewell period appear to agree on is that sectarian tensions are once again on the rise, especially in the wake of sweeping roundups of Sunni leaders associated with the U.S.-backed “awakening” movement that was so critical to the surge’s success.

The apparent fragility of the peace on both the Shi’a-Sunni and Kurdish-Arab fronts and the possibility of renewed civil war – or enhanced Iranian influence – has been the focus of attack by critics of Obama’s decision to withdraw all U.S. combat forces by the end of this month.

Republican Senators John McCain and Lindsay Graham, as well as neo-conservatives, notably Fred Kagan, and other hawks, such as former U.N. Ambassador John Bolton, have complained bitterly over the past week.

They say that Obama failed to follow his commanders’ advice to exert strong pressure on al-Maliki to agree to retain at least 14,000 U.S. troops in Iraq to continue acting as a buffer between Kurds and Arabs in the north, maintain pressure on the government for “national reconciliation”, curb Iranian influence and ensure that threats from a possibly resurgent Al Qaeda in Iraq would be dealt with swiftly.

That plan was rejected when the Iraqis refused to grant any remaining troops legal immunity from Iraqi prosecution.

Scepticism about Iraq’s future stability is remarkably high, according to a NBC News/Wall Street Journal survey released this week. A majority of respondents said they thought “all-out civil war” was either “very” (21 percent) or “somewhat likely” (39 percent) in the wake of the U.S. withdrawal. A similar majority rated the chances of Iraq achieving a “stable democracy” as either “somewhat” (32 percent) or “very unlikely” (28 percent).

Nonetheless, the same pollsters last month found that a whopping 71 percent of respondents believed that Obama’s decision to withdraw all combat troops now was the right decision; only 24 percent disagreed.

It seems that the U.S. public has had enough of the war in Iraq.