U.S.: Protestors Occupy Ports in Oakland and Beyond 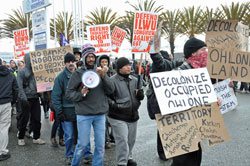 Occupy members shut down the port of Oakland, protesting its control by the "one percent". Credit: Judith Scherr/ IPS

Occupy members shut down the port of Oakland, protesting its control by the "one percent". Credit: Judith Scherr/ IPS

“We shut it down, people, we shut it down,” Anthony Leviege, International Longshore and Warehouse Union (ILWU) member, told the cheering crowd at Oakland’s Berth 55, just before 10 a.m. local time.

“I’m impressed that so many people got up at 5 o’clock in the morning… We can’t stop here.”

About 800 people showed up for the pre-dawn action in near-freezing weather, chanting, “Whose port? Our port!” and holding placards that called for “Solidarity With Longshoremen Against the One Percent” and “Cerremos Wall Street del Puerto”.

The protests, stretching from San Diego to Anchorage, Alaska, aimed at the control of the terminals by those whom the Occupy Movement has dubbed the “one percenters”, especially Goldman Sachs, primary investor in terminal operator SSA Marine.

The port action was just the latest in the tactics of the nimble Occupy Movement that, in Oakland, began with tent camps, twice destroyed by police. Last week it changed course and occupied foreclosed homes and on Monday, it rallied supporters to shut down work at the port.

“What is amazing about this movement is that it refuses to be dismantled,” said activist and retired university professor Angela Davis, speaking at an afternoon rally in downtown Oakland before the second wave of picketers left for the port.

To prevent port workers from on and off loading ships, an arbitrator had to certify the picket line was a health and safety issue for the workers.

Although the determination was made in the morning for both morning and evening shifts, a crowd estimated in the thousands and led by Scott Olson, the young Iraq War veteran hit in the head with a police projectile in Oakland on Nov. 2, marched back to the port in the late afternoon to renew the picket and celebrate victory.

They stayed the night and ended up blocking the 3 a.m. shift at the port, according to KPFA radio.

The decision to shut down the port, however, was controversial both inside and outside the Occupy Movement, even though targeting Goldman Sachs and its role at the port was not in dispute among occupiers.

“Goldman executives can take credit for many of the financial crises of the last decade, including insider trading, fraud, credit default swaps, and subprime mortgages,” wrote Michael Siegel, attorney and Occupy Oakland activist.

Still, most unions sat out the port blockade, neither condemning nor supporting it.

Private maritime businesses in the Port of Oakland “use rent-free public land [that] generates 27 billion dollars annually in trade”, Olson-Jones said. She suggested that taxing them one percent would be enough to pay off Oakland school debt, restore full library services and rehire ever laid off library worker.

While some longshore workers were prominent individually in organising the port shutdown, union leadership opposed it. Much of the controversy centred on a labour dispute between the ILWU and Export Grain Terminal (EGT) in Longview, Washington.

Both the West Coast Occupy movements and the ILWU say that EGT broke a promise to hire ILWU workers, and both want the pledge fulfilled.

Meanwhile, an EGT company spokesman said the company tried to negotiate an agreement with ILWU, but that the union wanted a pension plan that was too expensive, reported the New York Times.

The ILWU’s fight for democracy “is the hard-won right to chart our own course to victory”, he wrote, warning that the union doesn’t want outsiders to adopt the struggle as their own, given the danger that they might do so “in order to advance a broader agenda… destructive to our democratic process and [one that] jeopardises our over two year struggle in Longview”.

Oakland Mayor Jean Quan pleaded with Occupy Oakland not to persist with the shutdown.

“The Port of Oakland is not the home of the one percent,” he wrote. “Rather, it generates over 73,000 jobs in the region and is connected to more than 800,000 jobs across the country. It is one of the best sources of good paying blue-collar jobs left in our city.”

The port commission wrote that the shutdown would “hurt working people and harm our community”. Even some within Occupy Oakland expressed concern that independent truckers would lose a day’s pay. During the morning picket at Berth 55, Alameda County sheriffs tried crossing the picket line twice to take a bus into the port area. Blocked the first time by pickets, sheriffs turned the bus around and returned on foot, using batons to force their way through the picket line and line up between protesters and port property. No one was hurt or arrested.

The second time the sheriffs attempted to drive into the port area, four or five picketers with bicycles stood ground directly before the bus, which soon left the area.

Protests in other cities

From Portland, organiser Tomas Bernal said in a phone interview that the 300-400 protesters there also succeeded in shutting down the port in the morning. “It’s quite historic – with only two and a half weeks to prepare,” he said.

The Portland terminals were also shut down in the evening, Jamie Partridge, another Portland activist, told IPS in an email.

In Longview, where the EGT terminal is located, about 100 protesters arrived at the port’s main entrance. Workers were reportedly sent home due to safety concerns.

But in Vancouver, Long Beach and San Diego, protesters were unable to stop work at the port, while in Seattle police reportedly used flash-bang grenades and pepper-sprayed demonstrators, blocking one of the terminal entrances and arresting 11.

The Seattle Times reported that organisers claimed victory because the workers at two terminals didn’t come to work. The port, however, sent out a press release saying the protest had minimal impact.