CARACAS, Dec 23 2011 (IPS) - These women are not fashion models, nor are they advertising any product, yet their images look down on passersby from giant black-and-white posters in the Venezuelan capital. There are 52 of them, and they are all mothers who have lost one or more children to the criminal violence that is plaguing the country. 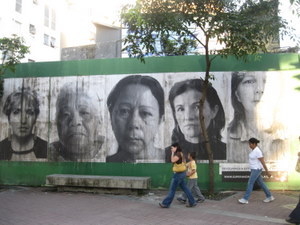 Faces of mothers whose children were killed peer out from walls in Caracas. Credit: Fidel Márquez /IPS

“Youngsters who grew up with my children had to carry guns to be able to go on living in the barrio. Nearly all of them are dead now,” said Rita Hernández, her brown face furrowed with wrinkles. Her sons, 25-year-old Johan and 19-year-old Antonio, were killed in 2004 and 2005.

“I have not moved out of this house, because whenever I cross the threshold I remember the day each one of them was killed,” María Elena Delgado, who lost two sons and a daughter, Erasmo, Wilmer and Norka between 1999 and 2008, told IPS. “I stayed to support the community, so that the same thing would not happen to other youngsters in the barrio.”

Most of the murders occur in the “barrios”, as Venezuela’s poorest neighbourhoods are known. And these areas are home to most of the mothers who lent their images for a social and artistic cause.

Proyecto Esperanza (Project Hope) seeks to call attention to and move people to think about the other victims of violence: the mothers and other family members of the slain. It is headed by two communicators, María Fernanda Pérez and Carolina González.

“We wanted to give faces to the victims of this violence, to which we are so accustomed on a daily basis that our feelings seem to be anaesthetised. We want passersby to take a minute to reflect on the anguish of these mothers, and to see that victims are not just numbers relayed in the press; that’s why we put up the photos,” Pérez told IPS.

A group of photographers took portraits of the 52 mothers, which were printed as posters, mostly 1.80 by 2.40 metres, and some 3.60 by 5.40 metres. Then a couple of dozen volunteers stuck the images on walls with “eco-friendly glue,” a paste of flour, sugar and water.

“Rather than an accusation, it is a cry for peace. It is not just complaining about the anguish, but a demonstration that there is also hope that justice will be done, and ways will be found so that every day, more and more lives can be saved from the violence,” Pérez said.

In this South American country of 29 million people, there are 13,000 to 14,000 murders a year, and an additional 8,000 violent deaths for resisting authority or that are still under investigation, bringing the violent death rate to over 70 per 100,000 population per year, according to the human rights organisation PROVEA.

The official homicide rate of 48 per 100,000 population per year is one of the highest in the world, comparable to those of El Salvador, Honduras and Jamaica in the Americas, and Côte d’Ivoire and Swaziland in Africa, according to the United Nations Office on Drugs and Crime (UNODC).

Caracas, with a homicide rate of 122 per 100,000 population according to UNODC, is by far the most violent capital city in South America.

“Living like this is a nightmare,” said Bebeka Pichardo, whose 24-year-old son Taner was murdered in 2010. “When they kill one of our children, they are branding us like cattle. You wake up, see the sun and feel absolutely indifferent – the sun is indifferent to your grief, and it shows you that life goes on even though you feel dead. The sun does not care about you, it keeps on shining.”

“Although over 90 percent of the victims are men, most of them young, it is women who take the pursuit of justice upon themselves,” said Liliana Ortega, head of the Committee of Victims’ Relatives (COFAVIC) which was formed after the deaths of hundreds of people during the week of protests, looting and repression in 1989 known as the “Caracazo”.

Ortega draws a parallel with other causes that had very little visibility until women, and especially mothers, assumed the challenge of going out on the streets to confront society with the issue, like the Mothers and Grandmothers of the Plaza de Mayo in Argentina, or the Women in White in Cuba, she told IPS.

In Venezuela, “women are the ones who are trying to seek justice, but they suffer from revictimisation: because of the cause they espouse, they are often not only ignored, but actively threatened, harassed, and sometimes mistreated or even criminalised,” she said.

Writer Alberto Barrera praised the project’s work because “suddenly, human experience comes to the fore, and it is even capable of turning anguish into art, absence into solidarity. Victims are transformed into images of faith for the future.”

The faces of the 52 mothers “are not here to reproach us for the loneliness the bullets forced on them, but to invite us to think and to build peace,” said Barrera.

Project Hope was supported and encouraged by Inside Out, a global participatory photography movement led by a French artist who identifies himself only as “JR”. Over the past decade Inside Out has made an impact on different cities, using photographs as huge as they are unusual in conflict environments.

Among its actions were placing photographs of Palestinians and Israelis looking at each other in cities in both Israel and Palestine, and of women living in the dangerous Morro da Providencia “favela” or shanty town in Rio de Janeiro, Brazil.

Another series, “Women Are Heroes”, was displayed on a train in Kenya; elder citizens were portrayed on walls in the Colombian city of Cartagena; and people smiling or making faces were splashed around Ciudad Juárez, the Mexican city on the border with the United States that is plagued by violence and in particular, femicides (gender-based murders of women).

The results are far from immediate. The weekend after the Nov. 19 debut of the 52 photographs was the bloodiest of the year in Caracas, with 70 violent deaths in the metropolitan area, and the authorities have not even mentioned Project Hope’s photographic display.

However, Pérez said that many other mothers and relatives of victims have called the project to offer their walls for displaying more photographs, to contribute their testimonies to a book in progress on this experience, or to request that Project Hope be replicated in other Venezuelan cities.

“Achieving peace does not require only very big or very difficult efforts, but many small efforts in different spheres,” Pérez said.