CUBA: Pope to Visit a Country in Flux

HAVANA, Jan 2 2012 (IPS) - On his upcoming visit to Cuba, Pope Benedict XVI will find a country immersed in dramatic changes, as it “modernises” its socialist system and continues to open up to religion, marking a difference from the society found by John Paul II when he visited almost 14 years ago. 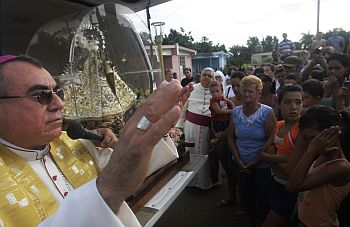 According to the schedule that was released on Sunday by the Catholic Church, the Pope will begin his three-day visit in the eastern city of Santiago de Cuba, where he will arrive on Mar. 26 from Mexico and will be officially welcomed by President Raúl Castro and the island’s religious authorities.

In Santiago, 861 kilometres east of the capital, the Pope will celebrate mass in Antonio Maceo Revolution Square and stay overnight at the El Cobre rectory. The next day he will visit the sanctuary of Our Lady of Charity to pray before the statue found floating on a board in the ocean 400 years ago.

At midday on the 27th, the Pope will continue his official visit in Havana, where he will meet with Castro, who in 2010 promoted channels of dialogue with the ecclesiastical hierarchy that eased internal and external tensions. In Castro’s opinion, the talks strengthened “the unity of the nation.”

On the morning of the 28th, the Pope will say mass in José Martí Revolution Square, which on Jan. 25, 1998 was the site of a massive liturgy presided over by John Paul II (1978-2005), with former President Fidel Castro in a front row seat.

The local Church released the papal agenda, coordinated by the Cuban Conference of Catholic Bishops and Cuban authorities after the conclusion in Havana on Friday of a national tour of the statue of Our Lady of Charity of El Cobre, part of the festivities marking the 400th anniversary of its discovery.

The 16-month, 28,000-kilometre pilgrimage, which included visits to hospitals, senior citizens’ homes, cultural institutions and even prisons, ended with an open-air mass alongside Havana Bay, celebrated by Cardinal Jaime Ortega. The ceremony was broadcast later the same day on state television.

In his homily, Ortega, who is archbishop of Havana, asked the Virgin to intercede on behalf of those who have “government responsibilities in the country, so that they can continue advancing without mishap in those necessary changes to economic and social life for which the Cuban people are waiting.”

It was an explicit reference to the changes approved by the Sixth Congress of the ruling Communist Party of Cuba to “update” the country’s economic system, a process that some believe is overly slow and timid. Castro has said that efforts would continue “without hurry or improvisation.”

The most far-reaching change is a major reduction in inflated state-sector payrolls, which began in 2010 with the ultimate goal of reducing public sector employment by more than one million jobs, in this country of 11.2 million people.

To that end, the number of private activities in which self-employment is allowed was expanded to 178, and rules easing the tax burden were created, to encourage more people to strike out on their own.

Ortega acknowledged that authorities had respected the “right” of the Church to look after the welfare of the people. “One example of this has been the willingness and support offered by authorities for carrying out the pilgrimage of the statue of the Our Lady of Charity of El Cobre,” he said.

The 400th anniversary celebration of the discovery of the statue of Cuba’s “mother” and patron saint culminates in a Jubilee Year in 2012, organised in all of the country’s dioceses. During that time, many pilgrims from around the nation and the world are expected to visit the El Cobre sanctuary.

In the El Cobre basilica, about 12 kilometres from the city of Santiago, the original statue of the Virgin is on public display. It was found in 1612 by two brothers, Juan and Diego de Hoyos, and a free black man, Juan. According to the legend, the statue was floating on a plank inscribed with the words “I am Our Lady of Charity”.

In his remarks, Ortega noted that John Paul II crowned her as “Queen and patron saint of all Cuban people during his historic visit” to Cuba, and that the Cuban president had marked the 400th anniversary by granting a pardon to almost 3,000 prisoners, “almost all of whom were able to go home for Christmas.”

Ortega and Castro held unprecedented talks in mid-2010, with the most visible results being the release of some 130 prisoners, including the remaining 52 of the group of 75 dissidents sentenced in 2003 who were still incarcerated. Most of the released political prisoners went into exile to Spain and other countries with their families.

In referring to the issue during his central report to the Sixth Congress of the Communist Party last April, Castro said the releases occurred “in the context of a dialogue of mutual respect, loyalty and transparency,” with viewpoints that did not always concur, but were constructive.

“With this action, we have favoured the consolidation of the most precious legacy of our history and of the revolutionary process: the unity of the nation,” he said. According to analysts, reflecting this dialogue and rapprochement in the party’s central document was an endorsement of the policy to be followed in relations with the Catholic Church.

In addition, combating prejudice against religious beliefs, along with discrimination based on race, gender, sexual orientation or other grounds that can be used to limit the exercise of people’s rights – such as holding public office – are among the issues to be discussed at the party’s national conference, set for late January.

Relations between the Catholic Church and the Cuban state were extremely troubled in the initial decades following the 1959 revolution, but John Paul II’s visit marked the first stage of mutual understanding. Benedict XVI’s visit is also expected to strengthen the rapprochement and expand the space gained by the Catholic Church.