DAKAR, Jan 5 2012 (IPS) - Amadou* takes in a long, deep breath, clears his throat and steps to the front of the room. He turns to look out at a familiar group of faces sitting on long wooden benches here at the Camp Penal maximum-security prison in Dakar. This is the last in a group of 150 inmates Amadou has been speaking with today. He’s tired, but remains focused. 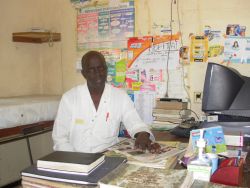 Alassane Balde, the chief of medical staff at Camp Penal, says condoms will not be distributed to the inmates. Credit: Amanda Fortier

“I know your realities,” he begins, in his native Wolof. “I’ve slept on the same mattresses as you, eaten the same food, and showered in the same bathrooms. Today I’m here to talk to you about AIDS. What it is, how we catch it and how to prevent it.”

The prisoners are sitting up attentively. Some are smiling and look relaxed. Others have a more serious gaze, stroking their beards and twirling prayer beads round in their fingers repeatedly. For a majority of them, Amadou isn’t a stranger. Less than three years ago, he was here, living among the over 800 prisoners, serving a two-month stint.

Amadou was arrested in December 2008, along with eight other men, for allegedly “engaging in homosexual acts” – a serious crime in this majority-Muslim country. He was sentenced to eight years in prison, but the case was later overthrown when international aid groups intervened.

Senegal has among the lowest rates of HIV in Sub-Saharan Africa, at less than one percent. But the most vulnerable group is men who have sex with men (MSM), nearly 22 percent of whom are HIV-positive.

Prisons are high-risk environments for the transmission of the disease, due to the prevalence of hard drugs, violence and sexual relations. There is no mandatory testing in prison, and for those prisoners who, either knowingly or unknowingly, are living with HIV, the stresses of living in prison – including overcrowding, unsanitary conditions, and poor nutrition – mean their health is even more compromised.

Cyrille* is an HIV-positive inmate from Cameroon who is serving a two-year sentence at Camp Penal for theft. He found out he contracted the disease six years ago, when he was hospitalised for a blood clot in his leg.

Every month he goes to the Centre de Traitement Ambulatoire in Dakar for anti-retroviral treatment, which is financed by the Senegalese government. He says he is very worried about his health, because he knows of three AIDS patients who have already died, and his own doctor tells him he needs to improve his diet.

Alassane Balde, the chief of medical staff at Camp Penal, says all the inmates receive three meals a day, but many prefer to eat food brought in by family members. But foreigners who are here without family, like Cyrille, do not have this luxury and end up eating an unvaried diet of bread, butter, rice and fish, with few fruits and vegetables or dairy products.

When asked about implementing harm-reduction strategies in the prison, through either a needle exchange programme or condom distribution, Balde remains adamantly opposed. He says they do not have problems with hard drugs, and a condom distribution programme would simply not be tolerated.

“Our religion doesn’t permit this,” Balde says. “We are Muslims, and as Muslims we don’t like seeing that. There is no tolerance for this type of behaviour. It’s a taboo subject, and we don’t even talk about it.”

But Amadou points out that this is a dangerous assumption, because sex between men in prison is a reality, even though people continue to turn a blind eye.

“Everyone knows, whether we admit it or not, that there are sexual relations among men in prisons,” Amadou explains after the conference, from his home in Dakar. Since his arrest and the barrage of media attention that ensued, Amadou and his partner Cheikh* have been forced to move more than seven times, after landlords discovered their identities.

Brendan Hanlon is the chief executive at AVERT, an aids charity based in the UK. He says there is little doubt that HIV rates among prisoners are higher than among the general population.

“There is a lack of HIV prevention programmes, because authorities fear condom or needle distribution will encourage drug use or sexual activity. But the truth is, people will do these things regardless,” Hanlon says.

According to Hanlon, a study involving 500 inmates in an Ivory Coast prison found an HIV rate of 28 percent – double the rate of the general population. And in South Africa – the country with the highest number of people living with HIV in the world, at 5.6 million – between 40 and 45 percent of prisoners are HIV-positive. While no statistics are available for Senegal’s prisons, Hanlon believes the rates here would also be higher.

After Amadou finishes his talk at the prison, he asks if there are any questions. A few seconds go by before hands start to spring up. They want to know if they can catch AIDS from sharing tea, going to the barber, whether their baby will have HIV if they do, and how they know when someone is sick.

“Can I get tested right now?” asks one of the younger inmates openly. Others nod in agreement. Amadou looks satisfied.

“If MSM are promoting these types of prevention activities for the health of the whole community, they must be saluted and encouraged,” he says. “This work is not for ourselves, but for everyone. But how many people dare to send out that message? Because this is really what we need.”

A large-scale voluntary testing programme at the prison is expected to start in the coming months. Meanwhile Amadou and his AIDS-awareness organisation will continue to speak at other prisons throughout the country.

* Not his real name. Published under an agreement with Street News Service.