GUATEMALA: For the Maya, the World Isn’t Ending – the Environment Is

GUATEMALA CITY , Jan 13 2012 (IPS) - The end of the Maya long-count calendar does not predict a global catastrophe, let alone the end of the world, say native activists and elders who spoke to IPS in Guatemala. But what are coming to an end are the world’s natural resources, as a result of human activity, they warn. 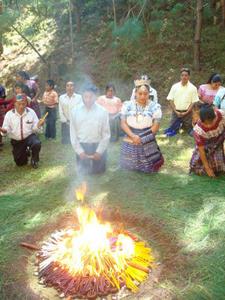 Participants in a Maya ceremony. Credit: Courtesy of RENOH

But the end of a cycle does not mean the end of the world, and the collective hysteria triggered by the supposed 2012 Maya doomsday prediction does not at all reflect the thinking of today’s Maya Indians in Guatemala.

“There are leaders who let themselves be carried away by what they hear, or because ’13’ has very strong energy and they are worried that a catastrophe will happen, but none of that is true,” said Antonio Mendoza, an activist with Oxlajuj Ajpop, a local NGO whose name in the Maya Quiché language refers to the 13 forces represented by the Maya calendar.

On the contrary, he said, “this new stage is extremely important for reflection and analysis about human coexistence and nature,” he told IPS.

According to historians, the grand cycle began on Aug. 11, 3,114 BC, and ends on Dec. 21 this year, which marks the winter solstice – and the start of a new long-count cycle.

“What does cause us a great deal of concern is how to bring people together in the effort to refocus our behaviour with respect to nature, global warming and the neoliberal policies that only extract oil and minerals and install large factories, posing a serious threat to humanity,” Mendoza said.

Maya organisations in Guatemala have planned a series of activities this year, including seminars and gatherings to discuss opportunities for development for indigenous people.

“The idea is to come together in unity and solidarity and salvage the valuable (Maya) knowledge about nature and Mother Earth,” Mendoza said.

The ancient Maya civilisation was initially established around 2000 BC in present-day southern Mexico, Guatemala, western Belize and northwestern Honduras. It flourished until about 900 AD, which marked the start of the post-classic Maya period that ended with the Spanish conquest.

At the height of the Maya culture, during the classic period – 250 to 900 AD – it was one of the most advanced civilisations in the world, noted for its architecture and city planning, sophisticated mathematics, accurate astronomical calculations and hieroglyphic writing system.

The Maya made lasting contributions in art, literature and science. Their modern-day descendants have their own languages, traditions and customs, and the majestic archaeological sites in the areas where they live draw a steady influx of tourists and academics.

According to official statistics, indigenous people comprise close to 40 percent of Guatemala’s population of 14 million, although native organisations put the figure at over 60 percent.

Mario Molina of the national network of Maya youth organisations, RENOJ, told IPS that Dec. 21 “will not mark the end of the Maya or the world, but will be a moment to assess the progress made in the development of nature and humanity.”

The activist expressed concern over the deterioration of the environment that is occurring worldwide, and global warming caused by human activities, which “is one of the fundamental issues to be discussed.”

“This is also a good time to build a unified multicultural country with a shared vision,” one of the long-standing aims of the historically marginalised indigenous people of Guatemala.

Extreme poverty and the lack of basic services like water, electricity, education and healthcare are pressing problems in the indigenous areas of Guatemala. In this Central American country, 54 percent of the population is poor and 13 percent lives in extreme poverty, according to the 2011 National Survey on Living Conditions.

Molina complained about the racism suffered by the Maya population, which is reflected in their low level of political participation and high poverty rates. He said they would take advantage of the end of the Maya calendar cycle to promote actions “in search of respect for dignity, life and human rights.”

Some see the change in the Maya calendar as presenting other opportunities. For example, the government tourism institute launched the “Dawn of the Maya” campaign to celebrate the end of baktun 13 and use it as a hook to draw tourists interested in the Maya culture and archaeological sites.

Maya elder Alejandro Cirilo Pérez, spiritual adviser to outgoing President Álvaro Colom – whose term ends Saturday Jan. 14 – told IPS that “This isn’t the end of the world. What has happened is that phenomena like earthquakes, tidal waves, tornados and disease have been aggravated by the enormous pollution caused by man.”

The idea that the world is going to end in December 2012 has spawned books, blogs, TV programmes and movies, as well as outlandish projects in different parts of the world, like underground survival shelters.

But the spiritual guide said “The Maya calendar is something that only the Maya understand, although academics, archaeologists, anthropologists and historians have written so many books about it, without understanding it.”

Pérez said the true Maya literature was burned by Diego de Landa, a Spanish bishop of the Roman Catholic archdiocese of Yucatan in Mexico (1524-1579), who considered the Maya codices “superstition and lies of the devil.”

De Landa was one of the first Franciscan friars to reach the Yucatan peninsula, where he tried for years to evangelise the native Maya population, in the face of great resistance. In a 1562 public ceremony called an auto-da-fé, he burned scores of Maya codices and sculptures.