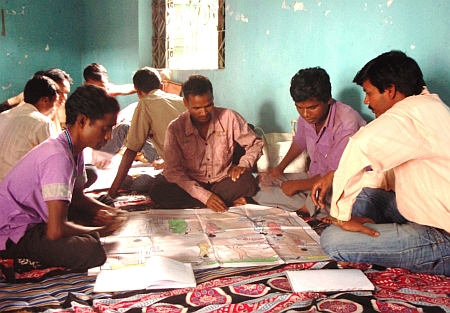 Credit for the safe deliveries goes to Malay Ranjan Juanga, a ‘male health activist’ (MHA) entrusted with mother and child health in his community of 94 households in Nola.

Set eight km away from the main road, Nola and is best reached by trekking up the treacherous slope of Chandragiri. Four-wheelers balk at the rain-eroded roads and bicycles fare little better.

Yet, tribal mothers Rasamali Juanga, Chinu Mahakud and Kuiri Juanga, could deliver their babies at the government-run community health centre at Harichandanpur, 30 km away, thanks to support from the MHA.

Odisha is one of India’s least developed provinces and almost 40 percent of its 20.7 million people are indigenous or belong to extremely marginalised Hindu castes that live in remote hamlets or inaccessible areas.

In Odisha more than 258 women die each year for every 100,000 deliveries, while 65 infants die in every 1,000 live births, according to the latest Sample Registration System (SRS) – India’s largest demographic sample survey, covering 1.4 million households and a population of 7.01 million, during the period 2007-2009.

“The government of India has identified an essential package of interventions that are known to save lives of mothers, infants and children,” says project director Patricia Dandonoli, from Concern Worldwide’s New York headquarters.

To help get closer to United Nations’ millennium development goals (MDG) 4 and 5, to reduce child and maternal mortality respectively, Concern Worldwide launched an initiative called ‘Innovations’ in Odisha (and also in Malawi and Sierra Leone) to generate fresh ideas and out-of-the-box thinking in finding healthcare solutions.

One idea that came up was a role for MHAs to support the existing cadre of female accredited social health aActivists (ASHAs) in mother and childcare.

“Through Innovations’ unique and exciting project we reached out to the people of Odisha to understand problems better and to seek their ideas and solutions to these problems,” says Robert Mulhall, Concern Worldwide’s Bhubaneswar-based country manager.

In February 2011, the project implemented in Keonjhar district, brought 205 MHAs into the healthcare sector in Odisha.

These MHAs were paired with ASHAs who already formed the cornerstone of the Indian government’s National Rural Health Mission (NRHM)’s strategy to address mother and child-related MDGs.

Under NRHM, one ASHA is identified per 1,000 rural population to help the community through awareness building and increased utilisation of existing health services, with emphasis on increasing institutional childbirths.

However, in remote areas like Nola, security is a real concern for female ASHAs who are expected to be on call even at night to attend to women in labour and move them to distant health facilities.

In Melani village, MHA Singari Munda is already helping in this respect. When Rashmita Murmu went into labour after midnight and hospital transport was unavailable, Munda walked a kilometre before finding a vehicle to move her to a health facility 15 km away.

When Rashmita became complicated, Munda transferred her to a better equipped district health centre in Keonjhar town, stayed by her side for seven days, and returned mother and child home, safely.

In a patriarchal society, ASHAs face challenges in engaging with menfolk on pregnancy and family planning issues. According to the state health and family welfare department, in 2011, Odisha’s male-to-female sterilisation ratio was a highly skewed 1:44.

“Family planning and mother and childcare advocacy have become lopsided, too mother-targeted, and not bringing desired attitudinal change because young mothers are not the decision makers,” says Dharitri Rout, secretary of the non-profit Women’s Organisation for Socio-Cultural Awareness, Innovations partner in Keonjhar district.

“While the men decide the number of children, they think they have no role to play in women’s nutrition during pregnancy and lactation,” Rout rues.

“Now, with MHAs accompanying the ASHAs on door-to-door rounds, the husbands come out and participate in information sharing and are no longer barriers to healthcare-seeking behaviour,” says Rout.

Says Singari Munda, an MHA in the 298-family Melani village: “Already, a village committee of married men now meets monthly to discuss family planning and vaccination – though attendance was thin in the beginning.”

“The ASHA cadre is overburdened since the responsibility for many primary health programmes converge on these grassroots health workers,” observes Raj Kumar Ghosh, a senior government health official.

After Puspanjali Nayak, 22, ASHA in Bhandaridihi village, had to cut down her home visits after she became pregnant, MHA Ramesh Mohanta stepped in to help.

When Santi Munda, a villager, had to be moved to a government facility, and no transport was available in Bhandaridihi, Mohanta rushed her on his motorcycle to a private hospital in Joda town, 40 km away.

“What we learn from testing these creative solutions will be shared with the government and other stakeholders,” says Dandonoli.

Dr. Ashish Kumar Sen, health specialist with the United Nations Childrens Fund in Odisha, suggests “training the MHAs for a broader role, since the state is woefully short of health personnel.”