TEHRAN, Jan 13 2012 (IPS) - Massive uncertainty, severe sanctions on its economy and a diminishing supply of hard currency have sent the Iranian currency, the rial, into a tailspin that appears unlikely to stabilise anytime soon. 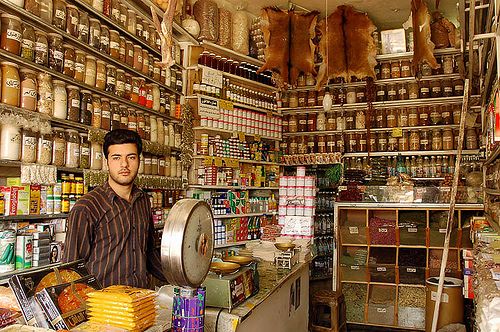 A spice shop in Tehran. Credit: kamshots/CC BY 2.0

Currently the most often heard phrase in Tehran is “how much is the dollar?” The value of the U.S. dollar has become the barometre by which everything is measured, and as the price of a single dollar hovers around 17,000, the Iranians are feeling the pressures of their currency’s worst state ever.

Local journalist Mohammad quipped recently, “We used to talk about how 70 rials bought you a U.S. dollar” – a popular statistic from the days before Iran became an Islamic Republic in 1979 – “now we’re nostalgic for 15,000-rial dollars.”

The issue of Iran’s foreign exchange rates has become so sensitive in recent days that Farsi language websites posting updated exchange rates have all been filtered, making them inaccessible to web surfers who do not have anti-filtering software or access to a VPN. Text messages containing the word “dollar” written in Farsi were also reportedly blocked for several days.

Many official exchange shops have not been opening for business in the current climate as they were told by government authorities to post rates of approximately 14,000 rials per U.S dollar. Indeed, these rates can be seen on boards throughout the city, but as one exchange shop worker told IPS, “Good luck buying them at those rates. You won’t find a single shop in the country selling them for the posted rates.”

This has placed even greater scrutiny on Iran’s epicentre of unregulated currency trade in downtown Tehran. On Jan. 8, parliament voted to criminalise the unlicensed trade of foreign currency. So far, though, transactions on street corners throughout southern Tehran are continuing as usual.

Having lost over 30 percent of its value against the dollar since September, the purchasing power of the rial, and consequently that of average Iranians, has dwindled.

Changes in the rates used to be gradual and based on easier to define indicators such as the price of oil, ups and downs on Wall Street, or even in Tehran’s own stock exchange. But the new atmosphere defies those usual parametres and seems to be more influenced by rumour, paranoia and manipulation of how much foreign currency is made available from one day to the next, fueling big swings in the price at any given moment.

In Tehran, the results of sanctions along with the slide of the rial have sent shockwaves through a society that has long considered mercantilism essential to its identity. Here transaction is an essential component of life and stripping Iranians of their ability to do so has created growing resentment.

The uncertainty in the currency may have resulted in a lack of confidence in it, but has yet to reduce consumption. People are still buying goods as there is a sense that the rial could go much lower. Furthermore, there no real shortages to be reported yet, as the smuggling ships that have fueled Iran’s gray market economy for decades are still sailing the waters of the Persian Gulf, unloading on Iranian soil.

Prices on most goods, however, are creeping up quickly. As most products available at grocery stores are imported, prices have steadily risen in recent weeks. One example is bottled water, up 25 percent since September. Another is eggs, which now cost approximately 4,000 rials each throughout Tehran.

For higher priced imports, especially electronics, prices are regularly being quoted by the day rate of the euro or the dollar. On popular products, especially brands like Apple, which only arrive in Iran via smuggling, prices are attached to foreign currency since they have to purchase those products in dollars or euros. An Iphone 4S that cost around 11,500,000 rial in December now costs 15,500,000 – still somewhere between 850-900 dollars when the fluctuation in currency is considered.

In the real estate market, more short-term speculation for an economy that already rewarded a get rich quick mentality has resulted in abnormal windfalls for those in the business of buying and selling property.

A proposed loosening of the regulations on the number of stories a new building can reach have sent real estate prices soaring as land speculation and development is still seen as more stable than bank deposits. Iranian banks offer abnormally high interest rates, but even in double digits, they cannot keep up with the rate of inflation.

Not surprisingly, a good portion of the blame is being pinned on the U.S., by the Iranian government as well as the public.

In a growing sign that the U.S. is losing the battle for the hearts and minds of Iranians, Hassan, a 35-year-old travel agency owner, told IPS this week, “I never had a bad word to say about Obama until he signed these new sanctions. I’m so angry with him. Many people here feel the same way.”

His travel agency now quotes all of its prices in dollars or in euros. “We don’t have any other choice,” he said, “we have to pay for tickets and hotels in dollar and with the fluctuation in the rial, I can’t reliably price things anymore.”

The tourism industry, which has seen rapid growth over the past several years, is one of many that is bracing for even more difficult times ahead. As the Iranian New Year holiday quickly approaches, the currency decline could have a massive effect on his ability to sell tours to Iranians who look forward to the annual break from their tense lives inside Iran.

With 100,000 Iranians traveling during the two-week March holiday, there is the looming specter of a major flight of capital. Citizens had been entitled to an annual one-time purchase of up to 2,000 dollars at a lower official rate. Last week that amount was reduced to 1,000 dollars per traveler and the rate was significantly altered from 10,800 rials per dollar to 13,630 as of Monday.

Despite these measures, the Iranian government has denied that sanctions have played a role in the current rial crisis. On Tuesday, the speaker of Iran’s Foreign Ministry, Rahmin Mehmanparast said, “the decline in the value of Iran’s rial against the dollar has nothing to do with the new sanctions instituted by the U.S. on Iran’s central bank.”

The central bank’s governor, Mahmoud Bahmani, offered an almost identical statement, but added that the reasons for the decline were mainly psychological and inflicted on Iran by its enemies.

While there might not be a single source of the market’s uneasiness, Iran researcher Kevan Harris of Johns Hopkins University agrees that the causes are difficult to measure.

“This is where psychology is more important than economics,” according to Harris, who added, “because there’s no functioning currency market in the traditional sense, the swings in prices become much wider.”