WASHINGTON, Jan 25 2012 (IPS) - The Pakistani military leadership’s response to the U.S. report on its helicopter attack on two Pakistani border posts Nov. 26 assailed the credibility of the investigation by Air Force Brig. Gen. Steven Clark and expressed doubt that the attack could have been “accidental”. 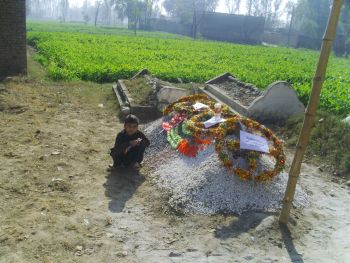 The long-expected rejoinder, made public Monday, charged that 28 of its soldiers at two border bases were killed one by one long after the U.S. military had been told about the attack on a Pakistani base.

The Pakistani critique questions the claims that the U.S. did not know about the Pakistani border posts, that the combined U.S.-Afghan Special Forces unit believed it was under attack from insurgents when it called in air strikes against the two border posts, and that a series of miscommunications prevented higher echelons from stopping the attacks on the border posts.

Revelations in the Clark report – as well as what it omits – support the Pakistani contention that the U.S. investigation covered up what actually occurred before and during the attack. Information in the report suggests that the planners of the Special Forces operation the night of Nov. 25-26 may have known about the two Pakistani border posts that were attacked while feigning ignorance to the commander who had to approve the operation.

It also portrays a military organisation that was not really interested in stopping the attack on the border posts even after it had been told that Pakistani military positions were under fire.

The Pakistani analysis does not repeat the assertion made by Gen. Ashfaq Nadeem, the director general for operations, in the aftermath of the attack that the coordinates of the two Pakistani border posts had been given to the U.S. military well before the incident of Nov. 25-26.

The analysis leaves no doubt, however, that the Pakistani military believed the United States was well aware of the two posts. It said each of the posts had five or six bunkers built above ground on the top of a ridge and clearly visible from Maya village about 1.5 kilometres away.

The Pakistani critique asserts that two or three U.S. aircraft had been operating in the area daily, and that U.S. intelligence had questioned Pakistani officials in the past even about changes in weaponry in its border posts.

The Pakistani military document highlights the revelation in the Clark report that Maj. Gen. James Laster, the commander of the “battlespace” in which Operation SAYAQA was to take place, had demanded that the planners of the operation “confirm the location of Pakistan’s border checkpoints”.

The most recent map of Pakistani border positions available at the time, according to the Clark report, was dated February 2011. The obvious intent of the demand by Gen. Laster was that the planners find out if there were any new border checkpoints that needed to be added to update the map.

That intelligence was obviously relevant to Gen. Laster’s order, but those border posts did not show up on the map produced Nov. 23. The planners had decided not to check on those “possible border posts” by asking a Pakistani border liaison officer or investigating unilaterally.

The Clark report tiptoes carefully around the implications of that fact, saying the operation’s planners “did not identify any known border posts in the area of Operational SAYAQA”.

The point of requiring confirmation of a new map would presumably have been to go beyond border posts that were on the available map.

Air crews planning for the operation also knew about the “possible border posts”, according to the report, but didn’t include them in their “pre-mission planning packages”, because “they were data points outside the Operation SAYAQA area.”

U.S. investigators showed no apparent curiosity about what appears to have been the deliberate exclusion of the two new border posts from the map given to Gen. Laster.

The Pakistani critique charges that it is “not possible” that the failure to check on the Pakistani posts was “an innocent omission”.

A second point made by the Pakistani military is that the U.S. attack on its “Volcano” base by U.S. helicopter gunships continued for “as long as one hour and 24 minutes” after the U.S. side had been informed of the attack on its post.

Despite the fact that U.S. and ISAF officials had already been informed about the assault on the Pakistani bases “at multiple levels by the Pakistan side”, the Pakistani analysis charges, “every soldier in and around the posts…was individually targeted.”

The Clark report’s account of U.S. responses to being informed by Pakistani officials that their bases were under attack does nothing to allay Pakistani suspicions about the claim that the attack was unintentional.

It confirms the earlier Pakistani claim that its border liaison officer at the ISAF Regional Command East (RC-E) had informed the U.S. officers in charge of “deconfliction” with Pakistani positions on the border minutes after the attack had begun at 23:40 hours that Pakistani Frontier Force soldiers were being “engaged” by U.S.- coalition forces coming from Afghanistan.

The exchange over the news from the Pakistani officer was testy. Gen. Clark recalled in his press briefing on the report Dec. 22 that the Pakistani liaison officer had been asked where the border posts were located, and had not given the coordinates, but had responded, “Well, you know where it is because you’re shooting at them.”

Clark suggested that there was “confusion” about where the attack was taking place, but there was only one place where U.S. forces were firing at positions inside Pakistan that night, and RC-E’s border confliction cell could have easily identified that place quickly enough with one or two calls.

Neither the text of the report nor the detailed timeline in an annex show any effort to contact the Special Forces Task Force or Task Force BRONCO, which had approved the operation, about the report that they were attacking Pakistani border posts. The report offers no explanation for the absence of any action on that report, saying only that it “could not be immediately confirmed”.

Twenty minutes before the information had arrived, according to the Clark report, Task Force BRONCO told the Special Operations Task Force in the region it was still waiting to get confirmation from the Border Coordination Center for the area that there were no Pakistani troops near the operation. It added that RC-E was not tracking any PAKMIL border posts on its computerised map of the area.

The Special Operations Task Force then then sent out a message system saying, “PAKMIL has been notified and confirmed no positions in area.”

In yet another suspicious episode, instead of asking the Pakistani liaison to the border coordination commission whether Pakistan had any posts or troops in the area of Operation SAYAQA, RC-E give him a general location that was 14 kilometres away from that area and asked if Pakistan had troops nearby.

The misdirection of the Pakistani liaison officer, which ensured the response that there were no Pakistani troops in the area, is explained in the Clark report as having been caused by a “misconfigured electronic map overlay”.

Asked in his press briefing why the RC-E had refused to provide precise grid coordinates under circumstances in which it was supposed to be determining whether U.S. forces were firing at Pakistani forces, Clark cited “the overarching lack of trust”.

Nearly 40 minutes after the attack on border post “Volcano” began, according to a timeline in the report, the U.S. Liaison officer to Pakistan’s 11th Corps reported to the Special Operations Task Force that U.S. helicopters and a drone had been firing on a Pakistani military post.

But the Task Force waited for at least 10 more minutes, according to the timeline, before informing the Special Forces Unit.

Meanwhile Pakistani troops were being hunted down one by one.