NAIROBI, Feb 29 2012 (IPS) - Each day after school, nine-year-old Nelly Wangui hurries home with a bundle of firewood balanced on her head. The paper bag in which she carries her schoolbooks sits precariously on top of the stack and every now and then she reaches out to ensure that her books have not fallen down. 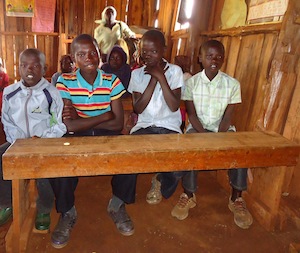 In Kenya's urban slums the lives of many children remain a continuous fight for survival. Credit: Miriam Gathigah/IPS

Although Wangui’s story sounds typical of poor children in rural areas, she in fact lives in the country’s capital city, Nairobi. And her life is much like that of the thousands of other children in the sprawling Korogocho slum and others like it in this East African nation.

While children in urban areas are more likely to survive infancy and live beyond their fifth birthday since they enjoy better nutrition, health and education, compared to their rural counterparts, this is not true for children in urban slums.

In Korogocho alone government statistics estimate that 200,000 people live in crowded conditions, plagued by extreme poverty and an absence of basic services. Here, the lives of many children remain a continuous fight for survival.

“As experiences of childhood become increasingly urban, so are the experiences of extreme deprivation and a continuous fight for survival for children living in urban slums,” says Dr. Ken Onyango, a paediatrician in Nairobi who often volunteers his services to slum areas around the city.

According to the United Nations Children’s Fund (UNICEF) report The State of the World’s Children 2012: Children in an Urban World, released on Feb. 28, an increasing number of children living in urban slums are among the most disadvantaged and vulnerable in the world.

As the world becomes increasingly urban with over half of its people living in urban areas, including more than a billion children, the urban experience is one of poverty and exclusion for many.

“When we think of poverty, the image that traditionally comes to mind is that of a child in a rural village,” said UNICEF Executive Director Anthony Lake in a statement. “But today, an increasing number of children living in slums and shantytowns are among the most disadvantaged and vulnerable in the world, deprived of the most basic services and denied the right to thrive.”

According to the report, while cities offer many children the advantages of urban schools, clinics and playgrounds, the same cities the world over are also the settings for some of the greatest disparities in children’s health, education and opportunities. “About half the children in urban areas of sub-Saharan Africa are unregistered at birth,” and most of them are also not immunised, according to the report.

The report further shows that in areas where the population is high, immunisation levels are often low.

“Since slums are considered illegal, the government feels no obligation to ensure that slum dwellers have access to water and proper sanitation,” John Otieno, an urban real estate developer, explains.

“There is an absence of child-friendly initiatives in conceptualising urban infrastructure in Kenya. Space available for children to play is often grabbed by private developers,” he adds.

Globally, one out of three urban dwellers lives in slums, and in Africa the proportion is six out of 10.

The report states that the urban population is growing the fastest in Africa, followed by Asia. And while an increasing number of African children are growing up in urban areas, the proportion of children living in urban slums in countries such as Ghana, Nigeria, South Africa and Kenya is on the rise as well.

The report says: “Around two thirds of Nairobi lives in crowded informal settlements.” The city has an estimated population of 3.1 million people.

Wangui is part of this statistic. But hardships like hers are often concealed by national statistics that only report general averages.

“The lack of some is concealed by the excesses of others. In education for instance, East African countries are now implementing free primary education. Statistics show improved levels of enrolment but low enrolment in urban slums is often concealed,” says Dave Ndonga, a primary school teacher in Mukuru kwa Njenga, a slum in Nairobi.

The report states that in many African countries such as Ghana, Zambia, Zimbabwe and Tanzania, children in urban slums are least likely to attend school. However, countrywide average statistics in Tanzania show that the enrolment rate has doubled to about 97 percent.

“Children in slum areas drop out of school due to the additional costs of having to buy uniforms and even writing materials. But, there’s really little attention to the nature of education available to children in urban slums. Some classes have as many as 100 students per teacher,” explains Muigai Ngugi, a child’s rights activist in Nairobi.

He further says that these children are more likely to abuse drugs and alcohol and engage in criminal activities at the onset of adolescence as a result of minimal supervision from adults.

And although many African countries have drastically reduced deaths of children under the age of five years, the rate is higher in slums.

This is because, according to UNICEF, women in urban slums are more likely to wean their children earlier than their rural counterparts, thereby exposing them to health risks, and possibly death, before their fifth birthday.

UNICEF urged governments to put children at the heart of urban planning and to extend and improve services for all. “Children’s well-being is determined in no small measure by their environment. Their particular needs and priorities must be incorporated into efforts to improve housing, infrastructure, safety and governance. It follows that the work of local government and urban planning must be carried out with explicit recognition of the rights of children and young people,” the report said.