MANAMA, Feb 7 2012 (IPS) - It is far from Pearl Roundabout, the scene of last year’s crackdown on pro-democracy protestors, but for now Mughsha, a village in the northern district of Bahrain, serves as the centre of the country’s ‘Arab Spring’ movement. 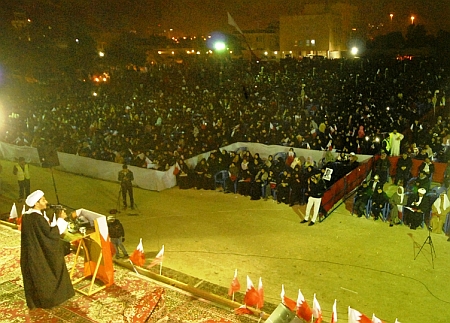 “We are back,” say thousands of protestors gathered in ‘Freedom Square’ in Mughsha since Saturday, to record opposition to the polices of the government of the Sunni Muslim Al Khalifa monarchy ahead of the anniversary of the Feb. 14, 2011 uprising led by majority Shias.

According to the 2001 census, 81.2 percent of Bahrain’s 1.2 million population was Muslim. While no separate figures are officially maintained for Muslim sects, more than 70 percent is believed to be Shia.

“The sit-in is the determination of the people to not go back to what the country was before Feb. 14. There is no chance for Bahrain to continue with discrimination,” Shaikh Aai Salman, general secretary of the main opposition Al-Wefaq (National Islamic Society) party, tells the gathering.

“As we were in the Pearl Roundabout, we are here in Freedom Square, welcoming all to attend and confront dictatorship,” the opposition leader says, reminding the protestors that they have no option but to continue fighting peacefully for their rights.

Freedom Square in Mughsha may be peaceful, but other areas in Bahrain are not. Many resemble war zones with young protestors hurling Molotov cocktails and clashing with police.

Complicating matters is the possibility that Bahrain, a key United States ally, may become embroiled in the current stand-off with Shia-dominated Iran. Already the government accuses Bahraini Shias of having a sectarian agenda.

Salman says the current protest will continue until the ruling elite ends its monopoly on power and 14 prominent figures convicted for leading the protests are released.

Activists say the ongoing violence has taken the death toll, since the uprising, to more than 60, some from teargas inhalation.

The gathering in Mughsha has permission to run till Wednesday and it is unknown if an extension will be granted for it to continue.

Foreigners and migrant labour have been targeted by angry youth and injured. On Feb. 3, a British man lost two fingers after being attacked with a sword by unidentified Bahrainis.

“Those who attacked public and private properties or members of the community, including members of the police force, were gangsters knowingly breaking the law,” the minister said, adding that an investigation to trace those responsible was underway.

According to a report in the ‘Gulf Daily News’, nearly 100 policemen were injured in violence in the last two weeks of 2011. To protect policemen, the government is pushing for a law to penalise attackers with imprisonment of up to 15 years.

Meanwhile, the London-based rights group Amnesty International (AI) has called on Bahrain to investigate more than a dozen deaths that followed the use of tear gas by security forces.

“The rise in fatalities and eyewitness accounts suggest that teargas is being used inappropriately by Bahraini security forces, including in people’s homes and other confined spaces,” said Hassiba Hadj Sahraoui, AI’s regional director.

With the sit-in confined to Mughsha and rioting limited to the villages and residential areas, the business district of Manama is undisturbed, though this may change.

Requests by opposition parties to be allowed to hold marches or gatherings in Manama have been declined by authorities and Pearl Roundabout sealed off.

Officials said protest activities were not being allowed in Manama to protect business interests and to avoid hindering traffic flow in the capital’s busy roads.