BRAZIL: A Curse on Hydropower Projects in the Amazon?

PORTO VELHO, Brazil, Feb 24 2012 (IPS) - “Perhaps it’s the curse of Rondônia,” joked Ari Ott, referring to teething troubles with the first turbine of the Santo Antônio hydroelectric plant which was intended to kick off a new cycle of huge power projects in Brazil’s Amazon jungle region. 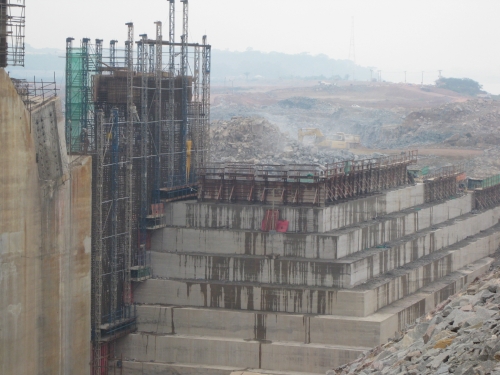 The enormous turbine, designed to generate 71.6 megawatts of electricity, overheated during initial tests in December and the necessary repairs delayed its coming onstream, now announced for late March, by at least three months.

Professor Ott, of the Federal University of Rondônia, said the problems “do not bode well” for the 44 turbines to be installed over a period of four years at the complex located on the Madeira river and run by the Santo Antônio Energia consortium, which is made up of Brazilian companies Odebrecht and Andrade Gutiérrez and other investors.

The use of high power “bulb” turbines is an innovation in Amazon jungle rivers that is suited to the low gradient and high flow rate of the Madeira river. Placed horizontally, unlike traditional vertical turbines, they require much less of a fall of water: in Santo Antônio, the drop will be only 13.9 metres.

Ott is not sure whether the turbines will be able to cope with the large amount of sediment carried by the river, which is still “a ‘young’ river, changing its shape and bed” with the seasons and carrying large numbers of trees along with its waters.

“When I used to bathe near the Santo Antônio waterfall, it would take days to get rid of the fine sediment that penetrated my pores,” said Ott, a medical doctor and anthropologist of German descent, who has witnessed the transformations that have taken place in Rondônia over the past three decades.

It would seem to be unimaginable that those responsible for a project requiring an investment of nearly nine billion dollars should not only make such a technical blunder, but also repeat it in a similar project, the Jirau hydroelectric plant, which is under construction upstream on the Madeira, some 110 km southwest of the Santo Antônio dam.

Both designs were based on sediment studies, although these were questioned by environmentalists.

The “curse of Rondônia” that may yet frustrate these large local projects is said to have arisen in the early history of this northwestern Brazilian state which is largely covered with Amazon rainforest, Ott explained.

Porto Velho, the state capital, was originally a labourers’ camp for the workers who built the Madeira-Mamoré railway in the early 20th century to transport latex, the raw material of natural rubber, extracted from the native rubber tree (Hevea brasiliensis) that grows dispersed in the rainforest. Latex exports were a source of great wealth in the Amazon regions of Brazil and Bolivia.

The natural route for exports was the extensive Madeira river, the largest tributary of the mighty Amazon river which flows into the Atlantic.

The upper basin of the Madeira covers central and northern Bolivia, southeastern Peru and western Brazil. But there is an unnavigable stretch, upriver from Porto Velho to Guajará-mirim, which the 366-km railway was built to circumvent, through forests and swamps.

The completion of the railway was one of the terms of a 1903 treaty to compensate Bolivia for territory previously taken by Brazil, comprising the present-day Brazilian state of Acre.

But the railway, a gigantic undertaking in its time, cost the lives of thousands of workers who arrived from every continent, but especially from the British West Indies. Tropical diseases like malaria and beriberi decimated the workforce, killing or disabling most of the labourers within a few months of arrival and creating a constant need for replacements.

In a tragic irony of history, the railway was inaugurated at the very moment that the Amazonian rubber business went into decline, due to the low prices of the more competitive and rapidly expanding rubber tree plantations established from seedlings taken by the British from Brazil to Malaya (now Malaysia).

Now uneconomic, the early railway service was repeatedly interrupted, there were conflicts with the latex exporters, and in 1931 the Madeira-Mamoré railway concession owned by U.S. and European capital threw in the towel. The railway limped on intermittently until 1972, thanks to efforts by the Brazilian government.

The laying of 1,786 km of telegraph lines to Porto Velho was a similar epic exploit, led by military commander Cândido Rondon, a national hero later promoted to army field marshal, after whom the state of Rondônia was named.

In addition to suffering from malaria and other diseases, his expeditions were attacked repeatedly by native groups. His reaction was never to counter-attack, but to seek out peaceful contact, and his attitude inspired the policy of protection of indigenous peoples in Brazil.

But by the time Rondon finally got the telegraph cables to Porto Velho in 1914, radio telegraphy had just been invented, said Ott. The workers who laid the lines and the telegraph operators “were abandoned to their fate for decades, and survived in native fashion, by hunting and fishing,” he added.

Nevertheless, laying the cables was not a complete waste of time, because the wireless telegraph system proved ineffective in the Amazonian climate, said Carlos Muller, a journalist who wrote his doctoral thesis on the history of telecommunications in Brazil.

Muller pointed out that Rondon also blazed the trail for the road route that, five decades later, would connect Rondônia with central Brazil.

That very road, the BR-364, became an axis of the expansion of the agricultural frontier from the 1970s on, associated with rising deforestation, conflicts over land-grabbing, disorderly migration, massacres of indigenous people and invasion of their ancestral lands, especially in Rondônia.

And the situation took a turn for the worse in the 1980s when the road was paved, a glaring example of the disastrous projects financed by the World Bank. Efforts were made to correct the mistakes in later decades, with the environmentally oriented Rondônia Agricultural and Forestry Plan (PLANAFLORO).

The Samuel hydroelectric plant, built between 1982 and 1989 on the Jamari river, a tributary of the Madeira, is another ecological disaster that is also apparently under a curse. The reservoir flooded 540 square km and the output is barely 216 megawatts. In comparison, the Santo Antônio reservoir will flood an area 35 percent smaller and have a 14.5-fold greater capacity.

Intensive activity by wildcat miners extracting gold and cassiterite have also brought more social and environmental problems than benefits to many places in the state.

Professor Ott carries out and directs university research into the impacts on the health of indigenous people of the “invasions” of Rondônia by outsiders, of which there is now a third wave.

After infectious diseases like measles and chickenpox came a wave of “modern” ailments like cancer, diabetes, heart disease and AIDS, and now “social pathologies” such as a rise in the murder rate, alcoholism and domestic violence, which “would once have been inconceivable in indigenous communities,” Ott said.

Rape, which has become common, formerly did not exist in a culture where men “were gentlemen” in sexual relations, following the woman’s lead, according to Ott.

The anthropologist derives satisfaction from the backpedalling forced on the Santo Antônio Energia company in negotiations with indigenous people who are indirectly affected by the hydroelectric plant.

The Karitiana people, who “live well” on their reservation 90 km from Porto Velho, realised that the consortium building the power station was paying compensation on a village by village basis. They promptly tripled the number of their villages, and received more reparations, including pick-up trucks, than originally envisaged.