LIMA, Feb 15 2012 (IPS) - The capture in Peru of the last major leader of the Maoist rebel group Sendero Luminoso is a mortal blow to the movement that managed to survive thanks to its connection with the production of coca and cocaine in the north of the country. 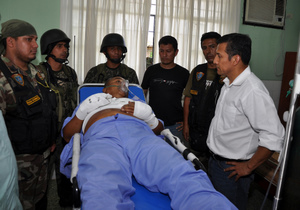 But the drug mafias active in the Huallaga Valley, in the Amazon jungle in northern Peru, where there are an estimated 13,000 hectares of coca and approximately 100 tons of cocaine are produced annually, will not be affected by the arrest of Florindo Flores, alias “Artemio”.

On Sunday Feb. 12, Artemio was captured by a joint police-army patrol in Cashiyacu, in the northern region of San Martín. The intelligence operation began on Feb. 9, when the rebel leader was shot and injured by one of his fellow insurgents.

The insurgent, a police informant, reported Artemio’s location to the security forces. But the Sendero Luminoso (Shining Path) leader was not actually found until Feb. 12, with a badly injured and infected hand.

“It is without a doubt a very important capture, but the drug trafficking industry will continue operating,” Nobel Panduro, an experienced radio journalist based in the area where Artemio’s group was active, told IPS by telephone.

He said “Artemio forged strong ties with the coca growers and the trafficking ‘firms’, but his imprisonment will not prevent them from finding someone else to protect their operations, whether a member of Sendero Luminoso or anyone else who has an armed group.”

Panduro lives in Aucayacu, within the area that was under the influence of the captured Sendero leader for the past 30 years, and he interviewed Artemio in 2001, 2003 and 2006.

“Sendero Luminoso received ‘cupos’ (war tax payments) from the drug traffickers to make sure drug production continued unimpaired, which is why the Maoists attacked the antinarcotics forces and the teams tasked with ‘eradicating’ coca crops (by hand). With Artemio in prison, anyone who can offer the mafias security will replace him,” the reporter added.

Artemio was born in 1961 in Camaná, a coastal town in southern Peru, and after completing his compulsory military service he joined Sendero Luminoso at the age of 20. The rebel group was founded in 1970 by Abimael Guzmán, who was captured in 1992 and is serving a life sentence at a naval base.

Artemio, who is now 50, quickly rose up in the ranks of Sendero, thanks to the military commando training he received in the army.

In a video of a 1988 meeting of Sendero’s Central Committee, Artemio was seen sitting next to Guzmán and the rest of the group’s top leaders, which confirmed his status in the organisation, where he was in command of the Huallaga Regional Committee, which covered the regions of Huánuco and San Martín, where the main trafficking organisations active in the flourishing drug trade were based.

When Guzmán was captured in 1992 and declared the end of the armed struggle against the Peruvian state, Artemio refused to surrender. The Sendero remnant he led survived the governments of Alberto Fujimori (1990-2000), Alejandro Toledo (2001-2006) and Alan García’s second term (2006-2011).

The group’s support base was the poor local coca-growing population, and it was financed by the cocaine trafficking groups that paid it in exchange for protection.

“The drug traffickers have lost a major source of support with Artemio’s capture. But the armed apparatus that he headed remains intact,” another prominent reporter from Huallaga, Felipe Páucar, told IPS.

“Another leader will undoubtedly replace him, and even if he won’t have Artemio’s level of political, ideological and military skills, he will try to continue serving the drug traffickers,” he said.

“The climate of violence generated by the drug mafias will prevail until the main lines of production are destroyed. As long as the drug trade exists, there will be subversion,” said Páucar, who lives in the town of Tingo María, in the region of Huánuco. The police team that captured Artemio was set up in 2007 as the special investigations division, DIVINESP, a unit in the anti-drug police.

After the Peruvian government demonstrated to the United States that the Maoist organisation in Huallaga Valley was linked to the production of drugs, it began to receive economic and technological support from the U.S. Embassy’s Narcotics Affairs Section (NAS) and the U.S. Drug Enforcement Administration (DEA).

NAS finances the operations that use UH1H helicopters, while the DEA provides a fund for paying informants, as well as a wiretapping team known as “Constellation”.

And in July 2010, the U.S. government offered a five million dollar reward to anyone who supplied information that led to the capture of Artemio.

In 2011, DIVINESP agents recruited a member of Artemio’s inner circle as a paid informant, with the aim of tracking down the rebel chief. The police infiltrator finally led them to him, and he was taken on Sunday to the Santa Lucía anti-drug military base in Huallaga Valley.

President Ollanta Humala visited the base to assess the state of the captured leader and urge him to call on his followers to lay down their arms.

Now there is only one active Sendero leader, Víctor Quispe, alias “José”, who operates in the Apurimac and Ene Rivers Valley (VRAE).

On two occasions he sent armed columns to the Huallaga Valley in failed attempts to eliminate Artemio and seize control of the organisation.

The group led by José, like Artemio’s, depends on support from impoverished local coca farmers and “protection payments” from the drug traffickers.

“One of the possibilities that occurs to me is that José, taking advantage of Artemio’s fall, will once again try to occupy the Huallaga Valley with his own people, and recruit the followers of the imprisoned Sendero chief,” retired general Otto Guibovich, a former army commander and analyst of security affairs, told IPS.

“It will be easier for him now because he will no longer run into resistance from an organisation that has been virtually demolished,” he said.

“What the Peruvian government has to do is consolidate its victory over Sendero Luminoso in the Huallaga Valley. The police and military must continue to exert pressure on Artemio’ scattered followers, to keep them from regrouping,” the retired general said.

In his view the government “should apply a vigorous economic and social programme in the regions of Huánuco and San Martín, where more than 50 percent of the population lives in poverty, which makes it an attractive breeding ground for subversion.

“In these areas, spending is needed on health, education and infrastructure. If this doesn’t happen, the violence could break out again, especially in an area where drug trafficking is a powerful economic activity,” said Guibovich.