The most urgent task is to reduce tensions between Iran and Israel and prepare "the road for further talks" to prevent any disastrous "unintended consequences", Hans Blix said in congressional testimony Tuesday.

WASHINGTON, Feb 23 2012 (IPS) - Even as U.N. inspectors expressed disappointment about the results of their visit this week to Iran, a former chief of the International Atomic Energy Agency (IAEA) urged all parties to make greater efforts to defuse rapidly rising tensions over Tehran’s nuclear programme to avert war.

“We don’t expect too much now, but we need to defuse the most acute things and prepare the road for further talks,” said Hans Blix, the former Swedish foreign minister who headed the IAEA from 1981 to 1997, at a Capitol Hill briefing for Congressional staffers here Tuesday.

“…We are now hoping that there will be a meeting between the Iranians and the P5+1 (the U.S., Britain, France, Russia, China and Germany) perhaps in Istanbul relatively soon, and we are now fearing there could be a war.” 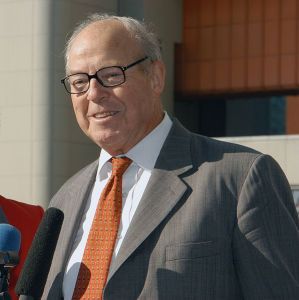 Hans Blix warned that all parties in the growing crisis over Iran’s nuclear programme “have boxed themselves into a corner”. Credit: Dean Calma/IAEA

“I think we can sit and dream about the big solutions. But for the moment we should be defusing a very acute and dangerous situation,” noted Blix, who also led the special U.N. inspection unit that investigated whether Iraq had weapons of mass destruction (WMD) in the run-up to the 2003 U.S. invasion.

The latest developments came as a high-level IAEA delegation returned from a two-day visit to Iran – their second in less than a month – apparently frustrated that some of their requests of the Iranian authorities were denied.

Although IAEA chief Yukiya Amano said that the visit to Tehran took place in a “constructive spirit”, Iran had refused his delegation’s request to visit its Parchin military base, which the IAEA suspects may be used for weapons-related testing.

For its part, an Iranian government spokesman insisted that cooperation with the IAEA “continues and is at its best level”.

Meanwhile, Blix warned that all parties in the growing crisis over Iran’s nuclear programme “have boxed themselves into a corner”.

Blix, who in a 2004 book accused President George W. Bush and British Prime Minister Tony Blair of exaggerating the WMD threat in Iraq in order to rally their publics behind the invasion, stressed that the most urgent task for the moment was to reduce tensions between Iran and Israel, which have risen sharply over the past two months, and prepare “the road for further talks” to prevent any disastrous “unintended consequences”.

Among other things, the U.S. and the European Union (EU), which, besides Israel, have taken the hardest line on Iran, should make clear to Tehran that “all our offers are on the table” and “not just the threats”, he told a briefing that was sponsored by the National Iranian American Council (NIAC).

Reports that Israel may attack Iranian nuclear facilities some time this year, as well as counter-threats by Tehran, have raised anxieties – as well as the price of oil – in key capitals around the world, including in Washington and London, two of Israel’s closest allies.

Last weekend, Chairman of the U.S. Joint Chiefs of Staff Gen. Martin Dempsey, who had returned from talks the week before with top officials in Israel, told CNN that an Israeli strike wouldn’t be “prudent” at this time. He also described Iran as a “rational actor”.

“The Iranians see there’s controversy between the United States and Israel, and that the Americans object to a military act. That reduces the pressure on them,” a senior Israeli official told the daily.

Appearing with Blix at Tuesday’s briefing was Colin Kahl, until recently the Pentagon’s top Middle East official. He told staffers that an Israeli strike on Iran would prove counter-productive. “If you’re worried about an Iranian nuclear weapon, the nearest pathway to that is probably a relatively ineffective Israeli strike,” he said.

Kahl argued that the Israeli calculation about Iran’s nuclear programme is “slightly different” than Washington’s.

The Israelis say they are worried that key uranium-enrichment capabilities could soon be buried so deep underground – notably at its Fordow plant near Qom – that they may be impervious to Israel’s biggest conventional bombs, allowing Tehran to enter a “zone of immunity” within months.

The Obama administration, however, has argued that the situation is not nearly so urgent, not only because Washington has munitions that could penetrate Fordow, but also because Iran faces many more challenges that would take at least two to three years to overcome in building a missile-deliverable weapon if it chose to do so.

“It doesn’t make a lot of sense to launch a preventive war on the basis of the zone of immunity if all you’ll do is force your adversary to reconstitute its programme in the facilities you can’t get at,” Kahl noted.

That point was echoed at Tuesday’s briefing by former chief IAEA inspector Robert Kelley, who stressed that all of Iran’s facilities that could be used to develop a nuclear-weapons capacity are under IAEA inspection.

“We want that to stay that way, and the worst thing that I can imagine right now is doing something short of war that causes the Iranians to kick the IAEA out. That would be a disaster.”

If, indeed, Iran threw out the inspectors as a result of an Israeli attack, noted Kahl, the international community would go “blind, (and) we would be forced into this situation of having to permanently encircle Iran and be ready to restrike on a moment’s notice with very bad intelligence on what they were actually doing,” he said.

“Eventually it’s a question of will power…a question of decision”, said Blix, who argued that, while the Iranians are on a nuclear “path”, it’s a “long fuse before they will have a weapon”. He added that the “end of the diplomatic line” has not yet been reached and that the benefits for all parties of a negotiated settlement would likely outweigh the costs.

Nonetheless, the Israel lobby is working hard on Capitol Hill to limit Obama’s flexibility in any upcoming P5+1 negotiation.

Last week, at least 30 senators introduced a resolution calling on the administration to rule out both a strategy of “containment” against a nuclear Iran and any negotiated settlement that would permit any enrichment of uranium by Iran on its own soil, even if Tehran agreed to the strictest possible IAEA oversight to ensure that none of it could be diverted to a weapons programme.

A former top Middle East analyst for the Central Intelligence Agency (CIA), Paul Pillar, warned Monday that the resolution, if adopted, “walks the United States farther down a path to launching its own war against Iran”.

While noting that the resolution is not binding, Kahl agreed that its “rhetoric” and “signaling” would prove counterproductive to prospects for a successful negotiation.

The effect of “boxing negotiators in” is to make a diplomatic solution “less likely and a kinetic outcome more likely”, he warned.

On Wednesday, Russia added its voice to warnings against an Israeli strike on Iran.

“Of course any possible military scenario against Iran will be catastrophic for the region and for the whole system of international relations,” Deputy Foreign Minister Gennady Gatilov said.

*Jim Lobe contributed to this article.