UNITED NATIONS, Feb 13 2012 (IPS) - A coalition of anti-nuclear peace activists and non- governmental organisations (NGOs) is launching a global campaign for a summit meeting of world leaders calling for the total elimination of one of the world’s most devastating weapons of mass destruction: the nuclear bomb. 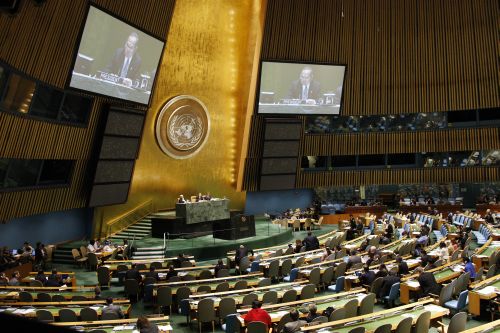 The 2010 High-level Review Conference of the Parties to the Treaty on the Non-Proliferation of Nuclear Weapons (NPT) at the United Nations. Credit: UN Photo/Mark Garten

The Tokyo-based Soka Gakkai International (SGI), one of the lead campaigners, wants the summit held in Hiroshima and Nagasaki in 2015, the 70th anniversary of the nuclear bombings that virtually annihilated the two Japanese cities.

The year 2015 will also mark the next five-year Review Conference of the Nuclear Non-Proliferation Treaty (NPT).

In a 23-page peace proposal titled “Human Security and Sustainability: Sharing Reverence for the Dignity of Life”, SGI President Daisaku Ikeda says, “In my proposal for nuclear weapons abolition issued in September 2009, I called for a movement that would manifest the will of the world’s people for the outlawing of nuclear weapons.”

“This, I argued, would establish and clarify by 2015 the international norm that will serve as the foundation for a Nuclear Weapons Convention (NWC), formally banning these weapons of mass destruction.”

The agreement reached by the 2010 NPT Review Conference provides a critical opening for this effort, he said.

“We must with all haste begin the work of making this legally binding in the form of a treaty,” he declared.

Additionally, it is also backed by Parliamentarians for Nuclear Non- Proliferation and Disarmament and the Western States Legal Foundation (WSLF), a founding member of the Abolition 2000 Global Network to Eliminate Nuclear Weapons, described as a coalition of more than 2,000 peace activists.

Jackie Cabasso, executive director of WSLF, told IPS Daisaku Ikeda’s call for a nuclear abolition summit in 2015 is consistent with a plan by Mayors for Peace to hold a high-level meeting of disarmament ambassadors, U.N. officials, parliamentarians and NGO representatives, to develop a clear roadmap that will lead to a nuclear-weapon-free world by 2020.

She said it will be developed in conjunction with the Mayors for Peace General Conference in Hiroshima in August 2013.

Cabasso, who also serves as North American coordinator for Mayors for Peace, said this will include preparation for the 2015 Nuclear Nonproliferation Treaty (NPT) Review Conference and planning for a second high-level summit meeting in Hiroshima later that year.

A third initiative, the Hiroshima for Global Peace Plan, was launched by Hiroshima prefecture Governor Hidehiko Yuzaki in October of last year.

The plan, formulated by the governor and a group of former government officials and academics from the United Nations, United States, Australia and Japan sets forth a central role for Hiroshima as a global peace hub to, among other things, support a roadmap for the abolition of nuclear weapons and contribute to the promotion of a concrete and sustainable process for the abolition of nuclear weapons with a view towards governmental negotiations (Track I).

In his wide ranging peace proposal, Ikeda, who is also an eminent Buddhist philosopher, expressed confidence over the proposed summit, even though some peace activists predict it may receive only lukewarm support from the five declared nuclear weapon states, namely the United States, Britain, France, China and Russia.

Since 1996, the U.N. General Assembly has adopted annual resolutions calling for the start of negotiations on an NWC.

Ikeda pointed out that support for this resolution has continued to grow; last year 130 member states supported it, including China, India, Pakistan, North Korea and Iran.

In 2008, U.N. Secretary-General Ban Ki-moon proposed negotiations on an NWC or a framework of separate, mutually reinforcing instruments.

And the 2010 NPT Review Conference noted this proposal in the final outcome document it adopted with the unanimous consent of all participants.

In September 2009, the U.N. Security Council held a special summit session in which it adopted a Resolution (1887) pledging efforts to create the conditions for a world without nuclear weapons.

Meanwhile, the Inter-Parliamentary Union (IPU), which comprises 159 countries, including Russia, the United Kingdom, France and China, has also unanimously expressed its support for this proposal.

Cabasso told IPS that if and how these initiatives will fit together is unclear, but there is no doubt that momentum is building for 2015 to be a milestone year for advocates of nuclear weapons abolition, with Hiroshima and Nagasaki as focal points.

As Daisaku Ikeda notes, she said, the 2015 NPT Review Conference will be another make-or-break point for the nuclear nonproliferation and disarmament regimes.

The year 2015 will also mark the 70th anniversary of the U.S. atomic bombings of Hiroshima and Nagasaki, and underscored by the continuing Fukushima nuclear disaster, there is a palpable sense of urgency among the aging hibakusha (A-bomb survivors) that nuclear weapons must be eliminated before the last of them dies along with their first-hand memories of the unprecedented horrific events of August 1945 that opened the door to the nuclear age.

Mayors for Peace was established in 1982 by the Mayors of Hiroshima and Nagasaki following the U.N. Second Special Summit on Disarmament in 1982.

On Sep. 21, 2011, the International Day of Peace, Mayors for Peace announced that its membership had grown to more than 5,000 cities in 151 countries and regions.