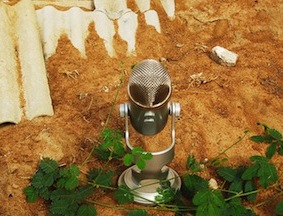 Radio advocates believe there are barriers for community radio stations in Ghana, which are detrimental to press freedom. Credit: Sandra Ferrari

Recently, community radio supporters rallied through the streets of Accra in what they called a “Voice Walk”, which Ghana’s National Communications Authority (NCA) described as irresponsible and unexpected.

“Everything we do, we consult them. I don’t know what has happened,” says Henry Kanor, deputy engineer for the NCA.

This past November, members of the Ghana Community Radio Network (GCRN) and the Coalition for Transparency of the Airwaves (COTA) demanded that government answer to the limited frequency allocation being given to community radio stations. Across the country, there are 11 community radio stations on air with 14 more waiting to receive their frequency.

“It’s just a deliberate refusal to give people a voice,” says Wilna Quarmyne, Deputy Executive Director of the GCRN and community radio pioneer in her native Philippines. She believes the NCA is subtly putting up barriers for community radio stations in Ghana and the implications of this are detrimental to the freedom of the press here in this West African nation.

According to Quarmyne, in December 1999, the then Minister of Communication promised to lift the freeze on frequency allocations exceptionally for community radio, because of their developmental role.

“By the following Easter 2000 this had not happened. Then we went back to him and he said, ‘By November 2000’. It didn’t happen. Then there was a change in government. It is the same pattern.”

“We involved them in all of our operations. But some of them don’t understand the concept of how things should run and they turn they whole thing into politics,” says Kanor.

According to the NCA, some of the awaiting stations have been granted frequencies, however, these stations are either not yet set up or they were granted a frequency but failed to follow up with their applications.

Quarmyne insists: “Although we started formal advocacy in 2004, the project is still lingering and I don’t know when it will see the light of day – no one really knows.”

The NCA maintains that if the frequencies are available they will be allocated to community stations that apply.

While the previous Guidelines for Operation of Community Radio Stations in Ghana stated that the NCA had to respond to an application within 60 days, the current guidelines no longer includes this clause and there is no legal provision requiring the NCA to award frequencies within a given time.

Advocates maintain, however, the untimely manner to which these applications are processed are part of a more sinister plan to corrupt plans to develop community radio stations in Ghana.

“I tell people that if you look at the reality on the ground, the few on-air community radio stations that there are have managed under great odds to be and to be perceived as non-partisan by their communities, which is a tremendous achievement in this highly polarised environment,” says Quarmyne.

These disputes have made for an anti-climactic battle for the airwaves, that officially began almost 12 years ago with the start of the GCRN and the first independent radio station, Radio Ada, which Quarmyne founded with her husband Alex Quarmyne.

“(Opponents to press freedom) have gone underground, but they are still very real,” says Quarmyne.

“We are still where we were in 1999 when we began the Ghana Community Radio Network.”

Last year the National State Security branch of the Ghanaian government proposed a plan to initiate state owned and operated district assemblies across the country.

“If you can imagine,” says Quarmyne, “a town in which a community radio station is operating – should there be a district assembly radio – of course proponents to the party in power will gravitate towards the district assembly radio, leaving the community radio station with no option but to be populated on the air only with opposition figures and automatically being branded as an opposition station. Even at the most practical level that’s what will happen.”

The NCA drafted a proposal and presented it to the Minister of Communications, but no plans have been solidified to date.

“That argument should not go there,” says Kanor. It’s not like the government says I will have district assembly stations and no other stations. That’s not the agreement.”

Both parties acknowledge the value and the role of radio in Ghana but priorities and fundamental beliefs for both parties keeps them ideologically at odds.

“Currently we have about 204 operative radio stations in Ghana – community, campus and commercial. They are playing a very vital role in society. Some are helping education, and entertainment. They also take care of women’s issues. Especially in the north, they help the farmers a lot,” says Kanor. “We also have a responsibility – a model for broadcasting stations. So why do you want to go and recreate the wheel?”

According to the GCRN, the role for community radio is to enable marginalised communities and groups to participate actively in the discourse and the direction of development in Ghana.

“Unless we are able restructure the organisation of communication resources – in order to give them a voice that they are proactive in – development will always be controlled as it has been by a small group that perpetuates its own interests,” says Quarmyne.

According to the 2008 statistics provided by the United Nations Children’s Fund, Ghana’s total adult literacy rate is 66 percent, making radio an essential tool for education in the country.

The NCA maintains that they will not respond to hostile ultimatums imposed upon them by the GCRN and COTA.

Radio advocates in Ghana will continue to fight, they say.

“In many countries media regulatory bodies are independently constituted. They are not answerable to the executive, so at least you have a fighting chance.”