Scientists Find Link Between La Niña and the Flu

MEXICO CITY, Feb 14 2012 (IPS) - Weather patterns could have an influence on the spread of epidemics like that of the H1N1 influenza virus, initially known as swine flu, which broke out in Mexico and the United States in 2009. 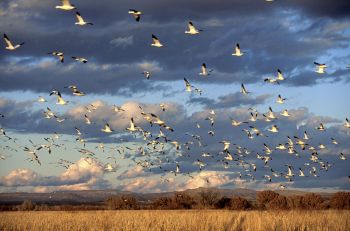 That is the hypothesis set forth in a scientific article that calls for research into the links between weather variations, bird migration, and influenza pandemics.

“We examined the four most recent human influenza pandemics (1918, 1957, 1968 and 2009) and found that each pandemic occurred in spring or early summer and was preceded by below-normal sea surface temperatures, indicative of the La Niña phase,” Jeffrey Shaman of Columbia University’s Mailman School of Public Health told Tierramérica.

“Wild birds are thought to be the primary reservoir of influenza A viruses and facilitate the emergence of new pandemic lineages through the introduction of virus to domestic animals and humans,” says the article by Shaman and his colleague Marc Lipsitch of the Harvard School of Public Health.

“Migratory birds, with their long travel distances and many stopovers, are thought to be particularly critical for the mixing and reassortment of influenza virus genomes,” the authors add.

La Niña is the cold phase of ENSO, a cyclical climate phenomenon that affects weather patterns around the world and forms part of the system that regulates heat in the eastern tropical Pacific Ocean.

ENSO has a three- to seven-year cycle. But La Niña can occur in consecutive years, as it has in 2011 and the first two months of 2012.

Shaman and Lipsitch say “La Niña conditions bring divergent influenza subtypes together in some parts of the world and favour the reassortment of influenza through simultaneous multiple infection of individual hosts and the generation of novel pandemic strains.”

ENSO has been shown to influence the health and behaviour of migratory birds by altering bird biomass, flight and stopover patterns, time to moult, and population density, they note.

The climate phenomenon drastically affects weather conditions, including temperatures, precipitation, wind speed and direction, which can influence the behaviour of migratory birds.

In April 2009, cases began to appear in Mexico of a previously unknown influenza A virus, which was subsequently given the name H1N1. As the epidemic spread, the federal government and the Mexico City government ordered schools and businesses to close, and cancelled mass public events like concerts or mass.

In June that year, the World Health Organisation (WHO) declared an H1N1 pandemic and promoted the development of vaccines and oseltamivir, sold by Swiss drug giant Roche under the brand name Tamiflu.

“It has always been known that weather patterns have affected viruses, since the time of the ancient Greeks,” Federico Ortiz, a Mexican physician who wrote the book “Código A (H1N1). Diario de una pandemia” (“Code A (H1N1); Diary of a Pandemic”) in 2009, told Tierramérica.

“The germ evolves quickly during cold, dry periods, and both conditions have come together now,” he added.

There has apparently been an increase in cases since 2011. Last year, 925 cases of influenza were recorded, and so far this year 2,815 cases have been reported, 2,544 of which involved the new virus.

“The effect of La Niña on migratory bird health and behaviour could be one means by which the large-scale environment alters the likelihood of influenza virus reassortment events and cross-over to human hosts,” said Shaman.

There is abundant literature documenting the effects of ENSO on infectious diseases like malaria, dengue and cholera, as well as preliminary studies on its relationship with seasonal influenza epidemics.

But “At present, our ability to predict the development of a novel influenza pandemic is limited. Instead, surveillance and response are the principle means for identifying and controlling a new influenza pandemic after it has emerged,” the authors say.

“There are higher incidence and mortality rates for common influenza. H1N1 is not as lethal as was initially thought,” said Ortiz. “But as the virus spreads, its genetic diversity grows. That is why it could continue to expand.”