MOGADISHU, Feb 23 2012 (IPS) - With an international meeting aimed at resolving the political crisis in Somalia set to take place Thursday, the local media in this East African nation is awash with scepticism, referring to the efforts as a new system of re-colonising the country.


The country has been without an effective government since 1991. The meeting, hosted by British Prime Minister David Cameron, will have representatives from global organsiations and over 40 governments, including Nigerian President Goodluck Jonathan and U.S. Secretary of State Hillary Clinton.

Britain has also invited representatives of Somalia’s Transitional Federal Government (TFG), as well as the presidents of the breakaway Somaliland, Puntland, and Galmudug, and the non-militant Islamist group Ahlu Sunnah Waljama’a (ASWJ).

But one of the country’s most influential political leaders and future presidential candidate, Omar Abdirahman Mohamed, told IPS said that Britain wanted Somalia to have a “weak administration”.

“The U.K. doesn’t want Somalia to have its military reformed and it was the sole superpower that negated the lifting of the arms embargo on Somalia. This shows that the U.K. government is totally against the formation of a stable government and powerful military in Somalia,” said Mohamed, who heads the Mogadishu-based Midnimo Political Party.

In 2008 U.K. law implemented various statutory instruments to enforce the arms embargo on Somalia. The embargo was first implemented on the country by the United Nations in 1992 after civil war broke out. It was partially lifted in 2007 to allow the importation of arms by the African Union Mission in Somalia.

“All Somalis are carefully watching the London conference and its outcome. Let the conference not be a conspiracy against the sovereignty of Somalia,” Mohamed said.

An alleged “leaked” communiqué, apparently written for release after the talks, has been circulating here, fuelling speculation in this East African nation about the negative outcome of these talks.

One controversial point on the document, which is available online, refers to allegedly passing on the functions of government to a caretaker authority until the constitutional discussions are concluded. However, the point further explains that the country’s constitution must be endorsed through a referendum or elected parliament.

The radio station Voice of the Peace said in its editorials that the U.K. was not looking for a lasting solution for Somalia.

Most newspapers including Kulmiye News and Xog-ogaal highlighted stories of locals who were concerned over Somalia becoming a colony once more.

One well-known elder, Ahmed Diriye, told local Radio Daljir he did not believe that the London conference would have positive results for Somalia. “We know that Kenya (does not have a) powerful military and that was (because of the) U.K., and I am afraid that it wants Somalia to have only a police force,” Diriye said. 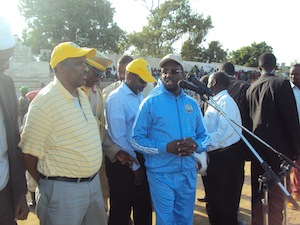 Somali President Sheik Sharif Sheik Ahmed (c) said that the international community was committed to putting an end to the lawlessness in the country. Credit: Shafi’i Mohyaddin Abokar/IPS

“There is no cause for concern over the sovereignty of the country. I can assure the Somali people that the London conference will focus on the interest of Somalia and how the world community can help the country out of its long-existing hardships,” Ahmed said Friday.

He was speaking in Garowe, a town in the breakaway state of Puntland, where the Somali government, regional autonomies, civil society, and ASWJ met to sign a deal outlining the composition of the country’s new parliament when the transitional period ends this August.

Ahmed said that the international community was committed to putting an end to the lawlessness in Somalia.

The British Ambassador to Somalia Matt Baugh told IPS from his Nairobi office that the conference is aimed at delivering a new international approach to Somalia and would form the basis for coordinated and sustained international leadership.

He added said that while the five-hour conference would not solve all the problems in Somalia, Britain wanted it to be “the catalyst for more international engagement in Somalia and more effective Somali leadership.”

He denied local media reports that the London conference will pave the way for a colony in Somalia and said that the British government and the international community wanted to help Somalia emerge from its problems.

“There are no options for colonising Somalia,” the ambassador insisted.

“We are holding this conference now because enough is enough. The suffering during the famine was a wake up call for the international community.  It’s time to arrest Somalia’s relentless decline – and make the most of the opportunities in front of us. We have an opportunity to support a more inclusive and representative political process when the transitional period ends in August,” he said.

However, the extremist group Al-Shabaab, which recently announced a merger with international terrorist group Al-Qaeda, denounced the conference saying that it intends to destroy the existence of Islam in Somalia.

“The U.K. has already colonised many Muslim countries and it wants to have colonies in Somalia again. Christian governments and their puppets are meeting there in London and they will tell the so-called TFG something to implement in the country, but that will not really work,” Al-Shabaab’s main preacher, Sheik Fu’ad Mohamed Qalaf, told the group’s radio station on Tuesday.

Many Somalis are hopeful that the conference will bring lasting peace to their country.

“The path of reconciliation, forgiveness and tolerance is needed so the wounds of your homeland may be healed and the plight of your people may come to an end,” the Imam of Somalia’s Al-Azhar Mosque, Dr. Sheik Ahmed El Tayyeb, said of the conference.

His comments helped some change their negative views of the talks.

“The Imam knows more than we do, so from now on I am very hopeful of the London conference and I am calling all Somalis to help the government implement the conference outcomes on the ground,” Abdi Abdulle Ahmed, a former schoolteacher, told IPS.

Meanwhile, other locals have high expectations of the conference. Well-known Somali folklore dancer Ahmed Abokar Abuna said he hopes that it will bring stability to the country.

“I believe the world is now struggling to solve Somalia’s problems so that Somalis and the whole world will be rescued from the danger of terrorists who have bases in Somalia,” he told IPS while walking along the Via Liberia Road in Mogadishu. Al-Shabaab control large parts of southern Somalia and until last year controlled large portions of the country’s capital.

Sahro Moalim, a 22-year-old university student in Mogadishu, said that she had never experienced peace in Somalia and she hoped it would be an outcome of the conference.

Eyni Ahmed, a political analyst and the chairwomen of Somali Youth League, a group that aided with the disarmament of hundreds of former Al-Shabaab child soldiers, told IPS that the situation on the ground in Somalia is currently dangerous and the conference needed to find a resolution for the political turmoil.

“If it continues like this, if lawlessness and killings continue, it will have a bad impact on the country’s existence … so there will come a time when the world will say: ‘There was a country called Somalia once upon time,’” Eyni told IPS.