MÁLAGA, Spain, Feb 13 2012 (IPS) - In its less than two months in office, Spain’s new conservative government has begun to introduce sweeping educational and reproductive health reforms, prompting protests from the opposition and from civil society groups, which see them as a throwback to an earlier era. 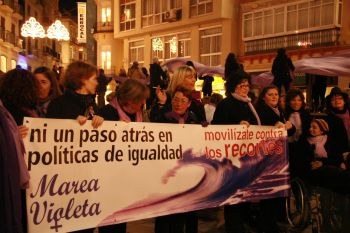 The measures proposed by the government of Prime Minister Mariano Rajoy of the centre-right People’s Party include a modification of the law on sexual and reproductive health, known as the abortion law, in effect since July 2010.

Justice Minister Alberto Ruíz-Gallardón announced that he would seek legislative changes in the timeframes for legal abortions, and would make parental consent obligatory for girls aged 16 and 17.

For its part, the health ministry said it would seek restrictions on the emergency contraceptive pill, or “morning-after pill”, which has been available in pharmacies without a doctor’s prescription since 2009.

“These are attacks on the basic rights of women,” Teresa Pineda, one of the spokeswomen for Marea Violeta (Purple Tide), an umbrella group of women’s rights organisations that first emerged in the southern city of Málaga, told IPS.

The activist said that “although we’re talking about cutbacks, what is essentially at stake here are ideological, not economic, questions.”

She also called the reform of the abortion law “classist,” because “if a woman wants to abort she will do so,” but if the law is modified as proposed, the least well-off will be forced once again to resort to life-threatening back-alley abortions.

The law currently in effect, which was pushed through by the government of socialist Prime Minister José Luís Rodríguez Zapatero (2004-2011), does not require parental consent for girls between the ages of 16 and 17.

However, their parents do have to be informed of the abortion, unless that would put them in danger of domestic violence, threats, coercion, mistreatment or being kicked out of their home.

Under the law that entered into force in 2010, abortion on demand is legal until the 14th week of pregnancy. But the reformed legislation would be similar to the 1985 law that made it necessary for women to justify why they wanted an abortion.

The president of the Spanish Federation of Pro-Life Associations, Alicia Latorre, said she was completely opposed to any law on abortion, “which is so cruel that no developed society should even consider it an option.

“Equality and freedom are incompatible with abortion,” she told IPS.

Latorre added that the Federation she heads “is pleased with the government’s announcement and looking forward to the coming measures, because it was about time that we had progressive legislation that ensures everyone’s right to life and helps the weakest.”

But in protests organised by Marea Violeta on Friday Feb. 10 in the main squares of more than 40 Spanish cities, hundreds of women demonstrated against “the patriarchal offensive of conservative governments” which, according to the group’s manifesto, have cut funding for policies aimed at bringing about equality between men and women.

The theme of Friday’s demonstrations was “Not one step backwards in equality policies; mobilise against the cutbacks.”

Marea Violeta complains that conservative administrations have eliminated subsidies for women’s shelters and clinics and have “dismantled” the Women’s Institute – moves that amounted to “violent attacks on the advances made under democracy,” which was restored in Spain after the death of dictator Francisco Franco in 1975.

Pineda said “another struggle” is for the “law to promote personal autonomy and care for dependent persons” – known as the “dependency law” – which has benefited many women as they are the chief care-givers.

The government suspended for one year the incorporation of new categories of beneficiaries under the dependency law, which funds the services needed by people suffering from illness, disability, accident or old age.

In a Feb. 8 interview on public radio, the general vice secretary of the opposition socialist party (PSOE), Elena Valenciano, said the reforms to legislation like the abortion law represented “a setback to 30 years – or even several centuries – ago.”

These changes will make “Spanish society more retrograde than it really is, just because of the government’s ideology,” she said.

Another law that the government wants to modify is the same-sex marriage law, approved in 2005.

Amending or repealing the law “would be a mistake of colossal proportions,” Beatriz Gimeno, former director of the State Federation of Lesbians, Gays, Transsexuals and Bisexuals, told IPS.

Rajoy, who has governed with an absolute majority in both houses of Congress since Dec. 21, has repeatedly stated that his problem with the law is the name: that it should refer to “civil unions” rather than “marriage”.

Gimeno said overturning the law or changing its name would create “a situation of inequality” between those who have already married under the law and those who married in the future. She also warned of the “negative symbolic and social effects” of changing the name.

“Only fascist regimes, like that of Francisco Franco (1939-1975), have changed the civil status of families,” said Gimeno, a writer.

Another of the changes announced is the replacement of the course “citizenship education” approved by decree in 2006 with a course on “civic and constitutional education” that would eliminate “controversial questions and issues that are susceptible to ideological indoctrination,” said Education Minister José Ignacio Wert.

Pilar Iglesias, a high school teacher who is on the Marea Violeta coordinating team, told IPS that the change in curriculum could result in censorship.

But Catholic bishops in Spain and organisations like Professionals for Ethics and the Spanish Confederation of Teaching Centres applauded the announced course change.

The “citizenship education” course, designed by parliament, fulfils a 2002 recommendation by the Council of Europe but “contains debatable questions that shouldn’t be imposed on students” and “should not be a tool in the hands of government,” a spokesman for Professionals for Ethics remarked to IPS.

If the reform goes through, any material that does not refer strictly to an understanding of the constitution and the institutions of democratic societies and the European Union would be cut.

That would eliminate, for example, the chapters that discuss interpersonal and human relations, making subtle references to respect for diversity in family and sexual relationships.

“These reforms cater to the most reactionary segments of the governing People’s Party,” said Gimeno, who argued that if they are approved, “they will put Spain at the level of the least advanced and democratic countries.”

Other announcements, like the introduction of “permanent prison sentences” – subject to periodic review – for “crimes that cause great social alarm,” have been questioned by organisations like the Pro Human Rights Association of Andalusía, which called the proposition a “populist” measures and said in a statement that stiffening prison sentences “does not help reduce crime rates.”

A wide variety of critics say the government’s announced reforms are politically motivated and aimed at appeasing the most conservative sectors of the party while drawing attention away from the severe economic crisis that has driven the unemployment rate up to 22 percent, and to 50 percent among young people.

Rajoy is facing a wave of social unrest, with unions, teachers, students and parents protesting for months over cuts to non-university education in Madrid.

Meanwhile, Marea Blanca (White Tide), which represents health workers, is protesting against modifications of their working conditions and loss of wages, while the librarians’ union, Marea Amarilla (Yellow Tide), is demonstrating against cuts to funding for libraries.