CASABLANCA, Feb 10 2012 (IPS) - Deadly clashes between police and youth in the Northeastern town of Taza last week suggest that, far from bringing change and stability, Morocco’s new government is simply repeating mistakes of the past, stoking tensions and fuelling a spate of protests against the regime. 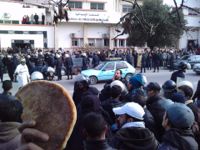 Demonstrators outside the court in Taza. Credit: Abderrahim El Ouali/IPS.

In an effort to keep its population in check during the Arab Spring, the regime launched a process of reforms last February and brandished what it called ‘the Moroccan exception’, boasting of relative calm during a period of intense regional turmoil.

A new constitution took effect on Jul. 1, 2011, granting wider powers to the executive of the new government while supposedly cutting back the authority of the monarch.

This was followed by general elections last September, which were snapped up by the Islamists of the Justice and Development Party (PJD), whose general secretary, Abdelilah Benkirane, was subsequently named the head of the new government.

But Benkirane, who presented his programme to parliament last month, has thus far failed to deliver on his election pledges.

For instance, the promise to completely eradicate unemployment, which currently touches 19 percent of the working population, evaporated soon after his appointment, giving way to a negligible decrease in joblessness of a single percentage point.

Habib El Maliki, president of the Moroccan Centre for Conjuncture (CMC), told journalists on Jan. 20, “The government’s plans to fight joblessness were not strong enough. The programme determined objectives without means, and any programme without means is doomed to failure.”

Public opposition to political procrastination has been swift and the streets of Morocco have become a veritable minefield of tension.

Following a violent police clampdown on a demonstration by graduates demanding jobs outside the ministry of education in Rabat on Jan. 21, a 27-year-old unemployed graduate named Abdelwahab Zaidoun set himself ablaze in the streets.

Once a rare occurrence, self-immolation has become a much more frequent tactic in the Arab world, after Mohamed Bouazizi, a Tunisian vegetable seller, burned himself alive last year, igniting from his simmering remains the revolutions known as the Arab Spring.

Zaidoun succumbed to his burns on Jan. 24, his tearful 25-year-old wife told the Associated Press last month, adding, “I accuse the makhzen (the ruling elite) of killing him.”

Zaidoun’s death, five days after the government’s inauguration in front of the parliament, triggered a wave of protest throughout the country. In several cities, protesters have called for the abolition of the monarchy.

One of the most incendiary protests so far sprang up in the city of Taza, one of the kingdom’s poorest regions, located 340 kilometres Northeast of Casablanca, on Feb. 1.

Here, the new Islamic government exposed its true colours, lashing out savagely in a police-protester confrontation that left about 100 people on both sides injured.

Rahim Moktafi, an activist from the ‘February 20th’ movement, was an eyewitness to the events.

“At first, the protests were peaceful. The police surrounded the city. They blocked Internet connections and cut off the telephone lines before beginning to club everybody,” he told IPS.

“The police even entered the houses of citizens to club them,” he added.

Videos shared on social networks showed civilians claiming that they were threatened with beatings and rape in their own homes.

“Morocco has always been one of the most violent regimes in the world, and the Islamist government is the best mask for the regime to go on with its same old practices,” Moktafi said.

Far from bringing much-needed change, “This government will only extend the tyranny for five more years,” he said.

Anger against the “bearded government”, as it is referred to in the local press, does not come only from the fields of confrontation with police.

In Marrakesh, 250 kilometres south of Casablanca, where demonstrations were held in solidarity with Taza, public anger is no less palpable.

Abou Zahrah, a Marrakesh-based activist with the February 20th movement, told IPS, “The arrival of the Islamists in the government is only a political manipulation by the regime.”

Another of Benkirane’s election campaign promises was a guaranteed minimum wage increase to 3000 dirham, approximately 465 dollars.

Once promised by the king, the wage increase has now been postponed to 2016, leaving the current minimum wage at 2300 dirham, roughly 290 dollars, per month.

According to Rachid Abou Zahrah, “the Islamist government will have no positive impact on citizens’ lives. The only increase we shall see will be in the number of veiled women.”

He is not being ironic. The fate of women’s rights in the era of the bearded government is a major cause for concern across huge swathes of the population.

During the presentation of his governmental declaration before parliament earlier this year, Benkirane was overshadowing a protest by women MPs against the lack of female representation in his government. Despite the ‘four women’ quota, only one was allowed to serve in the last government.

“The government is crushed between a modernist pole, represented by the revolutionary February 20th movement, and the traditionalists,” Aziz Nidae, a political activist from the city of Fez, nearly 300 kilometres north of Casablanca, told IPS.

But judging from the government’s recent actions and according to the analysis of the local press, the government has shown that its allegiances lie with the conservatives.

In fact Akhbar Al Yaoum, a local daily newspaper, remarked that the word ‘modernity’ was completely absent from the new government’s programme of action.