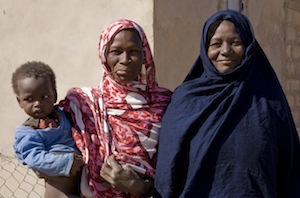 Maternal health is not a priority in Africa. Credit: Kristin Palitza/IPS

“African countries with good maternal health statistics are generally those that have long-term political stability. This shows that stability is a fundamental basis for development. If it doesn’t exist, other priorities overtake,” Lucien Kouakou, regional director of the International Planned Parenthood Foundation (IPPF) in Africa, told IPS.

Natural resource-rich but conflict-ridden Nigeria and Democratic Republic of Congo, for instance, continue to struggle with high maternal mortality rates of up to 1,000 deaths per 100,000 live births, according to 2011 World Health Organization (WHO) statistics. In war-torn countries like Somalia, maternal mortality is even higher, at more than 1,200 deaths per 100,000 live births.

“Regions like West and Central Africa, that experience a lot of political instability, have the lowest indicators for maternal health on the continent, despite the fact that most of them are rich in terms of natural resources,” Kouakou explained.

As a result, more than 550 women die in childbirth every day in sub-Saharan Africa, according to the WHO, compared to five deaths per day in high-income countries. The risk of a woman in a developing country dying from a pregnancy-related cause during her lifetime is 36 times higher compared to a woman living in an industrialised nation.

If a mother dies, the whole community feels the negative impact of the gap she leaves. “High maternal mortality has grave consequences not only for families but also for communities,” said Dr Edith Boni- Ouattara, deputy country representative of the United Nations Population Fund (UNFPA) in Ivory Coast.

Since mothers are usually the main caregivers, their health status, and especially their death, stands in direct correlation with the well-being of their immediate and extended family. “A mother’s death has a negative impact on all aspects of a child’s life, including nutrition, health and education,” the UNFPA representative noted.

But despite these indicators, maternal health is far from being made a national priority in African nations. As soon as governments are faced with political threats or humanitarian emergencies, investments in maternal and infant health as well as family planning are the first to be cut, according to Kouakou.

More than a third of women in sub-Saharan Africa do not have access to any pre-natal health services today, while 70 percent do not receive any post-natal care, according to UNFPA. In West and Central Africa, less than 15 percent of women have access to contraception and family planning.

Sadly, this was largely the case because available budgets were disproportionately targeted towards defence, noted Kouakou: “Most public hospitals struggle with health service provision and continuously run out of medicines, but if you visit a military camp in that same country, you’ll see the latest weapons.”

Second on the priority list of governments is usually the fight against poverty and hunger, which is also the first of the eight United Nations Millennium Development Goals (MDGs) that nations have committed themselves to reach by 2015.

In sub-Saharan Africa, the proportion of people living on less than 1.25 dollars a day has only decreased marginally in the past two decades, from 58 percent in 1990 to 51 percent in 2005, according to the latest World Bank statistics.

As long as African nations remain poor, investments in maternal, sexual and reproductive health will remain minimal, experts say. Many countries will therefore struggle to reach the three health-related goals – MDG 4 (the reduction of under-five child mortality by two-thirds), MDG 5 (reducing maternal mortality by three-quarters and achieving universal access to reproductive health) and MDG 6 (combating HIV/AIDS, malaria and other diseases) – within the next three years.

Few governments are conscious enough of the tight link between maternal health and poverty, he said. It takes strong leadership at the country level to shift those priorities and spend more on maternal and child health, and more effective implementation of existing policies and international agreements, he added.

The right to family planning and thereby to sexual and reproductive rights has, for example, been included in the U.N. human rights framework since 1974. But such services have until today not been included in the public health care provision in many African countries.

“Yet, family planning services could reduce maternal and infant mortality by a fifth. Access to qualified medical care could reduce deaths during the birthing process by 75 percent,” Boni-Ouattara noted.

In the southern and eastern regions of the continent, the situation looks slightly different. Here, most nations have enjoyed relative political stability and been affected by fewer humanitarian disasters compared to their neighbours in West and Central Africa. As a result, maternal and infant mortality rates were on the decrease – until HIV and AIDS started to pose a threat to maternal health in those countries.

Consequently, politically stable countries with relatively low HIV-infection rates, like Botswana, have the lowest maternal mortality rates on the continent, at under 300 deaths per 100,000 live births, according to the WHO.

But in countries like South Africa, HIV/AIDS has undermined efforts. Despite strong political and economic stability, its maternal mortality rate is at up to 549 maternal deaths per 100,000 live births.