LUANDA, Mar 8 2012 (IPS) - The brightly painted old shipping container with solar panels on its roof and high-specification filtration devices inside looks out of place in this dusty Angolan village of Bom Jesus, 50 kilometres east of the capital Luanda. 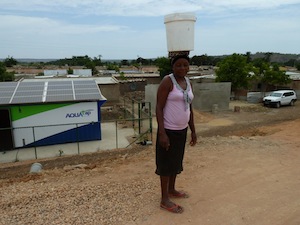 Joaquina Xavier – who currently collects water from the river – in front of the new AQUAtap machine in her village. Credit: Louise Redvers/IPS

But it will soon be providing nearly 20,000 litres a day of clean, drinkable water to the area’s 500 residents who currently rely on dirty supplies from the nearby river.

Designed by Canadian technology company Quest Water Solutions, the stainless steel drinking station called “AQUAtap” is being globally piloted in this Southern African nation with a view, if it is successful, to start manufacturing the systems locally to roll out across the region.

Using solar energy stored in large batteries, water from the River Kwanza, 50 metres away, is processed through sand and other filters. Then UV is used to sterilise the water to World Health Organisation (WHO) drinking standards ready for it to be dispensed out of a stainless steel tap at the front.

“It is really very straightforward and simple,” explained Quest’s John Balanko as he gently pushed one of two taps at the front of the block to allow the water to come out into a bottle.

“Yes, it looks a little out of place and rather advanced for here, but it’s not, it’s really quite simple and the beauty is it is very low maintenance.

“The machine itself will only need a service once a month and we are training up some Angolans do be able to do that once we have gone back to Canada.”

The stainless steel taps – which dispense a fixed amount of just over one litre per push – and the aluminium platform, have been designed for easy cleaning and there are drains around the edges to collect any spilt water.

Balanko and his business partner Peter Miele, both from Vancouver, have a background in using technology to solve rural water supply issues in Canada.

A chance meeting four years ago with an Angolan resident in Canada, however, gave them a new African focus.

The AQUAtap has been designed specifically for a rural Angolan community where a lack of clean water and limited sanitation is a major contributor to the country’s high childhood mortality rate, which claims one in five youngsters before their fifth birthday.

Since the end of its three-decade civil war in 2002, the Angolan government has spent millions of dollars repairing infrastructure and providing basic services like water to its population of 19 million.

As part of the “Agua para Todas” (Water for All) scheme taps and boreholes have been installed in communities across the country, although according to the government’s own figures, around half the population is still without access to drinking water.

The village chosen by Quest Water Solutions, which was suggested by the municipal authorities, has one of those government-installed taps, but locals, most of whom are subsistence farmers without formal employment, told IPS it had not worked for over a year.

Carlos de Costa Gabriel, 25, welcomed the new machine and made no secret of the fact he wanted a job as its security guard to watch over it at night and prevent the theft of its solar panels.

He said: “We like this project very much. We have been using river water, which causes a lot of problems like vomiting and diarrhoea.

“I have two young girls aged three and five so I am very pleased that now we can get clean water because it will resolve the health problems.”

Mother-of-five Joaquina Xavier, 38, added: “We are very grateful for this. At the moment the water we use is so dirty and it is hard work bringing it from the river in buckets.

“The children get sick from the water, and some in my family have died because of this, but this machine, it’s really going to help.”

Balanko and Miele are working in conjunction with Angola’s Ministry of Industry, which is in charge of sourcing the equipment for the Agua Para Todas programme.

The device, one of two they shipped to Angola at no cost to the government, is being sold for a once- off fee of 150,000 dollars, which comes with a two-year maintenance guarantee.

“We can’t deny we are a for-profit company with a product to sell,” Balanko explained. “But I think you need to be able to make profit so that you can then give back.

“This is a one-off cost for the government, which they will absorb but the villagers will in return get clean, healthy water for at least the next 15 to 20 years.

The water from the AQUAtap will be free for the villagers, Balanko explained, a decision taken by the authorities.

The Canadians accept there are risks involved with the fact the water will be free, that the machine might be vandalised, or hijacked by people who want to sell the water commercially.

But they said they hoped the village would take pride in the new device to stop that happening. Balanko said: “Time will tell, but we believe it will be taken care of. We are going to have a security guard here and possibly flood lights for added security.

“We have told the villagers this is their machine and they must take care of it and we have engaged some elders and respected members of the community to help spread that message.”