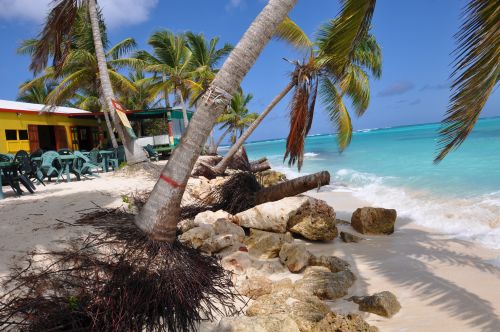 THE VALLEY, Anguilla, Mar 14 2012 (IPS) - When Hurricane Luis, a category four storm, lashed the tiny Caribbean island of Anguilla on Sep. 4, 1995, its forceful waves eroded all of the beaches, leaving vast areas of the shoreline carpeted with dead sea grass and debris torn from the coral reefs.

Four years later, Hurricane Lenny added to the woes, eroding coastal areas to a degree that they have never recovered from. The director of the Environmental Division, Karim V.D. Hodge, says the ongoing loss of coastline is hard evidence that Anguilla is being impacted by climate change.

He points to what was once a beach in an area that houses a popular restaurant. It has been taken over by the sea.

“That used to be a good 30-feet spread of white sand. Now it’s pretty much lapping at her doorstep and the coconut trees are beginning to fall into the water,” Hodge said.

A wharf in the Cove Bay area on Anguilla’s southern coast has collapsed very close to the shoreline that was once a beach.

“Between Cove Bay and Maunday’s Bay, there used to be a 30- to 40- foot sand dune and that used to be the main road to get to get to Maunday’s Bay. The dune no longer exists, so that’s a concept of how significant the erosion was as a result of hurricanes and groundswells as well,” Hodge added.

A report by the U.N. Educational, Scientific and Cultural Organisation (UNESCO), titled “Environment and coastal development in coastal regions and in Small Islands“, notes that like most of its neighbours in the English-speaking Caribbean, Anguilla’s beaches are essential to its social, economic and environmental well-being.

They serve to protect coastal lands from wave action, especially during hurricanes; provide an important recreational resource for tourists and local residents; and provide habitats for coastal plants and animals, including nesting sites for sea turtles.

They are also a source of fine aggregate for construction, and an aesthetically pleasing – and culturally important – part of the environment.

But with beach erosion an ever-growing cause for concern and climate change further exacerbating the situation, the tiny 91-square-mile British Overseas Territory with a population of 15,000 has been fighting back on two fronts – through training and the development of a climate change policy.

“We’ve ensured that we have the human resource skills,” Hodge said. “We’ve anticipated this, so the government was proactive. They trained some staff within the department of environment with the skillsets – (a) coastal engineer, another person trained in coastal management and climate change and sustainable development issues.

“That’s from the human resource aspect, but we are also looking at getting financial resources to assist us in terms of doing research, to collect the data that would help us to address those coastal challenges.”

A climate change policy for the island was drafted following national consultations held between 2008 and 2010. It is now awaiting Cabinet approval.

But Hodge, one of three authors of the document, laments that government agencies are moving too slowly in putting legislation in place that would qualify Anguilla to drawn down funding to assist it in it in mitigating the effects of climate change.

“There is one key thing that has not yet been done for Anguilla. A key piece of legislation, the Environment Protection Act, which speaks to the element of climate change, it has within it the means for Anguilla to allow the United Kingdom to extend the U.N. Climate Change Convention to Anguilla.

“That piece of legislation is still pending, being held up by internal issues between some key agencies that need to be ironed out. In my mind, it’s petty. Had that been done I think we would be able to source and secure funding,” he added.

The chair of the Anguilla Renewable Energy Office, David Carty, agrees, telling IPS he has always been concerned that Anguilla has never been as aggressive and as aware of the environment in governance, even before the climate change issue hit the radar.

“Most people don’t give two hoots about climate change. My own view is ‘out of sight out of mind’, and the insidious part of climate change is that we cannot see it,” he said.

But he said the evidence, including the standard red flag of reef degradation, is quite glaring.

“I am seeing it. The vegetation is a lot lusher than it used to be in the past and I have a strong suspicion it is because of a slight increase of CO2 in the atmosphere and the fact that photosynthesis depends heavily on CO2,” Carty said.

Carty, a former speaker of the House of Assembly (Parliament), said he has presented pictures to colleagues both here and abroad, showing Anguilla many years ago when it was desert-like and scruffy, especially during the height of the dry season, and what it looks like today.

“There are other things like coral degradation, which I know is not all climate change, but I am a boat guy (a boat builder) so I’ve always been close to the marine environment and when you sink your head under water you can see dramatic evidence, particularly in our reef systems.

“Unlike bigger islands, we don’t have runoffs. We don’t have issues of huge sewage discharge into the sea, in fact we almost have zero,” he told IPS.

Carty said he could “see certain degradation in coral which had nothing to do with depletion of predators and the upset of the ecosystem by overfishing when we overfish the predators and we create a chain reaction downwards.

“I don’t think the average person takes note of these things,” he said, blaming sections of the U.S. media and the Evangelical Christian movement for downplaying the issue of climate change.

As yet another hurricane season approaches, Hodge said there is now a government department in place to ensure that the development of Anguilla’s coasts is planned very carefully so that buildings are a safe distance back from the beach.

“What we have are setback guidelines that are enforced by the Physical Planning Department. In Anguilla, like most of the rest of the Caribbean, land is dear to people who own 95 percent of the land.

“So it becomes a sort of a challenge for our colleagues in the Physical Planning in terms of being able to implement that without interference from higher-ups. It’s a small society, so those are the concerns that are real,” he told IPS.

*This article won the Print Category in the 2012 CARDI-CTA Regional Media Awards on Climate Change.