CALAIS, France, Mar 22 2012 (IPS) - It’s more than two years since French police demolished the migrant squatter camp in Calais known as the Jungle in September 2009. At the time the widely-publicised demolition was hailed by the French and British authorities as a major blow to the smugglers or passeurs who facilitated illegal immigration across the Channel. 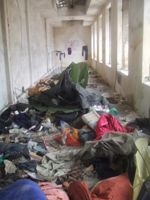 At a migrant squat in Calais. Credit: Lara Stanley/IPS.

Since then a steady stream of migrants and asylum seekers has continued to pass through the city and the Nord-de-Calais region hoping to reach the UK. Today a shifting population of between 150 to 200 migrants continues to live in squats in and around this windswept northern French city, despite a remorseless campaign by the Calais authorities to drive them away.

The local gendarmerie, the French Border Police and a permanent deployment of riot police have all contributed to this effort, through weekly and sometimes daily police raids on migrant squats, arbitrary arrests, evictions, and house demolitions.

In the last few weeks there has been a noticeable escalation in the frequency and intensity of these activities. Last Thursday police evicted 35 migrants from the dilapidated prefab buildings in the avenue Blériot known as Africa House, under the supervision of the sub-prefect of the Calais region Alain Gérard.

The following night police raided the food distribution centre where some of the evicted migrants had camped, destroying their tents and confiscating their belongings.

Since then there have been two more evictions from various squats and camps around the city. The authorities have also increased their checks and controls along the truck depots beyond the city near Dunkerque, where a shifting population of some 400-odd migrants en route to the UK have attempted to stay in order to escape the police harassment in the city.

Some local NGOs attribute this escalation to the French presidential campaign and the crackdown on legal and immigration by beleaguered President Nicolas Sarkozy; others talk of renewed pressure from the UK government to make Calais ‘migrant-free’ in preparation for the London Olympic Games.

Whatever the reason, these evictions have added a new ingredient of paranoia and anger to the harsh underground world that Calais’s migrants are forced to inhabit. When we tried to visit the roofless and gutted former lace-making factory in the Rue de Quatre Coins, we were chased away by a hyper-aggressive group of migrants who believed that we were in league with the police.

Despite the police pressure, migrants continue to converge on the designated food distribution centre near the Calais docks, where NGOs provide two or three meals a day throughout the year. The migrants include Iranians, Iraqis, Afghans, Sudanese and Palestinians. One Iranian arrived three days ago, after running into trouble with the authorities because of his religious views. Others have been here for months.

An Afghan named Hassan in his early thirties tells us how he had lived for 12 years in the UK and had two children and his own fast food business in Bradford, before serving six years for assault. On serving his sentence he was deported back to Kabul. Now after three months in Calais, he has agreed to accept a voluntary repatriation package to Kabul, even though it means that he might never see his children again.

His reasons are simple: “I can’t stand this any more. Europe is the worst place I’ve ever been to.”

Abed is another Afghan who has come to Calais hoping to reach the UK, with his 14-year-old daughter Fawzia. He has applied for asylum in France, leaving his wife and two other children in Greece. Until his appeal is successful they cannot join him in France and he cannot go there to see them.

The asylum appeal process in France is slow and there is no guarantee of success. Since 2009, 116 asylum seekers have been recognised as refugees and 12 have been granted temporary protection out of the 285 applicants that the local UN Refugee Agency (UNHCR) office has dealt with.

Many migrants passing through the city are looking for work, not asylum, and their presence fluctuates according to shifting economic circumstances.

The city’s migrant population now includes a number of Albanians who have come from Greece. Among them is Roland, a tall, long-haired young man in his mid-twenties who lost his job as a result of the Greek economic crisis. He was headed for work in the UK.

“Greece is finished,” he says, “there’s no work for anyone now. The Greeks can’t even feed their own families.”

Whether looking for work, or refuge from war or persecution, these migrants constitute a surplus population that neither the UK nor the French government wants – but which they cannot get rid of.

Together with the tough policies, the Calais authorities have established the food distribution centre and even pay the rent for one of the NGOs that provides their daily meals. The authorities also provide migrants a winter shelter, a medical clinic and showers.

But none of this is publicly acknowledged, and the presence of a police car outside the food distribution centre is a reminder of the policy of toughness and deterrence that both the local authorities and the national government prefer to present to the public.

The sub-prefect of Calais recently boasted of his intention to drive the city’s migrants into Belgium, in a less than whole-hearted commitment to the principle of pan-European solidarity. And while some migrants have been dispersed, others continue to arrive, looking for costly passage across the Channel from the local passeurs, while they seek to evade the police.

Few people expect them to stop coming to a city that has become a symbol of Europe’s ruthless and dysfunctional response to 21st century migration. And with a president determined to mobilise anti- immigrant sentiment to stay in power, and the Pas-de-Calais region offering training facilities to Olympic athletes for the London games, the city’s migrants are clearly even more unwanted and superfluous than usual, and repression is the order of the day.