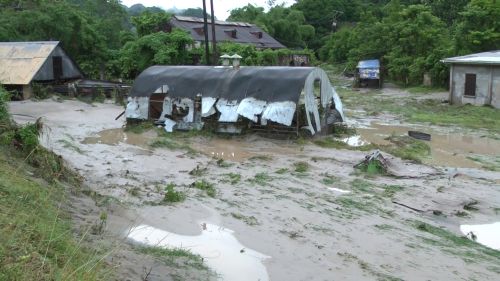 ROSEAU, Dominica, Mar 23 2012 (IPS) - Dominica presented its “2012-2020 Low Carbon Climate Resilient Development Strategy” to donors including the World Bank on Wednesday in a bid to gain wider access to funding and position itself as a regional leader in renewable energy.

“Dominica, the Nature Island of the Caribbean with an excess of 60 percent forest cover, has the potential to continue to be one of the few-carbon neutral countries in the world as we today explore the possibilities of harnessing our tremendous geothermal potential,” said Environment Minister Dr. Kenneth Darroux.

By the end of the donors’ conference on Friday, Dominica hopes to obtain pledges totalling 60 million dollars to undertake projects ranging from sea defence walls to food security, renewable energy and water resources in the short to medium-term, along with as much as 200 million dollars for long-term projects.

Consultant George Romelli, who helped draft the document, said it is focused on low-carbon growth, sustainable development, poverty alleviation, and a range of other issues.

The strategy, which is being supported by the nine-million-dollar loan envelope available to Dominica under the World Bank’s Pilot Programme for Climate Resilience (PPCR), outlines the island’s determination to have a “green economy” by 2020.

Romelli warned that while Dominica is fortunate to be in a position of being carbon-neutral, it is losing forested areas because of natural and human events.

In 2011, flooding and landslides due to unseasonable intense rainfall caused in excess of 100 million dollars in damage. The previous year, the island suffered its most severe drought, followed by a hurricane.

Local authorities say that these combined events inflicted a severe shock on the agriculture sector, which employs 25 percent of Dominica’s labour force, and generates some 15 percent of gross domestic product.

Prime Minister Roosevelt Skerrit said that the island’s vulnerability to climate change is exacerbated by its present economic situation, socioeconomic structure, and high concentration of infrastructure along the coastline.

“To date, narrowly-defined mitigation and adaptation projects have dominated climate change action policies taken by Dominica. This has resulted in the accumulation of many efforts, isolated in nature, to respond to a crosscutting issue,” he said.

Skerrit said that new and innovative programmatic approaches are necessary to meet the challenges and uncertainties of climate change, and that development processes must be rendered more climate- resilient and lower in carbon emissions.

“The Low-Carbon Climate-Resilient Development Strategy will not only serve as the programmatic nexus for capturing conventional and innovative sources of sustainable development and climate financing, but should also assist facilitate Dominica’s transformation to a climate-resilient economy while implementing, monitoring and building upon existing low-emission climate-resilient development projects and programmes,” he added.

The 69-page document notes that Dominica is amongst few countries that can be termed “carbon neutral” in light of its limited use of fossil fuels – 28 percent of the island’s energy comes from renewable sources – and system of protected areas that serve as carbon sinks.

Dominica is not likely to go the route that Guyana has taken in terms of trying to get climate change funds in exchange for not cutting down its forests.

Darroux said Dominica does not have the kind of vast expanses of forest that Guyana does, and such a project in Dominica would not be as lucrative, but that the island would most likely adopt its own “Redd-Plus” programme.

The general pattern of land use has been dictated by topographic limitations. The highest, most rugged elevations in the interior have remained inaccessible and therefore forest cover predominates, although there has been gradual loss of forest cover in the lower elevations.

The Food and Agriculture Organisation’s (FAO) Country Profiles on Forests, Grasslands and Dry Lands cites a percentage reduction in forest cover relative to land mass area of 65 to 61 percent over the period 1990 to 2000.

Much of the recorded forest loss is due to the sale of state lands and subsequent conversion of forest cover. Most of these lands were given over to agricultural production and ultimately to housing.

“By extension, the transition from larger-scale agriculture to small farms has also had implications for implementation of land conservation measures and efforts to enhance the resilience of natural ecosystems to address climate change concerns. As holdings become smaller, farmers tend to cultivate the full acreage within the holding in short-term crops to maximise financial returns,” the report says.

“Trees that would otherwise maintain the soil and serve as carbon sinks are often removed resulting in accelerated land degradation in fragile environments.”

It states also that climate change, including increasing ocean acidification and changes in sea temperatures, are affecting fishery resources and migration patterns with consequent impacts on the sustainability of Dominica’s fishery sector, livelihoods, human health and prospects for food security.

In addition, due to the island’s vulnerability to hurricanes, the fisheries sector is continuously trying to recover from the damage caused by these storms.

Dominica has no petroleum resources and all the energy required to sustain development is imported. Electricity constitutes the primary source of commercial energy for industrial and other uses, while approximately 8,000 cubic metres of wood fuel are used domestically.

Darroux said the goal is to move away from the importation of petroleum products.

“By developing and utilising renewable energy, we intend to reduce and eliminate the importation of petroleum products which are becoming more and more expensive while at the same time emitting greenhouse gases that causes climate change,” he said.

Darroux said the tests being carried out to determine the extent of the island’s geothermal reserves are part of the new strategy of being less dependent on petroleum.

“The vision is that the funds saved by exploiting this clean and cheaper form of energy can be used to build sea defence walls and other critical infrastructure that are required to withstand the damaging and destructive effects of climate change.”